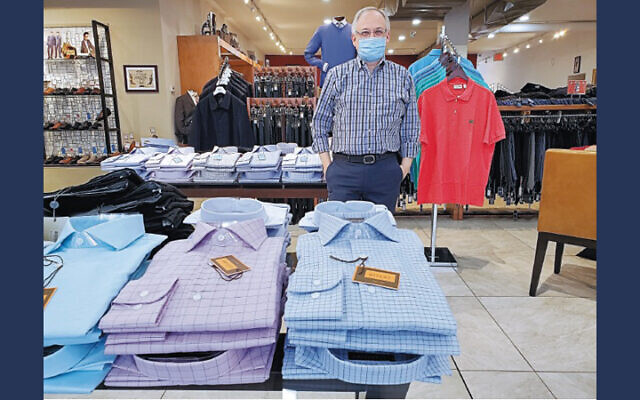 Sam Rappaport of Emporio stands in his Teaneck store.

Despite the financial effects of the quarantine, Sam Rappaport always put health and safety first.

In fact, he said, he closed the Emporio store in Teaneck a week before the New Jersey governor mandated the closure. “One Sunday morning I heard our town manager, Dean Kazinci, on the news saying that Teaneck is ground zero,” he said. “I closed immediately.” Emporio has five stores, two in New Jersey, three in New York. The other four closed the next week.

On the whole, he said, he’s been lucky — except for one co-worker in Brooklyn who still is on a ventilator, his family and his employees all are well. Business, of course, is another story. During the early days, “I had a little group chat with other stores on the block,” Mr. Rappaport said. The others were surprised at his fast shut down.

“But in my head I said, ‘Let’s take our medicine. We’ll close for 14 or 15 days and get it over with.’” He never expected it to last for three months, and the timing particularly was bad for his business. “People were going away for Passover,” he said. “They’d usually come in and get a new outfit. It’s our busy season. We lost a lot on Passover suits” and on outfits for spring bar and bat mitzvahs. “We do bar mitzvah tailoring late, since boys can grow. People canceled and asked for refunds.”

Unlike food shops and certain other businesses, “curbside doesn’t work for us,” Mr. Rappaport continued. “We do some business on our website. People familiar with us may reorder. But suit and pants alterations don’t lend themselves to this. It was quite a blow — the busiest third of the year: spring and summer stuff, weddings, bar mitzvahs, graduations, Shavuot, Father’s Day.”

Still, he said, “Everyone’s safety and health comes before everything else. Now, we’re having people start to come in by appointment. They’re still starting to think about weddings and bar mitzvahs at the end of August and hoping their kids will go to camp.

“It will be one family at a time, with masks. Everything will be clean.” 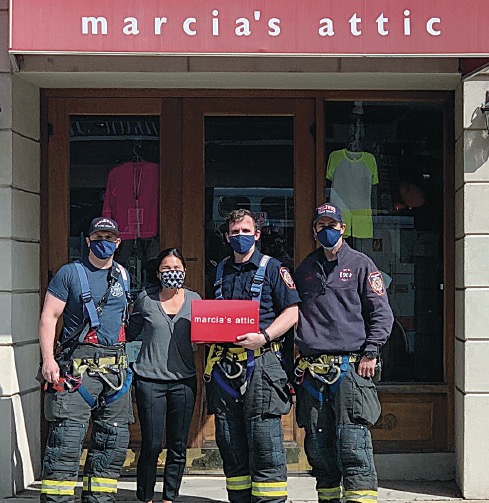 Mr. Rappaport said he thinks normal times will return. “They’re rushing the vaccine like never before. Money is secondary. I appreciate that. They’re not wasting time. Once that comes out, people will be more relaxed.”

He said that he doesn’t think large businesses have any advantage over him because “nobody carries the type of quality, dressy clothing we do. It’s not available there.” But, he said. “It’s simply unfair. We could have opened a few weeks ago.” Certainly, he wouldn’t be drawing the hundreds of customers who frequent Lowes and ShopRite. “And it doesn’t make sense,” he added, explaining that someone can fly here from California, sitting eight inches away from a stranger. “And I can’t open our doors? I would have loved to see us open the week before Memorial Day. Not going back to business as usual, but limiting it to people shopping.”

Mr. Rappaport said that Emporio did get a small PPP loan from the government, enough to help for one month. But he pointed out that “people were taken care of with generous unemployment benefits. I’ve got 50 people working in my five stores. One of the things that helped was that they were taken care of.”

Victoria and Syed Rizvi have owned Ice Cream on Grand — an artisanal ice cream shop in Englewood — since early 1996. It’s a seasonal enterprise, and they are realists who clearly love their community. “My husband always says he would rather suffer financially than make people suffer physically,” said Ms. Rizvi in a phone call just before the store was allowed to reopen.

“We were supposed to open March 23,” she said. “We even put an ad in the paper.” Ironically, “we ordered our supplies on the 16th and [Gov.] Murphy closed businesses on the 17th.” The ad announced “Free Cone Friday,” a tradition the store has maintained each year on the Friday before it opens and again before it closes.

In the current climate, making the decision to order supplies was difficult. “We ordered even though we were nervous,” Ms. Rizvi said. “Syed insisted on it. It was a tough decision, but he was eager to open.” She explained that her husband had overseen “major landscaping” on the property, adding new trees, and also had bought a new double-size freezer to keep up with the usual demand. “Syed had been working on the new patio for more than two years. It was his passion.”

The pre-ordered supplies also were prepaid. “He has a high standard of responsibility. He wouldn’t return anything. He literally sacrificed himself because he didn’t want to be unfair.” 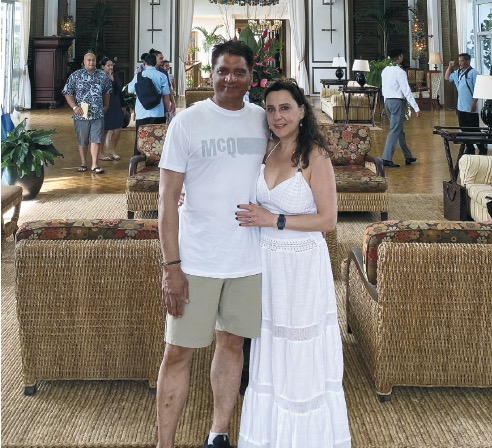 Syed and Victoria Rizvi were on vacation in Hawaii when covid-19 hit.

The Rizvis did not immediately grasp the full extent of the quarantine situation, Ms. Rizvi said. “We were in Honolulu. We flew back and went to Target. There were no paper goods. We didn’t know. We had to borrow some Bounty.” Ms. Rizvi noted she has another job, at Merck pharmaceuticals, she has been helping out at the ice cream store more than usual this year.

The shop opened on June 1. Ms. Rizvi said that because Ice Cream on Grand is a food store, “we could have opened earlier, but we thought it was unsafe.” There were a total of 138 transactions that first Sunday; the store was open for five hours. “We sold so much ice cream it was gone by 3,” she said. “The wait on line was 45 minutes to an hour” and the line stretched far out the door and down the street.

Just for comparison’s sake, last year, on June 2, the store had 636 transactions, she said, suggesting that customers may not be buying what they used to because there is less money available for luxuries and people are saving their money.

Still, families clearly were excited. “There was nothing much going on in their lives and they were thrilled by being able to have a goal,” she said. “It was a very good experience. People were excited and grateful.” She noted that the store now sells its ice cream in three container sizes: two pints, three pints, and four pints. The ice cream is packed in “a freezer-friendly styrofoam container.”

As per the sign posted at the entrance, customers are required to wear face masks. So too are the store’s young helpers, the teenagers who take customers’ orders. They used to do that task by hand, but soon they will switch to hand-held computers that communicate with the cash register. The system is similar to that used at Panera, Ms. Rizvi said. Soon that will be the new normal, but, she said, “Every day is a new normal.”

The store also has a professionally made shield. It’s “beautiful,” Ms. Rizvi said, and it will protect both consumers and staff when the door finally is opened. In the meantime, the store’s large parking lot will continue to function as a drive-through.

In terms of government aid, Ms. Rizvi said that she and her husband couldn’t figure out the PPP system at first, but they finally got something the week before Memorial Day. “The rules kept changing,” she said.

Susan Silverstein, the buyer for Marcia’s Attic in Englewood, said that “the quarantine definitely changed the way we do business. We have always been a full-service store, making free local deliveries and curbside pickup. The quarantine has forced more of our customers to utilize those services.”

What the store sells has changed as well. Because people have been staying at home, “they’re looking for more casual styles, and lots of toys to make home time more fun for everyone,” Ms. Silverstein said. The store has been able to make accommodations for customers, but “that’s not new,” she added. “We pride ourselves on making all of our customers happy.”

Ms. Silverstein said she thinks the store actually has an advantage over big box vendors because of this personalized service. “We know our customers,” she said, and offer benefits such as single-customer store appointments, free gift wrap, and same-day free local delivery.

As it reopens, she said, the store is observing stringent safety measures. “We are sanitizing the store frequently, cleaning all surfaces with disinfectant. We will have hand sanitizer available, and limit the number of customers in the store at all times. We will require customers to wear masks, as well as having our staff wear masks.”

To make sure the rules are followed, the store’s Facebook page placed this message next to the announcement that it is reopening: “Customers must wear a face mask and use hand sanitizer before entering the store/We will be following the CDC guidelines for social distancing/We will be steaming clothing and sanitizing the store throughout the day/The safety of everyone is our foremost concern.”

Neither Trang Lio, who owns Marcia’s Attic, nor Ms. Silverstein were idle during the quarantine. “We have been busy cleaning and getting supplies ready for reopening,” Ms. Silverstein said. “We have been posting a lot of merchandise on Instagram, and selling that way, even though the store is closed. Kids still need clothes and people still need gifts. Life is on pause but it hasn’t stopped. Our buyers are still shopping the market on line … so that when we reopen, we can delight our loyal customers.

She also has a message for those customers: “We wish everyone a happy, healthy return to life, and offer a great big thank you for all of the support given during these unprecedented times!”