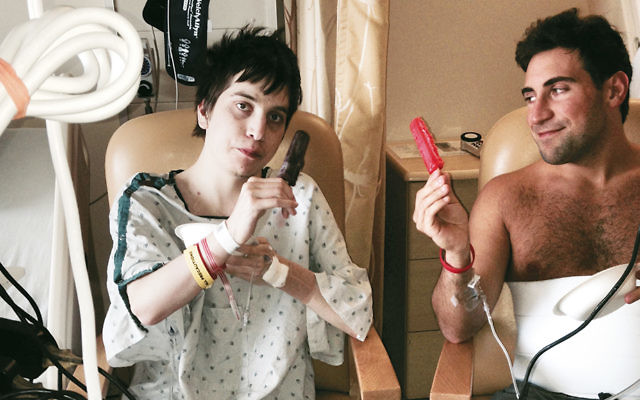 Corey Zaretsky is training hard for the TCS New York City Marathon on Sunday, November 6. Yet he confesses that he does not enjoy running.

He chose to participate in the high-profile marathon to raise money for the National Kidney Foundation and to raise awareness of the critical need for live kidney donors.

And one other thing keeps his legs pumping: He wants people to see that someone who donated a kidney is perfectly capable of running a marathon.

Corey, 26, was raised in Upper Saddle River. His only sibling, Matty, now 24, was born with a rare genetic disorder that negatively affects many of his bodily systems, including his kidneys.

“It was always known that one day he’d need a kidney transplant, but we assumed it would be far in the future,” said Corey, who now lives in Manhattan.

That time came sooner than expected. During 2013, Matty was in and out of the hospital, suffering from repeated bouts of pancreatitis. In May 2014, a specialist at the University of Minnesota Medical Center surgically removed Matty’s pancreas, gall bladder, spleen, and appendix, as well as part of his intestines. Next, the overwhelming stress on Matty’s body that year caused his kidneys to fail.

Realizing that his brother would need a new kidney soon — and knowing both parents had health conditions that ruled them out as donors — Corey already had begun the rigorous testing process the previous March. He wanted to know if he could donate a kidney to his brother.

“They found out I was as perfect a match as they could get,” said Corey, who works as director of travel for Elite Travel and Media Group. “I’ve always looked after my brother — we are best friends — and there was never a question in my mind that I would do this. If you’re lucky enough to have a sibling close to your age, that person will probably be in your life the longest of anyone in your family, and you want to make sure he’ll be around.”

The surgeries took place on August 14, 2014, at the University of Minnesota Medical Center. A day later, both brothers were out of bed. 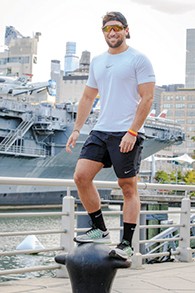 Corey Zaretsky hopes his donation of a kidney to his brother will spur more donors to come forward.Christian Miles

“It was instant gratification for me,” Corey said. “Matty is a completely different person. Within a week his color was back, and he regained a normal body weight after having lost a tremendous amount while he was sick. He went 20 years of his life lagging behind, and his body is finally working the way it should.”

Matty plans to move in with Corey in December, after finishing his final semester at Sarah Lawrence College in Bronxville, N.Y.

Jane Zaretsky said that she and her husband, Steven, always encouraged their sons to bring a positive change in the world and help people in need.

“It ended up that Corey’s brother Matty was the one in need, so Corey did whatever he could to help save Matty’s life,” she said. “We are very proud of both boys. We raised them to be giving, respectful, and empathetic to those less fortunate. To us, these are the respected values of a strong Jewish family.”

Her parents, Florence and Edward Paley of Saddle River, are strong supporters of Israeli and Jewish causes and are active members of Temple Emanuel of the Pascack Valley.

Now that Corey has saved his brother’s life, his attention has turned to publicizing the need for more kidney donors.

“As of January 1, 2016, about 122,000 people were on the transplant list waiting for organs, and another person is added to the list every 10 minutes. Of those 122,000, about 101,000 are waiting for kidneys,” Corey said, citing statistics from the American Transplant Association, the National Kidney Foundation, and Organdonor.gov.

He noted that kidney and liver disease kill about 120,000 Americans every year. That makes those diseases more lethal than either breast cancer or prostate cancer.

“Each year, 8,000 people die waiting for an organ,” he said. “So there’s clearly a problem in the thought process behind the idea of donating an organ.

“It’s very important to me that you know if you donate you’re saving that person’s life, and you are also impacting the lives of that person’s family, friends, and co-workers. It’s definitely a tough commitment to make, but when you see the impact on not just the person but on the dozens of others around that person, it makes it worthwhile.”

The same could be said for his decision to run the marathon. Though his grandfather, Bob Zaretsky of Upper Saddle River, has participated in four marathons and is helping Corey train, the young man much prefers playing baseball and soccer.

“In my mind, there aren’t a lot of things crazier than running 26 miles,” he said. “I don’t even like to run around the block. But it’s a good opportunity for me to be unique and challenge myself and push my message out there.”

Corey started with a modest goal of raising $5,000. When that goal was met in less than two days, he doubled the amount to $10,000 — and he’s almost there. His fundraising page is at https://www.crowdrise.com/nationalkidneyfdnnyc2016/fundraiser/coreyzaretsky. In total, runners on the National Kidney Foundation team have so far raised more than $28,000.

Corey hopes that when people see him running they will understand more clearly that donating a kidney does not compromise the donor’s own life. Rigorous medical and psychological screening assures that only people in excellent condition become donors, and the lack of one kidney does not change the picture.

“People are so afraid that if they donate they won’t be able to live normally and I want to show them that that’s completely false,” Corey said. “My real goal in running the marathon is to show you can donate an organ, save someone’s life, and still fulfill all your dreams.”