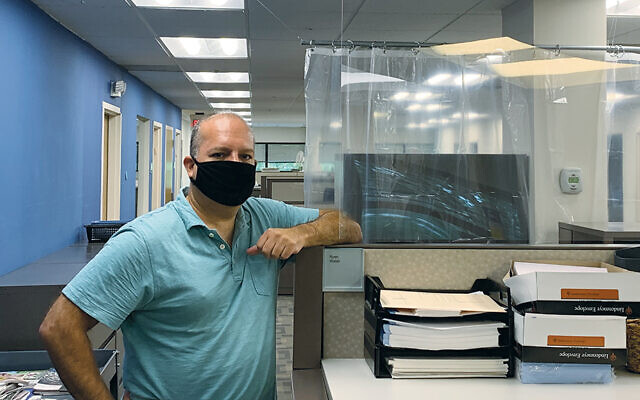 Jason Shames, the CEO of the Jewish Federation of Northern New Jersey, is in the people business.

“At the core, we are a community-building organization,” Mr. Shames said, and when you talk about being part of a Jewish community, you never assume that the community will be virtual.

Now, some of the people have begun returning to the organization’s offices in Paramus. “Not being able to effectively interact with each other as staff is not helpful,” Mr. Shames said.

The reopening has been “slow and meticulous,” he said, following federal guidelines from the Occupational Safety and Health Administration and the Center for Disease Control, as well as guidelines issued by the state of New Jersey.

That’s involved a lot of changes.

“We’re trying to adapt to the behaviors that are now required for working in an office, so when things improve and we can have visitors back in the building, we don’t have a learning curve, so we’re ready when visitors, donors, and the board can come back in,” Mr. Shames said.

The federation reopened the building last Tuesday, and has outlined a six-week process, detailing how the staff will return gradually and get used to the new rules.

These include allowing only one person at a time in an elevator or a rest room, and closing common areas, such as kitchens.

“You’re not supposed to enter anyone else’s office,” Mr. Shames said. “In the hallway, you’re supposed to be wearing a mask. The point is to get used to this sort of office environment, so when we’re ready to welcome the community back into the building, we’ll have worked out the kinks, we’ll be safe, we’ll be comfortable, we’ll know what we’re doing.” 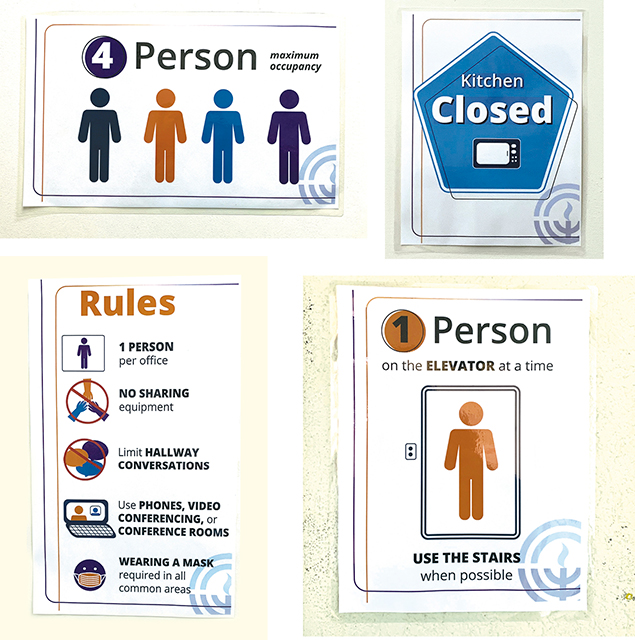 These signs are among the instructions that the federation’s employees, and later their visitors, must follow.

“We replaced the filters with HEPA filters,” Mr. Shames said. “We did the deep sanitizing of the office right after we shut down for COVID and prior to our return.”

And each Friday, the building is shut down “to allow for a more thorough cleaning of the offices and cubicles.”

Mr. Shames said that he hopes that visitors will be allowed into the building “sometime in the fall. It depends on the state of the virus and what the recommendations are from the CDC and Department of Health. We’re looking into getting one of those automatic temperature machines for when people come in.”

The federation “wants to set an example for the community, and lead,” he said.

Among the organizations the federation supports, “each agency is slowly starting to get to a better place. Thank God the situation at the Jewish Home and Daughters of Miriam are getting much better, with the reduction in the number of cases. At the JCC, the day camp opened up and the pool opened up last week as well. JFCS” — Jewish Family and Children’s Services of Northern New Jersey — “is continuing to provide food pantry services. We’re all in a better place than we were two months ago.”

Nonetheless, “everyone is pretty much preparing a doomsday plan if we have to shut down again,” he said.

The months out of the office were “challenging,” Mr. Shames said. “Working remotely in our business is not as productive and efficient as face to face is. Sitting down and having a coffee or a meal with someone is more effective than doing it on the phone or Zoom. I’m yearning to get to the point where I sit down with people again.

“Our business is about bringing people together, it’s about dialogue, it’s about engagement. It’s not same connection on Zoom. We’re a people business. We bring people together. The sooner we can get into a consistent pattern that resembles what we’ve become accustomed to, the better — with an acknowledgment that it’s never going to be the same again.”

The federation has put some of its traditional public activities back on the schedule, but in the new circumstances, “the logistics are extremely challenging,” Mr. Shames said. The annual “Supplies for Success” program, in which volunteers prepare school supplies for needy children, has been reconfigured for an era of social distancing. “We have to do it outside. We have to put up tents. Nothing is easy in this environment.”

Similarly, the Israeli Film Festival has been reconfigured into a drive-in experience. “Heading Home: The Tale of Team Israel” will play on August 24 — that’s a Monday evening — at Demarest Farms in Hillsdale.

“It’s going to be addressing all the needs of the Jewish community, including those that are covid-based,” Mr. Shames said. “If we see an increase in need for social welfare, for special scholarships for day schools, the annual campaign is going to address those needs. We’ve had to shift our whole allocation model to be more nimble.  The priorities and methodologies for distributing funds is going to be based on the changing needs of the community. We’ve adapted, we’ve evolved. It’s not going to be based on the same old, same old.”