Rabbi Barry Schwartz pauses during his trek in Tasmania.

It’s almost at the end of the world. It’s an island 250 miles south of Australia. It’s the last land mass before Antarctica.

My wife and I love what Americans call hiking, Europeans call trekking, and Aussies call bush-walking.

We love the world-famous treks we have been blessed to experience, such as the Inca Trail to Machu Picchu in Peru, the Himalaya Path to Mount Everest in Nepal, and the Routeburn Track to Milford Sound in New Zealand.

We love the exotic treks that we have walked in wondrous places like Iceland, Switzerland, Patagonia, South Africa, and Uganda. 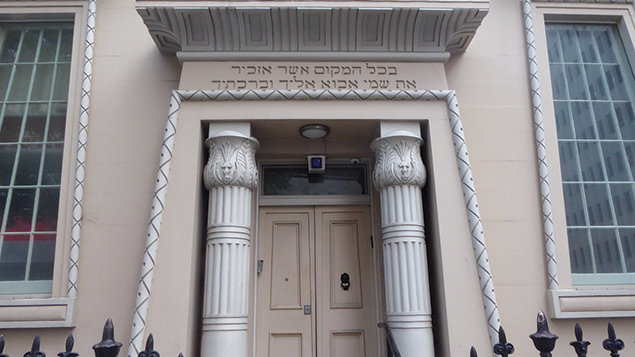 The entranceway to the Hobart Hebrew Congregation.

And we love the off-the-beaten-track gems that we have discovered in places like Newfoundland and the Azores.

Avid world-trekkers will tell you that remote Tasmania offers some of the most dramatic coastline walking in the world, not to mention a unique mix of sub-alpine tarns and moors in the interior. And sharing the path at any moment are those uniquely weird Australian marsupials — kangaroos, wallabies, padymelons, along with wombats, echidnas and, of course, the elusive Tasmanian devil.

Tasmania did not disappoint — and we saw everything but the devil.

But the real reason for my writing is about what we saw on Shabbat, which was our first day in Tasmania. We saw the Hobart Hebrew Congregation.

Would you believe that this beautiful little synagogue, with its rare neo-Egyptian revival façade, a style that was popular in the mid-19th century, is the oldest one in Australia?

Would you believe that the congregation was founded by two paroled Jewish convicts in 1845?

Would you believe that the day I went there, only two people besides us were were there too — but that one of them turned out to be an expat friend of my friend who moved to Tasmania 20 years ago? 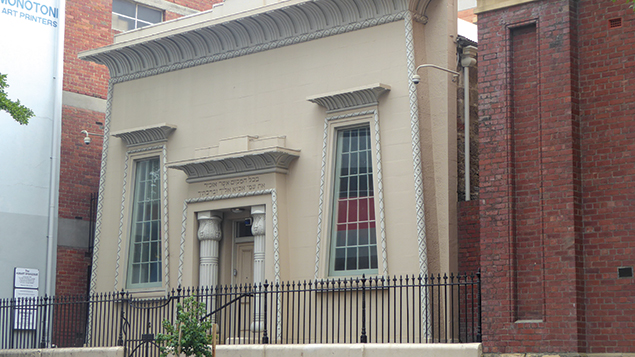 The synagogue was built next door to “Temple House,” now headquarters of the Tasmania Police.

When the tiny Jewish community in Hobart requested a synagogue in 1842, the governor refused to make a plot available, citing a law restricting Crown land grants to Christian organizations. Judah Solomon, a paroled Jewish convict from England who had prospered, stepped in to donate land from his large home near city center, which had been dubbed “Solomon’s Temple.” That house, which to this day is called “Temple House,” still stands next door to the synagogue and is the headquarters of the Tasmania Police.

Judah and his brother Joseph, another paroled convict, rallied their fellow Jews, and a few overseas philanthropists, including the famous Sir Moses Montefiore, contributed money to help them build the synagogue. The donors’ names, and the amounts they gave, are prominently inscribed on the rear synagogue wall. Numbered benches that originally were at the back of the synagogue were for the use of convicts and the poor. The shul’s fact sheet proclaims that “The Hobart synagogue is thus believed to be the only place of Jewish worship in the world with seats set aside for convicts.”

A large and beautifully inscribed plaque on another wall caught my eye because I completed a rabbinic thesis many years ago on the long history of the Jewish prayer for the government. The inscribed text was a prayer for the welfare of Queen Victoria and the royal family. It is said that non-Jewish guests were so impressed by the music and fervent prayers for the Crown at the dedication service that they contributed the princely sum of 100 guineas to the congregation.

Given that much of Tasmania served as a penal colony (the most prominent site in nearby Port Arthur is now a World Heritage Site that made for a fascinating visit), and that Jewish convicts were required to attend Sabbath worship, it is understandable that the congregation sent an early inquiry to the Chief Rabbi in London asking whether convicts could be counted in a minyan, and whether they could be called to the Torah. The response was affirmative to the former and negative to the latter.

Sadly, we were not even close to a minyan on my visit. There are not many Jews left in Tasmania. But one of them spoke to me in a decidedly un-Australian accent. When he found out that I had lived in Cherry Hill, he asked if knew someone named David Lerman, his former roommate. I smiled and told him that David was a dear friend and a past president of the Jewish Publication Society, of which I am the head.

Tasmania may be as far away as it gets, but Jewishly speaking it’s a small world after all!

Barry L. Schwartz is the editor in chief and CEO of the Jewish Publication Society and the rabbi of Congregation Adas Emuno in Leonia.