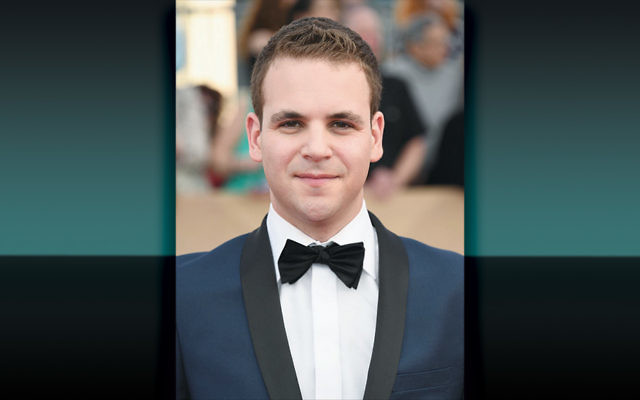 Sometimes theater is intellectually challenging, getting in under your defenses and making you consider big questions, or even reconsider your established answers to them.

Sometimes theater is emotionally wrenching, getting in under your defenses to go straight to your core, making you weep or shake or just simply yearn.

And sometimes theater is just plain fun, silly and funny and engrossing. Sometimes it just makes you happy.

On Sunday night, the Palisades Players at the Kaplen JCC on the Palisades in Tenafly will be going for just plain fun. The group will present a recreation of a 1945 radio melodrama, “The Haunting Hour,” and will surround it with jingles and songs that might not be exactly from that period but will be evocative, silly, and engaging. (We’re talking “Snap, Crackle, Pop — Rice Krispies!” the Chiquita Banana song, and “The Good Ship Lollipop” here.)

The evening, a fundraiser for the Palisades Players, will star one of the most prominent graduates of the JCC theater program, Alan Aisenberg, a 24-year-old actor and producer who is best known (and in fact is very well known) for his work on the Netflix hit “Orange Is the New Black.”

Mr. Aisenberg grew up in Englewood Cliffs, where his parents still live.

“I started at the JCC when I was 4 or 5,” Mr. Aisenberg said. “My parents signed me up for a Sunday class. I’d gone to the JCC for preschool and summer camp, and then they saw a flier for the theater class. They said, ‘Alan, you’re a ham,’ and they signed me up on a lark.”

That did it for him, for life.

His parents have no theatrical background, he said. “They’re both doctors from Argentina — Alejandra Goodman and Javier Aisenberg. They were born a few miles apart, just a few days apart, and then they met in New York, 20-something years later. There was always music in our house — my dad playing the Beatles, or my mom playing “A Chorus Line” or “My Fair Lady,” but they had no other connection to musical theater.

“But they saw the signs in me. I used to put on shows at home, with my younger sister, with little toys. We’d make our parents sit for hours at a time, watching us. They’d want to get up, but I would say ‘No no no! Just wait! Just two more acts!’ And then my dad went to Staples and bought a roll of tickets for us to use.

“I also wanted to play baseball, and I played Little League and fall ball. 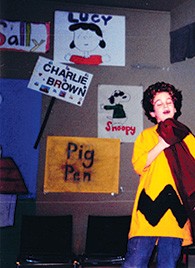 Alan Aisenberg when he starred in “You’re a Good Man, Charlie Brown” at the JCC.

“I applaud my parents for giving me the chance. It is insane, how wonderfully supportive they have been, even with things that are entirely outside their domain. They knew nothing about this world from a professional standpoint, but they dove into it for me.

“They are the two best people in the world.”

A not insignificant number of actors have emerged from the JCC acting program that gave Mr. Aisenberg his start, although that is not its main focus. “We had no idea that this program, which was such a fun thing, was known for churning out kids who were becoming professional actors,” he said. “I didn’t know when I was doing it that there were agents in the audience. I think that even when I started it, though, just a few years after it began, that a couple of kids had been working in the city on commercials. But the people I grew up with in this program in Tenafly are continuing to work.

“There must have been something in the water.”

More seriously, he said that the something that makes the program different is supplied by its longtime director, Deborah Roberts. “It’s such a healthy balance of fun and discipline,” he said. “I had the discipline to learn my lines, to do my work; I was thinking about professionalism at the age of 8. It was casual, but because there was such commitment on her part — because she clearly cared so much — you just wanted to get to her level. You wanted to give as much of yourself as she was giving of herself.

“That professionalism is something that I am blown away by even now, 20 years later. I think that it changes you, growing up. That’s why this program is so good at doing what it does. It teaches acting, yes, and musical theater, and dance, but more than that it teaches responsibility. And that’s true whether you’re going to be an actor or something else entirely.”

Each child is treated as an individual, with his or her own talents, skills, interests, and abilities, he said; “and also we learned to put that individuality together. Together you make ensembles better than their parts.”

Mr. Aisenberg started working professionally when he was 8. “I was in commercials at first, and then I slowly started getting bigger parts,” he said. In 2007, he went to Louisiana to film “The Longshots.” “That was mind-blowing,” he said. “I was there for four months. I didn’t work on the movies every day, but I had to go to the set every day for school, because I was a minor, so I would sit there in video village and watch people work. It was a $60 million dollar movie. I could have sat there all day watching.

“That’s when I realized that I love acting, but this behind-the-scenes thing? I love it just as much. Whether I am behind the scenes or in front of the camera, I just want to be in that world.”

Back at home, Mr. Aisenberg went to high school at Bergen Tech, and then he went to NYU’s Tisch School. “In my freshman year I started a production company, Deverge, and I still have it today,” he said. “I started it with a friend, as a lark. We were making a documentary about a group called Improv Everywhere, and we showed it at South By Southwest.” He’s maintained a close relationship with the improv company, and Deverge now has six full-time employees. (Did I mention that Mr. Aisenberg is 24 years old? I believe I did, but let’s repeat that here. He’s 24…)

“I like producing because it uses the same side of the brain as acting, but in a different way, and it keeps me active,” he said. “I like having someplace to go every morning, instead of living like a full-time actor, working out, going to the gym… I like the responsibility. I learned it when I was 5, from Deb. People are waiting on me to do my thing, and I like that pressure.”

He also is an actor, of course. “‘Orange’ came around almost three years ago,” he said. “I was supposed to do one episode.” Now he’s going into the fifth season.

“It is a crazy roller coaster,” he said. “It is the best job in the world, to be on a show that is so well-regarded and so well-written. It is a show that is changing the dialogue in society. It’s the first thing I’ve ever worked on where I don’t even have to say anything. People just recognize me.

“And it’s changing the dialogue about prison reform, about transgender rights, about women’s rights. And I don’t have to explain it to people because they get it.

“Season 3 has a wonderful character arc about converting to Judaism,” he added. “It was beautifully done. Black Cindy, played by Adrianne C. Moore, comes to terms with religion. First she wants to convert because she wants the kosher meals, and then she slowly starts understanding what the religion is about. By the end, when she converts, she cries. It is so poignant and beautiful.”

For him, he added, being Jewish means being part of a community. He went to public school in Englewood Cliffs until it ended, in eighth grade, and “there were maybe 30 or 40 kids in my grade, and only two of us were Jewish. That made me feel part of a community; it separated me in a way that I felt proud of. Maybe 80 percent of the other kids were Italian, and I was Jewish, and going to the JCC on Sundays solidified that. It made me proud to be part of this group of people who had this connection to each other.”

Because of his ties to the JCC, and his deep affection for Deb Roberts — “basically I’m doing this radio play because Deb asked me to, and I will do anything she asks me to do,” he said — he’ll be at the JCC on Sunday evening.

So will Ms. Roberts, who has been acting most of her life, but has never acted at the JCC, despite her decades of work there. “I play a bunch of different parts,” Ms. Roberts said. “The best friend, a spooky waiter, a French maitre d’ — which is really fun! — and a stage manager. It is just fun to do this!

“It’s terribly exciting,” she added. “It’s thrilling to be on this stage. It’s almost like an aphrodisiac. It’s lovely fun, and I’m enjoying it tremendously.

Who: Alan Aisenberg stars in

What: “The Haunting Hour,” a 1945 radio play, cushioned by songs and jingles

Where: At the Kaplen JCC on the Palisades, 411 E. Clinton Ave., Tenafly

What else: It’s a fundraiser for the Palisades Players; there’s also a VIP
reception, as well as an online auction.