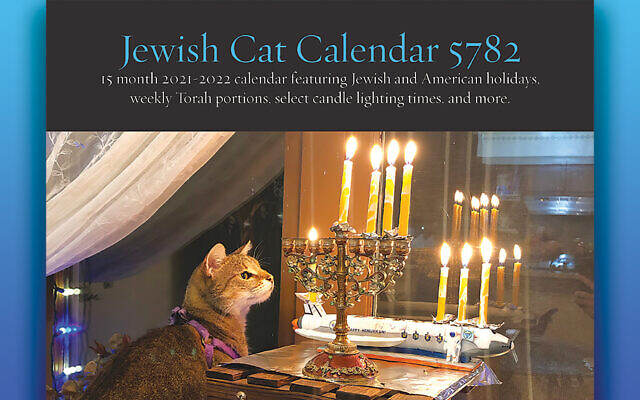 Juniper, posing on the cover of this year’s Jewish cat calender, also is the November calendar cat. (Analemma McKee-Schwenke)

On Saturday night, I was informed that I was in violation of Facebook’s policy against trading in live animals on the site.

Let me back up.

Two years ago, inspired by a friend’s picture of her cat posing on an open Talmud, and ever mindful of my need for a Jewish wall calendar to ensure that the proper D’var Torah column runs in this paper each week, I created a Jewish Cat Calendar, featuring pictures of cats engaging with Jewish texts or otherwise acting demonstrably Jewish. The calendar proved a popular success; this year I printed 1,000 copies.

Besides selling it through Amazon and my own Ben Yehuda Press website, I make it available on Facebook, because why not.

Or at least I did, until I got the notice on Saturday night that the Jewish Cat Calendar violated the Facebook policy.

Of course, when you deal with faceless entities like Facebook, which outsource their moderation decisions to either underpaid contractors or algorithms of dubious validity, mistakes are bound to happen. And my worst-case scenario — not being able to sell a calendar on a Facebook market, where, as it happens, nobody has been buying — is not at all comparable to the real-world worst-case scenarios of Facebook’s general policy of being as cheap as possible when it comes to moderation. That worst-case scenario would be what happened in Myanmar, where Facebook’s lax moderation enabled government military personnel to incite massacres against the country’s Muslim Rohingya minority.

And besides: There is a button I could (and did) press to seek a manual review.

But it got me thinking: Was my own Artificial Intelligence smarter than Facebook’s?

By “my” Artificial Intelligence, I mean the language model that an Israeli company, AI21 Labs, makes available to the public at ai21.com/studio. The model is very similar to the better known GPT-3 program made available by the American-based OpenAI company.

In a way, Artificial Intelligence is a misnomer. These are artificial writers, with the knowledge acquired from imbibing millions of pages from the Internet. You feed the program a prompt, and the program continues with a reasonable guess of what someone — a person who has read the Internet but has no common sense — might guess would come next.

A lot depends on the prompt.

The programs can be used to create jokes.

Here’s one my son Joey coaxed from GPT-3.

He prompted it: “There’s a traditional Jewish joke that goes something like this:”

And the computer responded with a joke that, based on Joey’s Google research, is in fact not at all traditional, but original and created by computer:

“Why did God create Jews? Because He needed somebody to call Him names.”

Then Joey gave a larger prompt:

There’s a traditional Jewish joke that goes something like this: “A Christian, a Buddhist, and a Jew”

He ran it a few times. Here are a couple of the results:

Again: These are jokes created by a computer program.

I figured this would work as a prompt: “This is a yes or no question: Does a listing for a ‘Jewish Cats Calendar’ imply the sale of live animals?”

Well, it turns out that prompting AI is an art, one that I have not yet mastered. My prompt did not generate the yes-or-no answer I was hoping for.

Instead, AI21.com wrote a news story about a Jewish cat calendar, created by a “Florida-based seller, who bills herself as ‘The Jewish Cats Lady,’ ” which becomes the target of animal rights activists who launch a petition on Change.org calling on Amazon to stop selling the calendar.

“As of midday Wednesday, the petition had collected 3,642 signatures, with a goal of 5,000,” the AI wrote, plausibly if fictitiously.

The artificial text continues: “‘This calendar promotes and supports animal cruelty,’ the petition reads. ‘Animals are not ours to use and abuse in any way for our own selfish needs. Please stop promoting and selling this calendar or any other product that involves animals being used for human entertainment.’”

The AI clearly captured the rhythm and format of a Jewish newspaper story.

“‘Anyone who supports Jewish Cats Calendar is supporting animal abuse,’ said Rachel Hirschfeld, a Florida resident who launched the petition.

“‘This calendar is just another example of how the Jewish community is not sensitive to animal suffering,’ she said.”

Remember: This petition, and this quote, is fictional, invented by a computer program.

And the lack of common sense endemic to this generation of AI programs was evident a few paragraphs later in the story, when it described the contents of the calendar:

“Most of the photos are of kittens. In June, for a page titled “Roosters,” [the calendar’s creator] features a photo of two baby chicks.

But the AI recovered from that snafu, with another fictional quote from the (presumably) fictional animal rights activist: “It’s a shame that Amazon is carrying such a product,” said Hirschfeld. “We are not asking for a ban on calendars, we are asking that they stop selling Jewish Cats Calendar.”

In a perfect final touch, the AI credited the story to JewishJournal.com, reprinting the standard footer of articles in the Los Angeles Jewish paper’s website.

As of this writing, I have not yet heard back from Facebook.

I can, however, assure you that the 5782 Jewish Cats Calendar includes no photos of puppies or baby chicks, and involved minimal cruelty to animals.