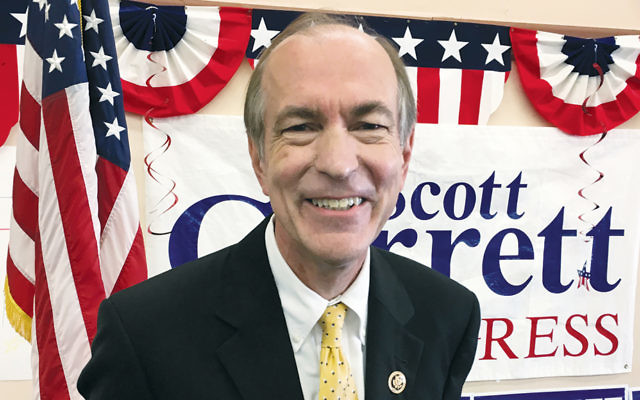 Scott Garrett at his campaign headquarters in Hackensack. (Larry Yudelson)

Scott Garrett is the Republican who has represented New Jersey’s Fifth Congressional District since 2003.

Until 2012, Mr. Garrett was of merely academic interest to most of our readers in our catchment area, because the Fifth District was largely rural, composed of mainly Sussex and Warren counties. But once the district’s boundaries were redefined — as they can be every 10 years — it came to include much of Bergen County. Mr. Garrett now represents many if not most of our readers. As a congressman, he of course is up for re-election this year, although it is perhaps safe to say that the outsize and extraordinary presidential contest has sucked much of the attention from down-ticket races.

But Mr. Garrett is running a close race; his challenger, Josh Gottheimer, is mounting a serious campaign against him, and the polls show no daylight between them.

With that in mind, meet Mr. Garrett.

In a way, the redistricting took Mr. Garrett, who has lived in Sussex County for most of his adult life, back to his roots. He was born in Englewood Hospital in 1959, to a mother — Sue, who now is 93 and lives in Florida — whose own family came from Bergen County, and a father — Ernie, dead about a dozen years — who came from Weehawken, just one county south. “When I was a little kid, we lived in a house in Closter that my dad built,” Mr. Garrett said. “My mom would tell the story of how he laid down cinder blocks, piece by piece, and they painted it themselves. It came down just a few years ago, in one of the big storms.” His grandmother — they called her Nana — lived next door.

Soon, the family moved to Sussex County. Ernie Garrett worked in Manhattan, “for a company that was then called U.S. Rubber and then became Uniroyal.”

And yes, he confirmed, he is a lifelong Republican.

Mr. Garrett, ever the Jersey boy, graduated from Montclair State University and then went to Rutgers to study law. He practiced law — mainly “general practice and personal injury, on the defense side” for about two decades, becoming involved in local politics as he worked his way up. For 12 years, starting in 1990, he sat in the state legislature. “I ran an uphill campaign — there were five people in the race and I was the long-shot candidate, but I outworked them and won that race,” he said. “I surprised everybody.”

Mr. Garrett sits on the House Financial Services Committee, and he now chairs the financial services subcommittee on capital market and government-sponsored enterprises.

Mr. Garrett is a born-again Christian. “My testimony is that I grew up in a Christian household but became born again sometime during my married years,” he said. “I grew up mainline Protestant — the churches we went to were Baptist and Presbyterian — and now we go to an evangelical unaffiliated church.” How did that happen? How do you become born again? “Maryellen and I were married, and we had kids” — two daughters, both now adults — “and then we began to have all these questions, the questions that you have when you have kids. And so you begin to attend different churches, and find the one you fit with the best. That’s how it works.”

Scott and Maryellen Garrett homeschooled their daughters; they could not find a Christian school that taught their values well enough, he has said.

Mr. Garrett is a deeply committed Christian. He studies scripture every day if he possibly can, both by himself and in small groups.

Does his religion affect his work in Congress? “Religion affects all aspects of your life,” he said. “Of course, as a representative, I represent all the people of my district as well.”

Mr. Garrett’s positions, particularly on social issues, are deeply conservative. Recently, that has caused controversy; he has lost a great deal of support over his staunch opposition to same-sex marriage, and he has been charged with bias against the lesbian, gay, bisexual, and transgender community. Those charges have led to decreased funding from many major financial institutions, which count LGBT people among their employees.

He is charged with hating gays, he said; the accusations are that “I hate this group or that group. But I don’t hate anyone. We are taught to love people, wherever they are.”

Mr. Garrett’s record also shows him to be unswervingly anti-abortion; he has a zero percent rating from the Naral, a national pro-choice group, and a 100 percent rating from its ideological opposite, the National Right to Life Committee. He is also a founding member of the Liberty Caucus, a right-wing, libertarian-leaning congressional caucus that has philosophical ties to the Tea Party movement.

Mr. Garrett’s support for the Republican party is unswerving. “I have been very active supporting the party, and supporting other Republican candidates financially as well,” he said.

What about the head of the Republican ticket?

It’s important to be clear here. Mr. Garrett was speaking on Thursday afternoon, 24 hours before the first video of his party’s candidate for president, Donald Trump, showed the candidate using vulgar language and seemingly admitting to committing sexual abuses, just because, as he told us, he could. It was before Mr. Trump’s subsequent meltdown, and before the contentious Sunday-night debate, but already Mr. Trump had used enough vulgar language and insulted enough people to make the question a logical one to ask of a devoutly Christian politician.

“Do you support Donald Trump?” The obvious follow-up question was asked.

“There are things that trouble me that both candidates have said,” he continued. “I don’t think you can expect anyone to agree with everything anyone says.”

On Saturday, after the video was released and the fallout had begun, Mr. Garrett released a statement. “Donald Trump’s comments are inexcusable,” he wrote. “I am appalled that he would brag about violating a woman’s physical boundaries… I believe that Mike Pence would be the best nominee for the Republican Party to defeat Hillary Clinton.”

Mr. Garrett is a strong supporter of Israel. “I’ve been there several times, and I’ve enjoyed every one of my visits,” he said. “My wife and I have toured quite a bit, and I have met Netanyahu. I visited Sdorot” — where missiles from over the border in Gaza terrorized residents and upended their lives — “and I’ve been up to the Golan. It seems that every time I have visited, I have gone over there during a time of troubles, attacks on buses, bombings, the intifada. Just the last time, there were knife attacks in the streets.” That was last summer, when a spate of occasionally murderous stabbings unnerved Israelis and visitors.

“We were there when Joseph’s tomb was burned.” The tomb, in Nablus, a town in the West Bank, is a flash point between Jews and Palestinians, and for long periods Jews have not been allowed to worship there. In 2015, a group of Palestinians tried to burn it down and caused damage; that was not the first attempt at arson there.

Mr. Garrett concluded with a paean to bipartisanship, which, he said, still exists, even though no one talks about it.

“Why don’t we hear about that? Because the mainstream press covers just two or three big issues at a time, and there is a lot of partisanship on those issues. But that’s only about five or six percent of what we do.

“I think that my committee is pretty important, but you won’t open the Bergen Record or the Star-Ledger or your paper and see anything about bills we pass. But if there was, it would have to say that it was passed with bipartisan support.

“I know that what I do is not sexy, but when I try to relate it to people, I say, do you want to get a car loan, a mortgage, start a small business? My committee affects whether that is hard or easy to do. But when I start talking about it in any detail, their eyes glaze over. I can talk about Dodd Frank — but it’s not sexy. So when you go on talk shows and try to say that you’re getting something done and passing bills and working together, it’s like dog bites man, not man bites dog.