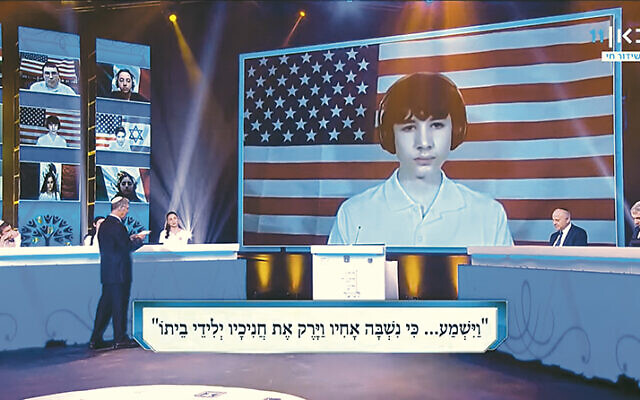 Yehuda Zinberg of Teaneck ponders a question in the 2020 International Bible Quiz for Youth.

Usually, the diaspora teens who are among the final 16 contestants compete with their Israeli counterparts onstage at the Jerusalem Theater on the morning of Israel Independence Day.

This year — the year of the pandemic — they participated via video in the wee hours of the morning from their home communities in the United States, England, Argentina, Panama, South Africa, and Mexico.

The normally packed theater was empty aside from the Israeli contestants, emcee, judges, and translators onstage, as well as the technical crew who brought the production to viewers’ screens worldwide.

But there was another unusual aspect this year. Two of the 12 diaspora contestants were from Teaneck: Yehuda Zinberg, a freshman at the Idea School in Tenafly; and Ezriel Vinar, a junior at the Torah Academy of Bergen County. They each had won a free ticket to Israel for the international round by virtue of their performance at the USA Bible Quiz last May.

As a Yavneh Academy eighth-grader, Yehuda placed first in the nationals in the eighth-grade Hebrew-language division. He followed in the footsteps of his father, David Zinberg, who came in second nationally as an eighth-grader at the Yeshivah of Flatbush in 1979 and participated in the international round in Israel the following April.

Ezriel placed second in the high-school Hebrew division last year. Had he been able to take advantage of the free trip — which normally includes two weeks of guided touring courtesy of the Jewish Agency’s Department for Jewish Zionist Education — he would have been able to visit his older brother, Nathanael, who is in Israel for his gap year. Nathanael placed sixth in last year’s International Bible Quiz for Youth.

Yehuda and Ezriel were among more than 70 teens from 39 countries who vied for the 16 finalist slots in the 57th International Bible Quiz for Youth. The famously difficult contest has been held on Yom Ha’Atzmaut almost every year since 1958. 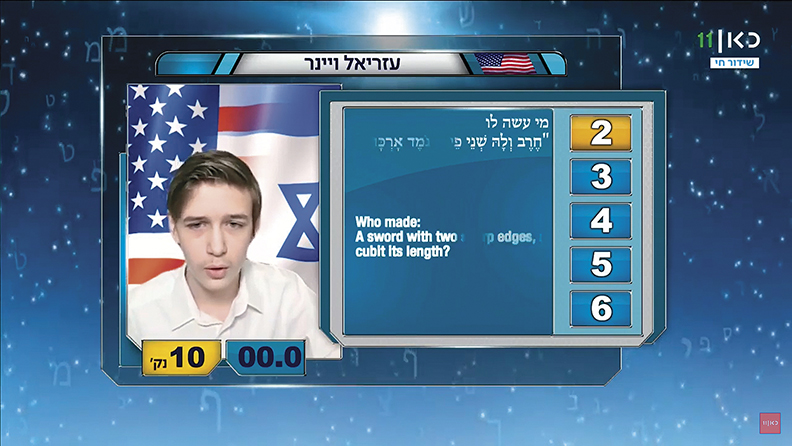 Ezriel Vinar of Teaneck answers a question in the bible quiz.

Contestants study a syllabus of 415 chapters of the 929 chapters of the Jewish biblical canon. They are asked to match quotations with the person who said them or about whom they were said, identify the book from which a passage is quoted and its narrative context, pinpoint where an event occurred, and perform other feats of textual familiarity.

The first-place winner was Ruth Cohen, an 11th grader from Gedera, Israel.

Yehuda said that while the pandemic kept him from going to Israel, it also gave him more time to go over the texts. “I go to the Idea School, a new project-based learning Jewish high school based in the JCC in Tenafly,” he said. “We have class virtually, but there is a lot less total class time and there is also no time spent getting to and from school, so I would say that the coronavirus has made it easier to study in that regard.”

By the time his face appeared on screen at 11 a.m. Israel time (4 a.m. Eastern time) on April 29, Yehuda — and his parents, David and Yael — had been up for many hours, getting ready for the contest in consultation with the crew in Jerusalem.

“There was a lot of preparation of the room I was filming in — getting a good camera angle, background, lighting, etc. — in addition to making sure that my computer, headphones, and other tech that I needed was working properly,” Yehuda said.

“In addition, we had multiple rehearsals where we practiced how we would answer questions on live TV, among other things. I chose to not sleep the night before, because there was a rehearsal that morning and more opportunities to study the rest of the day.”

TABC students competing in the USA Bible Quiz were coached via video conference on Sundays by Rabbi Neil Winkler of Jerusalem. For 30 years, until he and his wife made aliyah in 2014, Rabbi Winkler, the founding rabbi of the Young Israel of Fort Lee, prepared contestants at the Moriah School in Englewood. Ezriel, son of Dov and Michal Vinar, continued studying with Rabbi Winkler before the international round.

Rabbi Winkler watched live from home as Ezriel ascended to fifth place in the international contest. This was the third time in four years that one of his protégés has placed in the top eight.

“I am so proud of what Ezriel accomplished today,” he said. “I go through all these emotions whenever my students compete. I’m so nervous for them when they make it on to the stage as one of the final 16. When they ask them a question, my heart pounds. But when it is over, I am filled with such amazement over what they have achieved.”

Rabbi Winkler says that people cannot imagine how many hours of study and months of effort these yeshiva high school students choose to pour into preparing for the quiz while keeping up with their regular dual curriculum at school.

“When they reach the top echelon of the finalists it means that they have competed with the champions of dozens of countries and are in the top 16 of the entire world! We must look on with admiration for what they have achieved.”

All three TABC students who studied with Rabbi Winkler for the national round have qualified to compete on May 10. This contest, too, will be different this year. Instead of gathering in New York as usual, contestants will take the timed written portion of the quiz at home, answering 70 questions in less than an hour. Connected via video, the 200 national finalists then will be treated to virtual activities including a trivia contest.

USA Bible Quiz coordinator Rabbi Dovi Nadel explained that the top scorers on the written quiz will be invited to participate in a final round on a date to be determined in August.

“It remains to be seen whether this will take place in person or online depending on the current situation,” Rabbi Nadel said. “Those who progress to this stage will receive more material to study over the summer.”