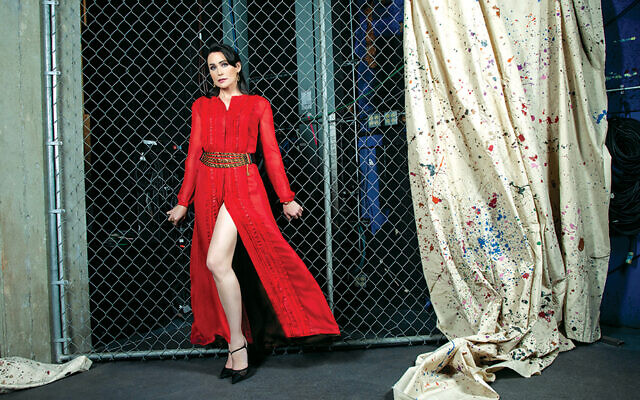 Rena Sofer was a few minutes late for the Zoom interview.

Her teenage daughter, Avalon, unexpectedly asked her mom to drive her and a friend to Universal Studios. That required last-minute technological rejiggering, from home computer to car Bluetooth, but family requests are not to be denied.

This family-first philosophy has guided Ms. Sofer’s recent career. A few years ago, it seemed impossible to turn on the TV and not see her: on Seinfeld, on 24, on Ed, on Melrose Place, on Coupling, on NCIS. The list is long and varied.

But she’s spent the last eight years almost exclusively playing the generally evil Quinn Fuller on The Bold and Beautiful, in large measure to be available to also play chauffeur.

With Avalon and friend safely ensconced in the back seat, Ms. Sofer, 52, explains, “My choice of staying on the show and not auditioning [for other parts] is because I’m raising my youngest daughter. My goal with my husband” — Sanford Bookstaver — “was that she would be raised by her parents and not by a nanny.

“My daughter is a really good student, and she loves her life and her friends and her world. That doesn’t allow me to just take a job somewhere and say, ‘Hey, you’re going to home school in Vancouver while I take this job.’

“So my goal while she is growing up is to be a full-time stay-at-home mom as much as possible. So that’s why being on the show has been so great and also why I really don’t audition for other things at this time, because I need to be here for her.”

Working soaps can be a grind, with little room for do-overs. Unlike weekly nighttime shows, “you don’t really have time to develop a scene,” Ms. Sofer said. “You kind of have to give it what you can, because you only have one shot to do it; on a night-time show you can have take after take to really work with the actors.”

Certainly she knows of what she speaks. Ms. Sofer is an experienced soaper. Early in her career, before B&B, she spent three years on Loving and three more as Louis Cerullo on General Hospital, a role that earned her an Emmy.

Ironically, the craziness, backstabbing, and hanky-panky of daytime serials is a far cry from the world in which she was brought up, as the daughter of a New Jersey rabbi.

Her parents divorced and she lived mostly with her father, Martin, a veteran wounded during service in the Israeli War of Independence. An Orthodox rabbi, he served mostly Conservative congregations, including the Beth Samuel Jewish Center in Ambridge, Mass.

Being the rabbi’s daughter was not always easy, Ms. Sofer said. “You can never get out of going to temple. That was always tough. And I always had to sit in the front row, so if during the High Holidays my brother and I wanted to run off to my father’s office, my father would make it clear to the entire congregation that we were leaving by the way he looked at us or the things he said.”

It was less of a burden when they family was based in Ambridge. “We were in a small town that wasn’t Jewish, so it wasn’t like we had to be pillars of the community. But, yeah, being the daughter of an Orthodox rabbi was more difficult because my parents were divorced and my mother was Jewish by birth only.”

Show business was “never my ambition,” Ms. Sofer continued. “I was discovered on the streets of Greenwich Village when I was 15.” She was meeting a friend she’d made on a teen trip to Israel when a talent scout spotted her.

Rabbi Sofer was supportive. “My father thought it was something interesting, and that it would build my confidence,” she said.

She attributes her lack of confidence to the dichotomy of her upbringing. She moved between two very different households, with two very different sets of values, she said. “My mother was very unreligious. My father was very religious. So when I would see my mother the way I was raised by her was polar opposite of the way my father raised me. So when you go to extremely Orthodox yeshivas like Lubavitch yeshivas, it doesn’t really allow you to fit in.”

I asked if it became more difficult to keep her Jewish values as she became more successful. “Those were my father’s values,” she answered. “When I became an adult, I created my own set of values. I’ve always been Jewish. I always go to temple on the High Holidays — to this day. I raised my children Jewish. My first daughter, Rosabel — her father” — actor Wally Kurth — “wasn’t Jewish, but she was raised completely Jewish and she is probably more religious than I am at this point.”

That wasn’t exactly what I meant. I was thinking more about the temptations that seem to be ever present around celebrities. “Not every actor gets into drugs and alcohol,” she said. “It was very easy for me not to get into that. I don’t have the ability to drink heavily and do drugs. My body actually doesn’t like it at all.

“My father raised me right.”