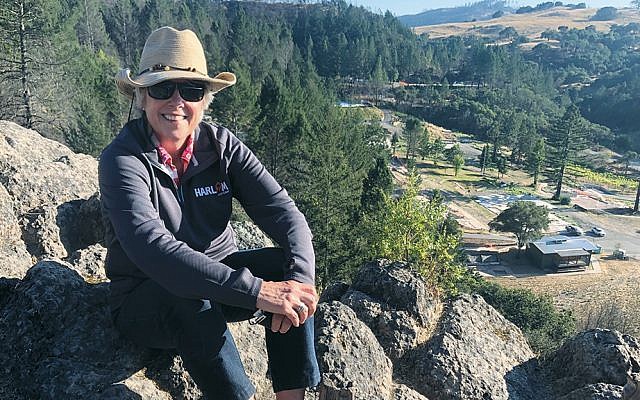 Miriam Chilton, the new COO at the Kaplen JCC on the Palisades, pauses during a hike at the Union for Reform Judaism’s Camp Newman.

The platonic ideal of a JCC places it at the center of a network, connecting everything, connected with everything, electric and buzzing with constantly replenishing energy running up and down and across and through it.

That’s the ideal that Miriam Chilton envisions as she plans to become the new COO at the Kaplen JCC on the Palisades in Tenafly next month.

She’s been a Jewish professional for some time; she’s worked for the Reform movement, to which she belongs and which she loves, but “I was a couple of steps removed from the delivery of services,” she said. “I will get to have a more direct relationship with the members of the center; it will be a more reciprocal relationship, where I’ll more easily be able to see the impact of what I’m doing.” That way, she said, “we can see if there is any change needed to ensure that we are building a more connected and empathetic kind of place; a place of meaning for those who come to it.”

Ms. Chilton, who lives in Montclair, is pure Jersey, and deeply Jewish. She was born in Lawrenceville, her family belonged to the local Conservative synagogue, she went to what was then called the Abrams Hebrew Academy, and she was active in USY. And then she went to Ithaca College, in upstate New York, “and I sort of drifted” away from that Jewish world, she said. “My world view at the time, or so I thought, was that I wanted my experience to be broader than what was familiar to me.” In what could be argued was the application of her Jewish principles, “I became very involved in a number of social movements — in the feminist movement, in the environmental movement, in the anti-nuclear movement.”

When she graduated from college in 1983, “I thought that I wanted to become an attorney, so I became a paralegal — and I realized that I didn’t want to be a lawyer,” she said. Instead, she parlayed an interest in computers and business into an MBA and a master’s degree in science and information systems, and from there went on to “a very successful career across banking and print media,” she said.

But then, “in midcareer, I realized that although this was a very good career, I wasn’t necessarily achieving the goals I had set for myself in life.” The memory of the social-justice work she’d done in college manifested itself, no doubt helped along by the fact that “I’d gotten married, had children, and gotten involved in my local synagogue, Ner Tamid in Bloomfield.

Her husband, Joel Dorow, has a day job — he works at Sanofi, in Bridgewater, and he’s also “a very accomplished musician,” Ms. Chilton said. “He plays harmonica in multiple bands. His most serious band is Lily Vakili. They play original songs by a songwriter” — that’s the eponymous Ms. Vakili — “who really speaks to the issues of our day.” Ms. Chilton and Mr. Dorow have two children, Shaina and Sam.

“So I reconnected with the Jewish community in meaningful ways, and I learned about the role that congregations have not only in spiritual matters but in community matters as well.

“My ability to influence and impact change in the world ultimately was driven from that perspective,” she said. In other words, everything — her childhood, her education, her passions, and her career — came together in a new way, because she was willing to take risks, make moves that might not seem intuitive to onlookers, and remember what it was that drove her. 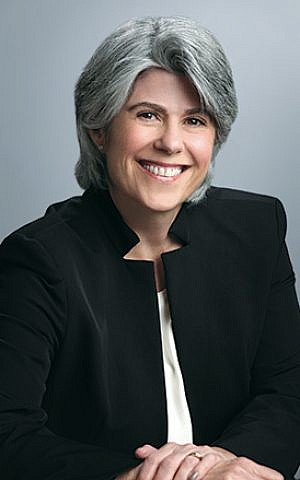 Miriam Chilton lives in Montclair with her husband and two children.

First, she had to figure out how to do it. That’s where the network she’d already developed proved its value to her. “I had a very efficient lunch meeting with a friend and colleague who knew exactly how to ask the right questions,” Ms. Chilton said. “I took a relatively entry-level position at the URJ” — that’s the Union for Reform Judaism, the Reform movement’s central organization — “as a business manager in the camping system. And then, over the years” — 15 of them — “I was promoted.”

Eventually she earned the delightful title “vice president of youth.” “I am responsible for our 17 resident camps, our education and travel programs in Israel — we have an accredited high school there, the URJ Heller High — and our service learning programs.

“It’s been a beautiful journey,” she said.

But now, 15 years later, she’d like to travel a little less — you can’t run a travel program without being on the road yourself — and changes in the URJ made her feel that it was a logical time to move on. “I wanted the opportunity to take all that I have learned and be in a more direct relationship with the people I’m doing the work for,” she said.

Working in the Jewish world but outside the Reform movement will be new for Ms. Chilton, but it’s a challenge she welcomes. “If we really want to have an impact in the world, as Jews, we have to understand how to do that work across denominations,” she said. “It is critical to try.”

At the JCC, as COO, “I will oversee all the operations of the programs and services that are delivered there,” she said. “The JCC is the crossroads of the community. It’s where you bring your children for after-school activities or where you drop off your elderly parents.

“It is a Jewish institution, both in the community it serves and the content it delivers. Its decisions are fundamentally driven by Judaism, and the way in which Judaism sees its role in making the world a little more welcoming.”

That’s true of all JCCs, she said, but it’s particularly true of this one. “The reputation of the JCC is incredibly strong well beyond its walls,” she said. “Ultimately, being a community asset like the JCC is all about the people, the leadership, and the board. They all have reputations that reach far beyond its walls.”

Jordan Shenker is the JCC’s CEO. He hired Ms. Chilton, and he thinks she fits perfectly into the JCC’s ongoing plans.

The institution recently completed a five-year strategic plan, and it’s now at the end of the first year of that plan. It focuses on “innovation, outreach and engagement,” Mr. Shenker said.

“Engagement in general, but Jewish engagement specifically. So you want an infrastructure and management team — conveniently, Miriam has a background in business. And outreach and engagement — that’s what she did at the URJ.”

It’s unusual for JCCs to hire high-level executives from outside the JCC world, he said; a background in a for-profit business, or even in other nonprofits, even Jewish nonprofits, often aren’t able to give a new hire the ability to understand, fit into, and work with the specifics of what Mr. Shenker called “a very complicated business to run.” So he was surprised when two colleagues of his, “who I trust, both called me and said ‘You need to talk to her.’ So I called her, and in 10 minutes I knew I had to meet her, and an hour into the meeting I knew I had to bring her in for an interview.”

As a result of that interview, Ms. Chilton will start her work at the JCC next month.

Needs change, Mr. Shenker said. “Miriam is not necessarily who we needed four years ago, when I first came to the JCC.” Now she is. “It’s being at the right place at the right time,” he said.