Simchat Torah closes out the High Holiday season with circles of joyous dancing around the scrolls of the Five Books of Moses. It’s the day when the yearly cycle of readings ends and the new one begins.

Many small or remote congregations need a few extra hands to put the simcha — the joy — into Simchat Torah.

That’s why, for more than 40 years, Yeshiva University students have participated in “Torah Tours,” spending two days in small synagogues as close as West Orange and as far away as Montreal and Palo Alto to assure that Simchat Torah will be a true “yom tov” — literally a “good day,” or religious holiday — while at the same time broadening their Jewish cultural horizons.

This year, more than 200 Torah Tours volunteers from the centrist Orthodox university visited 48 communities across North America; 81 young men and women from New Jersey were among them.

“We are so proud of our students who spent their yom tov bringing their energy, spirit and Torah to Jewish communities all over the United States and Canada,” said Naomi Kohl, who is the director of student life on YU’s midtown Manhattan Beren Campus and the coordinator of the Torah Tours missions.

“We have heard back from many of the communities about how thrilled they were with our students and how they went above and beyond in their roles,” she continued. “Our students have also expressed their appreciation for the amazing opportunity they had to share their knowledge and spirit, and for the wonderful hospitality they received as well.”

Yehuda Avner of Teaneck, a 22-year-old YU junior, was part of a group that went to Beth Israel Synagogue in Halifax, Nova Scotia. He spent a good deal of time beforehand preparing to lead services and deliver a few short talks to Haligonians, people he’d never met. (In case you’re wondering, yes, Haligonian is a word. It means someone or something having to do with Halifax, both the one in West Yorkshire, England, and the one in Nova Scotia, Canada.)

“Honestly, the mental preparation for this trip was hardest for me, since I have never been away from my family and my hometown for an entire yom tov,” Mr. Avner said. He wasn’t sure if the experience would be worth the sacrifice of missing the familiar warmth of his own home and shul.

“At the end of our last day in Halifax, my teammates and I held a panel for the congregants of the shul,” he said. “The main topic of discussion was whether any of us would pick up and leave the comforts of the large Jewish communities in which we live and move to a smaller, less religious Jewish community such as Halifax.

“It was very interesting to hear the perspective of the Haligonians, most of whom are not Sabbath observers, yet drive to shul for minyan on Shabbos because of their deep connection to Judaism. They provided an interesting insight that one can be more religious in a smaller community because of the need to constantly be involved in the Jewish community, whereas in a larger community, one can get lost in the crowd without a significant role in the community, and robotically perform the religious rituals without putting in much thought.

“This was memorable because it made me think about my own future and where I would want to live one day, which is a question I continue to ask myself.”

The takeaway message for Mr. Avner was a recognition that “not every town has a vibrant, ‘in-town’ type of Jewish community similar to the one in which I grew up, in Teaneck, with too many shuls for me to count; and that there is life outside the ‘bubble’ where I was raised. This realization will help me in my future in Jewish education because it enabled me to better understand where people come from, since I was privileged to experience a taste of it.” 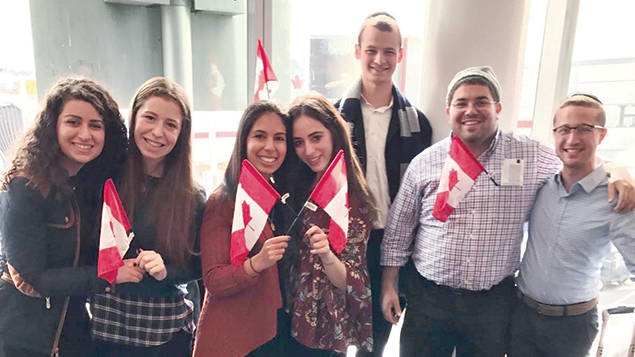 From left, Rachel Gozland of Riverdale, Malya Glatter of Teaneck, Esther Simchi of Fair Lawn, Leora Lasson of Baltimore, Jack Ganchrow of Teaneck, Avi Sebbag of Passaic, and David Lauer of Woodmere were the Torah Tours team in Toronto.

Michael Hirt of Bergenfield, a 20-year-old sophomore, participated in Torah Tours at the Westville Synagogue in New Haven, Connecticut. He prepared a lesson on what ideas you can take from Simchat Torah and bring to the rest of the year. He also explained the songs traditionally chosen to accompany the seven circuits danced around the Torah scrolls.

“One memorable moment I had in New Haven was on the first night, when we had a meal with Rabbi Fred Hyman,” Mr. Hirt said. “After the meal, the rabbi asked the Torah Tour participants and a couple of community members at the meal to stay at his house for some yom tov singing.

“We ended up singing for around an hour and a half. This experience was a great way to begin the yom tov as it really initiated a bond which we and the community continued.”

He reflected that with only about 50 people present, an onlooker might have expected the simcha in Simchat Torah to be absent. Instead, he said, he saw that the congregation’s unity and spiritual aspirations were more important than its size.

Esther Simchi of Fair Lawn, a 21-year-old senior at YU’s Stern College for Women, went with her group to the Forest Hill community of Toronto, Canada. She and fellow volunteers Jack Ganchrow, Malya Glatter, Rachel Gozland, David Lauer, Leora Lasson, and Avi Sebbag prepared talks for adults as well as educational programs for 3- to 8-year-olds at the Forest Hill Jewish Centre.

“I was given the opportunity to prepare a Torah lesson for the female congregants,” Ms. Simchi said. “This was especially memorable for me, because I was able to enhance the Simchat Torah experience for the women of the community.”

Ms. Simchi said her experience on Torah Tours instilled a feeling of Jewish unity. “Although I had never visited Toronto prior to this trip, my group and I were still able to create a connection with the community that revolved around our mutual love for Torah. As we shared divrei Torah” — words of Torah — “and inspiration with the community, in return they gave us a sense of Torah’s continuity all over the world.”

Yehoshua Szafranski, a sophomore from Teaneck, said he felt a connection to Congregation Beth Israel in Metairie, Louisiana, right away. The shul has come through a difficult period — it suffered severe damage, including the loss of seven Torah scrolls, during Hurricane Katrina, and was flooded again when a water main broke.

The students were so moved by the community’s warmth and hospitality that they bought a cover for the shul’s shtender — its prayer stand. The cloth is embroidered with the Hebrew verse from Psalm 119, “How I love Your Torah/It is my conversation all day.”

“The most meaningful part of my trip was our spirited dancing with Rabbi Gabe and the rest of the congregants in front of the synagogue’s ark,” Mr. Szafranski said. “Plastered upon the ark is a verse from Song of Songs (8:7): ‘Mighty waters can’t quench our love [for You]…’

“Even after being under 10 feet of water — twice! — this community continues to show what it means to serve God and their fellow man with love and joy,” Mr. Szafranski added. “I am forever grateful for this experience.”