From left, Paula Polishuk of Chatham, Emily Gitelman of Marlboro, and Taice Brenner of Fair Lawn are in Long Beach. ()NCSY

Nearly eight years have passed since Hurricane Sandy destroyed James Hodge’s house in Long Beach, on Long Island’s south shore. He recalls sitting terrified on the couch, praying with his parents as water started seeping through the doors and up through the floor during the storm in October 2012.

Since then, Mr. Hodge has suffered several family tragedies, and put all his attention on helping his community as chairman of the Long Beach Martin Luther King Center.

“Maybe because of the hurt and pain I went through, I wanted other people to smile and I forgot about myself,” he said. “I didn’t focus on the house. When you help others sometimes it’s hard to receive help yourself.”

This summer, he finally accepted help from an unexpected place: Teenagers and young adults volunteering with the Orthodox Union’s Project Community 2020.

In addition to planting vegetable gardens to augment a local free lunch program, beautifying the neighborhood, and enhancing the center’s library offerings, the teens have been rebuilding Mr. Hodge’s house in partnership with Habitat for Humanity.

Over the course of the summer and the months to come, about 100 teens from New York and New Jersey are traveling to Nassau County to volunteer for a day or two, and to hear from Mr. Hodge about Black history and culture.

“I’m just sitting back in awe,” Mr. Hodge said. “It’s a miracle from God. I’m grateful the Jewish community has come into this town to help me. The Jewish and African American people have been persecuted like no others, and Martin Luther King Jr. worked with a lot of people from the Jewish community for equality and against injustice.”

The New Jersey participants are joining this PC20 initiative through the Fred and Rose Distenfeld New Jersey NCSY Chesed Missions, a program endowed by Gershon Distenfeld of Bergenfield in memory of his parents. The National Council of Synagogue Youth — NCSY — is the Orthodox Union’s program for teens. 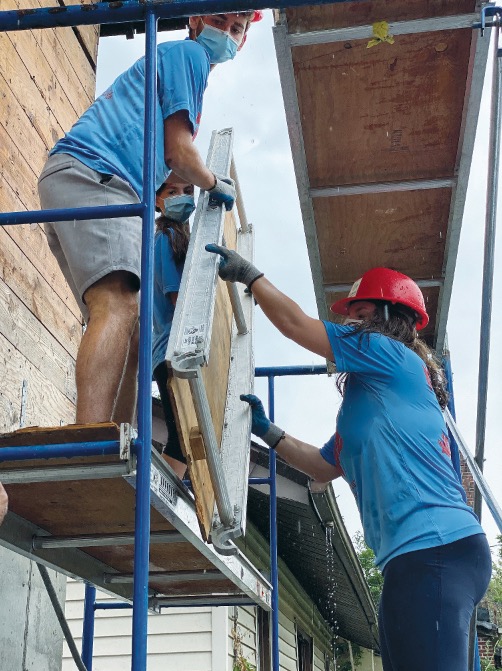 “The impact these last few months have had on our teens is profound,” NCSY’s director of relief mission, Rabbi Ethan Katz of Bergenfield, said. “Observing social unrest over the racial injustice in our country has led many teens to want to give back to their neighbors, not just those in their immediate community. It has empowered them to want to do their part in healing racial divides in our country, and they are excited about this program as it offers them an opportunity to work directly with the Black community.”

Two 2020 Fair Lawn High School graduates, Taice Brenner and Dennis Vink, both 18, are among about a dozen New Jersey volunteers who voluntarily donned masks and gloves to work in the hot sun fixing up Mr. Hodge’s home.

Both are veterans of NCSY chesed missions over the past few years, undertaken in response to natural disasters in Puerto Rico, Nashville, Houston, Buffalo, and New Orleans. (“Chesed” is a Hebrew word that best translates as “kindness.”)

“The reason I do it every time is I meet amazing new people coming together to give chesed, and honestly that’s the whole point,” Dennis said. “The people we help are always surprised, in a good way, not only to see Jewish people but to see people from New Jersey coming to help them.”

He has worked with Habitat for Humanity before. On this project, he and the other volunteers rebuilt the Hodge house from the foundation up. “They take unskilled people and teach us what to do,” he said. “We all get in there and learn and come out with newfound skills, like learning to build a scaffold. The mood is great. We all connect.”

She was motivated to do this “because I wanted to help out a community leader,” Taice said. But she didn’t know Mr. Hodge’s story before arriving to do the hard work of removing ruined gutters and siding.

“Once we were there and met the owner and worked with him and members of the community, and learned their stories, it made the work more important,” she said. “We met other teens and got experience in working in construction.”

She said that some of the communities she’s volunteered in “have never seen Jewish people before, and are amazed that we’re coming to help them. Sometimes people have heard that Jewish people aren’t nice, but then they see us in this environment doing selfless work.

“We don’t do it to make ourselves feel good but to help out a community,” she added. “It helps me grow as a person. Doing all these good deeds makes me understand the power of really making an impact.”

Rabbi Aryeh Wielgus, NCSY’s New Jersey regional director, reassured parents that covid rules are being strictly enforced throughout the mission. “We’re proud of what we are able to do within the guidelines,” he said. “The groups are smaller than usual, no more than 15 at a time, and all staying six feet apart. It’s an added layer of challenge to be standing in 85 degrees hammering away while wearing a mask, but when teens are involved in something meaningful, they are willing to do anything.”

The volunteers come from Jewish schools and public schools. “Part of the beauty of this project is people of different backgrounds getting together for something meaningful,” Rabbi Wielgus said.

“A key component of PC20 is helping our youth appreciate that attending to the needs of others is a core component of Orthodox Judaism, and that there are countless ways of doing so,” the OU’s president, Moishe Bane, said. “PC20, therefore, includes numerous forms of volunteerism, and helping rebuild James Hodge’s home teaches our teens that the importance of providing help extends beyond the immediate Jewish community most familiar to them.”

Mr. Hodge, a religious Christian who sees himself as “a window through which God can show his glory,” said that New York NCSY had worked with him on local service projects run by the community center. Among other things, he established a distribution center for donated food, clothing, shoes, and toys for those in need.

“Rabbi Katz let me know they wanted to personally help me out as a community representative,” he said. “Hearing their stories and them hearing my stories, we learn a lot from each other.”