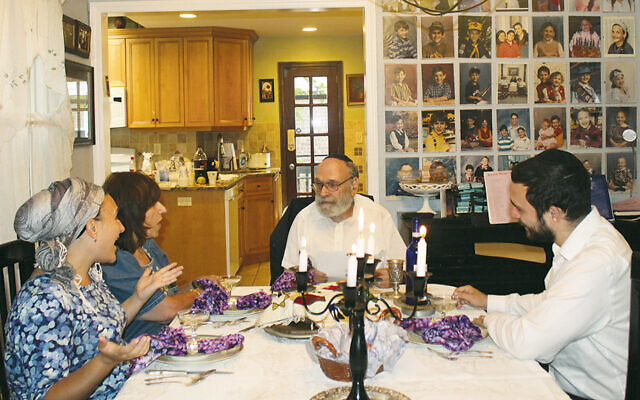 Alvin Reinstein of Teaneck and his son, Sam, made history several years ago as the first father-son pair ever to study simultaneously for rabbinic ordination in the history of Yeshiva University’s Rabbi Isaac Elchanan Theological Seminary.

Now they have a new collaboration.

It’s a book, “Seven Years of My Father’s Shabbos Table,” containing more than 450 pages of questions and answers on the weekly Torah portion — the parsha — that Alvin Reinstein compiled. It started as a labor of love for the bulletin of Congregation Beth Aaron, the Teaneck shul to which he belongs.

“It’s a treasure trove of material,” Sam Reinstein said. “Over the past year I collated the questions and answers and edited them into a book that I self-published.” (It’s available on Amazon for $18.)

During the seven years that Alvin Reinstein produced this material — adding more and more questions and answers on each parsha every year — his family was a direct beneficiary of his efforts. His wife, Esther Lauber, and their children, Sam and Margot, looked forward to lively discussions prompted by the material at Sabbath mealtimes, often together with guests.

“We would go through some of the questions every week at our Shabbos table,” Sam Reinstein said. “Intense parsha questions were the one warning I gave friends, and eventually girlfriends, when they came over.”

Now 30 years old and a husband and father, Sam Reinstein is an actuary at Prudential and has a weekend pulpit as assistant rabbi of Congregation Kol Torah in Brooklyn’s Prospect Heights neighborhood.

Alvin Reinstein explained how it all began.

In 2008, he noticed that the Beth Aaron weekly newsletter contained schedules and announcements, but it rarely had any Torah-related content. “I had the idea to make up some questions about each week’s parsha that could go into the newsletter,” he said.

He got a green light from the shul’s rabbi, Larry Rothwachs, to start providing 10 questions and answers on the weekly parsha culled from sources including the Midrash, the Talmud and mostly classic and medieval commentators, such as Rashi. Positive feedback from fellow members encouraged him to continue.

“The next year I added questions and changed questions, and this went on for seven years,” Alvin Reinstein said. “We ended up with a full cycle of questions for each parsha that covered all of its major topics.”

That translates to about 50 questions (and sometimes as many as a dozen different answers for each question) related to each weekly and holiday Torah portion — plus a few bonus questions on the weekly haftarah.

Here are some examples from the book’s chapter on the portion of Vayeira (Genesis 18-22):

1. The Midrash describes how Hashem caused an unbearable heat to surround Avraham’s tent. Why did He do this (two reasons)?

Answers: The hot air (i) would soothe the wound of Avraham’s circumcision; (ii) would prevent guests from visiting Avraham’s tent, saving him the effort of having to wait on them (Bereishit Raba).

2. What reward is learned from the heat in fulfilling the mitzvah of bikur cholim (visiting the sick)?

Answer: One who visits the sick will be saved from the judgment of Gehenim (Nedarim 40a).

3. According to the Gemara, what were the names of the angels, and what was each of their missions?

4. How do we know that Avraham was a tzadik “who said little but did much”?

Answer: Avraham offered the men “pat-lechem” (a bit of bread) but served an extravagant feast (Rashi).

5. What three miracles does the Midrash describe constantly occurred at Avraham’s tent as long as Sarah was alive?

Answer: (i) The Shechina rested above the tent; (ii) the candles that Sarah lit on Erev Shabbat were never extinguished; (iii) the food in the household was blessed with abundance (Bereishit Raba).

“Putting these questions and answers together gave me really superior knowledge of each parsha, because I had to spend time researching each one,” Alvin Reinstein said. “I hope — and I think, based on feedback I got — that it increased others’ understanding and knowledge of the parsha too.”

Retired from the New York City Housing Authority, Alvin Reinstein began attending classes at RIETS with Sam in 2012. Since receiving his ordination, he has continued attending Torah classes on a regular basis at venues including the Jewish Center of Teaneck.

Though many books have been published exploring the weekly portion, Sam Reinstein felt that his father’s compiled material could provide a uniquely comprehensive source book.

“No parsha book has that many questions and answers,” he said. “I thought it was something worthy of a real publication. When I first started compiling it, I saw it as something nice for my dad. But it’s a valuable resource for people who want to review the parsha because it’s very thorough — not simple stuff, but understandable. I’m using it is a resource for my sermons every Shabbos.”

Due to the abundance of material, the book project took Sam Reinstein quite a long time to compile. He decreased the size of the font and margins as much as possible to keep the tome at less than 500 pages.

“I am somewhat amazed and a little humbled that my son did this,” Alvin Reinstein said.