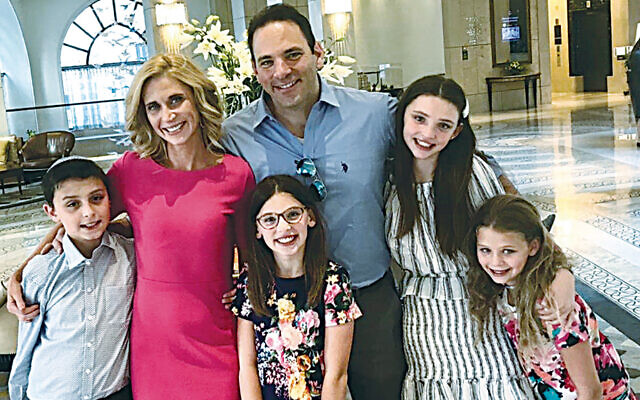 Leora and Dr. Daniel Lowe and their children, Zach, Maya, Talia, and Rose.

Daniel Lowe of Teaneck is quick to disclaim any special status or expertise.

“I’m a urologist,” he says, early and often. “That means that I’m not on the front lines, in an ICU or managing a ventilator. My role has just been doing my best, trying to keep people out of the hospital.”

But he’s a physician, and he sees and hears about what’s going on in local hospitals. “A lot of my friends are on the front lines,” he said.

That’s why he started a petition on change.org, signed by 240 physicians in just a few days, reminding the community of what the stakes are, and of how important it is to stay home, emotionally close to many people but physically close to as few as possible.

He was so impressed with the Rabbinical Council of Bergen County’s original statement, urging strict social distancing, which came out very early and was far-reaching and uncompromising, that “I gave it to my sister’s community in Baltimore, and to my parents’ community in Savannah.” That statement was full of resolve — “But my concern is with how durable that resolve will be,” he said.

“We are faced with a big challenge, with Pesach coming.”

The point of his petition is to beg people to stay home, to help strengthen them as they face what might seem like a quiet, joyless Pesach at home, a quicker seder than usual, and a huge letdown as the calendar just continues, day after featureless day.

But if we practice social distancing, it will end sooner and less terribly.

He felt driven to write the petition because the situation is so dire. “I’m not usually an activist type,” he said. “In fact, this is my first go at social activism since 1987, when I went to Washington for Soviet Jewry.

“But I wanted to write something and get as many of the physicians in our shuls and communities as possible to sign onto it. I wanted to give the community, our friends, our neighborhoods, a physician’s perspective.”

The doctors who signed the petition come from all over the local Jewish world. “I wanted to include as many as possible,” Dr. Lowe said. Because of the way these things work, the request to sign it went first to the doctors he knew, and then to the ones they knew. Almost, pardon the expression, virally.

Dr. Lowe knows about how bad it feels to give up a big seder. “My parents are in Savannah — that’s where I grew up — and I had been looking forward to going home.” This year, though, he cannot. “There will be just the six of us,” his wife, Leora, and their four children. “I have never led a seder in my life, and I’m terrified,” he said. “I was counting on not having to do this for some time. And my wife, the person doing most of the work, is far braver.”

It’s not a big thing to do, and again, he’s a urologist, not someone on the front lines, but this is important, Dr. Lowe repeated, and people tend to listen to doctors.

“A physician is someone who is a trusted advisor,” he said. “I don’t know how to fix air conditioners or manage a portfolio, but I do know health care. I know that my friends are in the line of fire. And I do know that we have to keep that curve as flat as possible.

“I don’t mean to lecture, but I want to make sure that there is no weakening of resolve here. I think that this is one of the most difficult things we can do, in that Pesach is a family holiday, and it’s something that we look forward to all year.

“I have young children, and I think that this has been such a teachable month. I keep reiterating to them that you are saving the life of someone you don’t even know, and there is no greater mitzvah than that.”