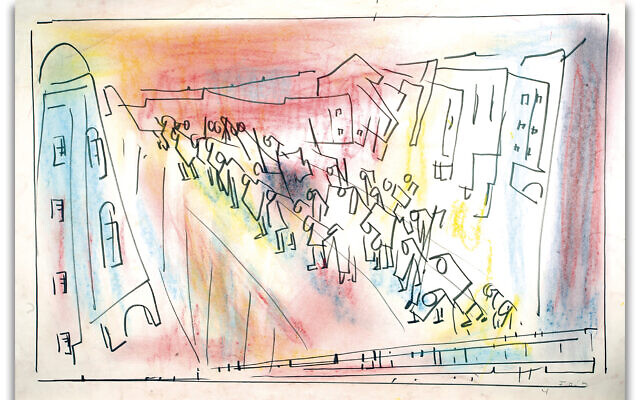 Sheva Zucker remembers that Yonia Fain kept turning the conversation back to his paintings.

Ms. Zucker, who concluded a 15-year tenure as executive director of the League for Yiddish this week, was interviewing Mr. Fain several years ago for a film in the league’s series of filmed conversations with Yiddish writers. Mr. Fain had published several books of Yiddish poetry.

But he also was a painter. It was his art that filled his apartment, and it had been art that had been his focus for the 30 years that he taught at Hofstra University.

It was Mr. Fain’s art that won him praise from the famous Mexican painter Diego Rivera, when Mr. Fain moved to Mexico after spending World War II in Japan and Shanghai.

And it is his art that is now on display at the Graduate Center of CUNY as part of an exhibit, “Portable Landscapes: Memories and Imaginaries of the Refugee Modernism.” 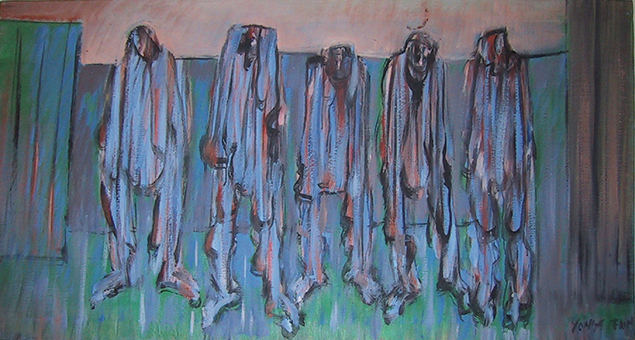 Yet perhaps Ms. Zucker got the last word. The film, “Yonia Fain: With Pen and Paintbrush,” is being shown at the center alongside the exhibit on Wednesday night (see box) and the film will be accompanied by poetry. Ms. Zucker will read some of Mr. Fain’s poems, in Yiddish and translated into English. Gitl Schaechter-Viswanath of Teaneck will read some of her own poems. Boris Sandler, the former editor of the Yiddish Forverts, will read some of his.

Ms. Schaechter-Viswanath remembers meeting Mr. Fain when she was about 14 years old, at a Yungtruf — that’s Youth for Yiddish — meeting held in his apartment.

“I remember thinking this was a weird place for a Yiddish event,” she said. “There were huge paintings all over. He had long hair and seemed a little bit bohemian.”

Mr. Fain was born in 1914 in Ukraine. After World War I, his family moved to Vilna, where he studied painting and graduated from Vilna’s Academy of Fine Arts. He was living in Warsaw with his wife when the Germans invaded Poland in 1939. They fled east and made their way to Vilna. When the Soviets occupied Vilna in 1940, they obtained forged travel visas for Japan and made their way there through Siberia. They waited out the war in Japan and in Japanese-occupied Shanghai.

There, Mr. Fain became friends with Ms. Zucker’s father, Meyer Zucker. “The two of them spent almost seven years together as refugees,” Ms. Zucker said. “I got to know him because of that connection.”

The film, in Yiddish with English subtitles, includes “a nice little chunk about the years in Shanghai,” Ms. Zucker said.

Yevgeniy Fiks, the organizer of the event, compiled “The Yonia Fain Map of Refugee Modernism” in 2019.

Like Ms. Zucker’s father, Mr. Fain was a Bundist, “that is to say, a Jewish socialist. It was a very important party in Eastern Europe before the Holocaust. In the film, he says some interesting and inspiring things about the Bund: what it meant to him, what it meant to the Jewish workers at the time.”

In 1948, Mr. Fain and his wife got visas for Mexico, where he had a job as a Yiddish teacher at a teacher’s seminary.

“He wanted to paint murals,” Ms. Zucker said. “He always talked about himself as living with history. He had witnessed so much. He had memories of World War One. He made the acquaintance of Diego Rivera, who very much supported him. He got a commission to make a mural at the Ashkenazi cemetery in Mexico City. It was on the theme of Ezekiel’s bones, the bones that will rise again.

“For Yonia, that really was the highlight of his career. He was a survivor, and he lost his parents, who were among the 70,000 Jews murdered at Ponary outside of Vilna.

“He painted a lot of Jewish themes and Holocaust-related stuff in particular,” she added. 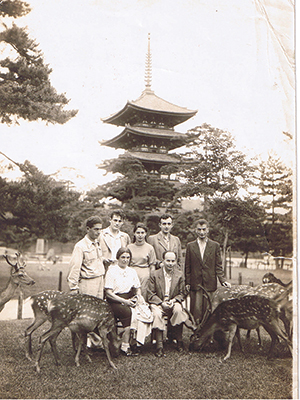 The Bundist group in Nara, Japan, during World War II. Meyer Zucker is at left, with Yonia Fain standing next to him.

Ms. Zucker said that by the time the film was made, Mr. Fain “was virtually blind. In his last decade or so his vision became very bad. He was kind of like Beethoven was to music. Until his very last days he would trudge up to his studio on the fourth flour and he would paint.

“What exactly could he see? Probably not that much. But he knew what he wanted to paint.

“It was the same with his poetry in the later years. He would dictate his poetry to this woman who knew Yiddish — it’s not so easy to find people like this — and then asked me to edit all of this stuff into a book.”

Ms. Schaechter-Viswanath said that she will read three or four poems in Yiddish and English when the film is shown. “I tend to write poems about experiences. I take day-to-day events and experience them and then I write a poem about them. I’m not into writing poems about nature or about poetry.

“One I wrote recently is titled ‘The Orange.’ It recounts an experience I had in Israel eating an orange that was not what I expected.”

Ms. Schaechter-Viswanath writes poetry only in Yiddish. “I only translate when I must,” she said. “I just don’t feel it in English. Yiddish is my first language, the language I’m really emotional in. By default, that was the language I started writing poetry in.

“When I was in my 20s, Yungtruf started a creative writing workshop. A bunch of Yiddish poets would get together and read for each other. It motivated and encouraged me to write. Otherwise, I didn’t have any kind of writing discipline — which I still don’t have.

“I just went away on a vacation. I had to sit on a plane for five hours. That is the best.”

Because my language
Is now spoken by so few people –
I speak to myself more than befits
Someone still in command of all his faculties.

I don’t want to prove anything,
I just talk,
Because I love to death
Wandering
Through domains of Yiddish.

Without Yiddish, bread
Would not satisfy my hunger
And the wonders of the world
Would not have words enough
To express my wonder.

A person with a home can be relocated,
A plant – transplanted,
Yet a poem in translation
Is a rainbow without a sky,
And a fresh quiver transported
Trembles in a straight-jacket.

In Yiddish there stand at my head of my bed
Wanderers with sacs full of stars,
And only Yiddish can interpret
The meaning of quarrelsome life.

What: Film, “Yonia Fain: With Pen and Paintbrush,” followed by Yiddish poetry reading and tour of the exhibit “Portable Landscapes: Memories and Images of Refugee Modernism,” which features Mr. Fain’s work. Yevgeniy Fiks, a participating artist and the event organizer, will guide the tour.