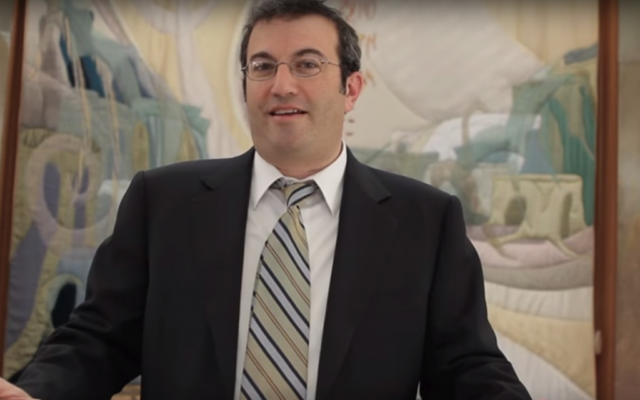 Rabbi Ari Berman has emerged as the search committee’s top candidate to be the next president of Yeshiva University, according to sources who are familiar with the process.

A product of both YU’s college and its affiliated rabbinical seminary, for 14 years Berman was a rabbi at the Jewish Center, a prominent modern Orthodox congregation on Manhattan’s Upper West Side. He taught Talmud at YU beginning in 1998.

Berman was promoted from assistant rabbi to lead the Jewish Center in 2000, and remained there until he immigrated to Israel in 2008. The congregation, which has been home to many YU donors and lay leaders, is something of a leadership farm team for the school. An earlier Jewish Center rabbi, Norman Lamm, left to become YU’s president and head of yeshiva in 1976. Another, Rabbi J.J. Schachter, now is a professor at YU and a senior scholar at its Center for the Jewish Future.

Yeshiva University’s Office of Communications and Public Affairs would not comment on matters relating to the presidential search, and JTA was unable to reach Berman in Israel.

Whoever succeeds Richard Joel as president will face a host of challenges. YU lost money in Bernard Madoff’s Ponzi scheme in 2008 and ran an operating deficit for seven straight years. Last year, it offloaded the Albert Einstein College of Medicine to the Montefiore Health System, losing half of its endowment in the deal.

YU also has been rocked in recent years by a series of accusations of physical and sexual abuse that took place at its affiliated boys’ high school in the 1970s and ‘80s. The cases could not be prosecuted because they exceeded the statute of limitations.

Berman was pegged by many modern Orthodox insiders as a possible YU president because of his prominent perch at the Jewish Center, his intellectual capabilities, and his political savvy. After he moved to Israel and kept a relatively low profile there, however, much of the chatter died down.

But during his time in Israel, Berman earned a doctorate in Jewish thought at the Hebrew University in Jerusalem. He now serves as rosh hamerkaz, or head of the center, at Hechal Shlomo, the Jewish Heritage Center, in Jerusalem. He also is an instructor at Herzog College, a teachers’ college in the West Bank settlement of Alon Shvut, outside Jerusalem.

Like Joel, who was the president of Hillel International before he moved over to YU, Berman is not well established in general academic circles. And unlike Joel, he lacks significant fundraising experience and never has managed a sizable organization. But he is well connected in the modern Orthodox world, maintains good relations with the school’s leading rabbis, and demonstrates an ability to forge relationships with its alumni and donors.

Though plucked from a major Jewish organization, Joel was seen as a departure, given that he was not a rabbi or a Torah scholar. And in looking for his successor, the search committee again seemed to be looking beyond rabbinical circles. In July, Stephen Joel Trachtenberg, the former president of George Washington University, who is heading the search, said that it was time to reevaluate what is most important in a YU president, prioritizing a nuts-and-bolts candidate over an innovative modern Orthodox philosopher.

Trachtenberg questioned whether Lamm would have been selected had he applied under today’s circumstances.

“I said to the committee, to the faculty, to the rabbis and the board of trustees that they needed to learn from past experiences and be more flexible,” Trachtenberg said. “What you want to do is open yourself up to a greater definition of what it means to be a scholarly person.”

Trachtenberg said that today, YU’s financial health is “sufficient,” but that its future stability demands “a creative person who knows what they’re doing.”

“The financial side is a very big challenge,” he said. “The challenges are those of money. Running a university is a labor-intensive enterprise. Jewish philanthropy is being drawn in all directions.”

While the shift away from the rabbi-scholar model was seen as a move toward enhanced fundraising and management, things didn’t work out as planned. In fact, YU was in desperate financial straits when Lamm assumed the post in 1976. By the time he stepped down as president, however, the university was on strong financial footing. During Joel’s tenure, the school’s fortunes plunged again.

Before zeroing in on Berman, the search committee was considering another departure from the tradition of hiring rabbis and Jewish communal leaders. Nick Muzin, the deputy chief of staff for Sen. Ted Cruz’s 2016 presidential campaign, met with the head of the search committee many times as part of the search. In July, however, YU announced that Muzin was no longer being considered.

As it turns out, Berman fits Lamm’s profile far more closely, though he lacks the same scholarly standing that Lamm had upon when he was plucked from the pulpit. That said, Lamm lavished praised on Berman when Berman became a Talmud instructor at YU According to a 1998 article in the Commentator, a YU student newspaper, Lamm, then YU’s president, called Berman “a rising star in the firmament of Talmudic scholars and rabbis. His talents are enhanced by an attractive personality and a sterling character, and we, therefore, are delighted with this appointment.”

Thought the consummate YU and modern Orthodox insider, Berman also has displayed a willingness to engage in discussion and debate with those across the political and denominational spectrum. In recent years, he has returned to the Jewish Center to debate journalist Peter Beinart, who calls for a boycott of goods produced in Israeli settlements, and to engage in conversation with Ruth Calderon, a secular Israeli Talmud scholar and former Knesset member with Yesh Atid, a party that prioritized reforming the country’s policy on religious affairs.

At the Jewish Center, Berman avoided being sucked into many of the prominent feuds and ideological battles that rage between modern Orthodoxy’s ideological camps. Similarly, on Israel, Berman balanced many competing constituencies, managing to be an unabashed supporter of Israeli security and settlements without being seen as an opponent of Israeli territorial concessions.