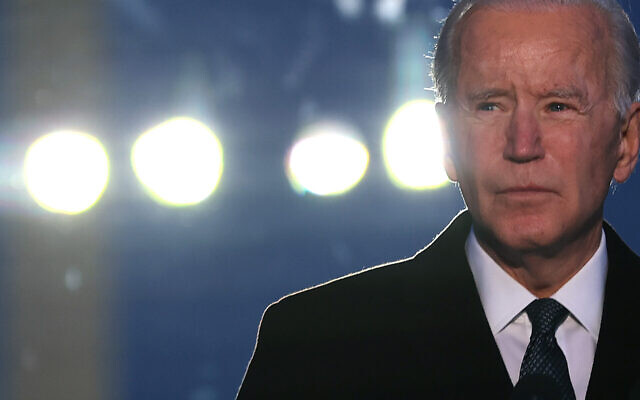 Joe Biden spoke during a memorial service for American victims of the COVID-19 pandemic, Jan. 19, 2021, the eve of his inauguration as president. (Chip Somodevilla/Getty Images)

The letter went out at midday Friday, from five major Jewish organizations, asking President Joe Biden to “use your bully pulpit to call out antisemitism” in the wake of a spike in attacks on Jews since the launch of the latest Israel-Hamas conflict.

By 8 a.m. Monday, Biden was at his Twitter bully pulpit, saying “the recent attacks on the Jewish community are despicable, and they must stop.”

At 4 p.m. the same day, representatives of all five organizations were on a video conference call with top staffers at the White House and the Department of Homeland Security.

The participants were knocked back by the immediacy of the response.

“You know, the next business day after the letter was sent, they brought a good group of key officials together who are really substantive,” said Elana Broitman, the director of the Jewish Federations of North America’s Washington office, who attended the meeting.

The White House would not comment and the three Jewish officials who returned the Jewish Telegraphic Agency’s calls did not feel comfortable describing what the White House officials said, or naming on the record who was present. The White House did not return a request for comment.

The groups that sent the letter and which were represented at the meeting in addition to the JFNA are the Orthodox Union, the American Jewish Committee, the Anti-Defamation League and Hadassah.

The participants said that each of the five requests they made was addressed during the meeting. These included nominating an antisemitism monitor at the State Department, naming a Jewish liaison, convening a summit on antisemitism, adding funds to secure nonprofits and keeping in place an executive order by President Donald Trump that combats antisemitism on campuses.

The last request, having to do with Trump’s executive order, could stir controversy. Some liberal groups, including a number of Jewish ones, have expressed concern that it targets legitimate Israel criticism, and Biden has shown a tendency to purge Trump’s more controversial executive orders.

“We went through the specifics that we did raise in our letter, and they were certainly open to all of those things and indicated that they were all good suggestions and they’re working on the things that we raised,” said Nathan Diament, the Washington director for the Orthodox Union.

“We should not take for granted the importance of the president recognizing that America has a problem with antisemitic violence and President Biden recognizes that action is required to protect Jewish communities and rollback the rise in hate against religious and ethnic minorities, over the short and long term,” said Karen Paikin Barall, the Washington director for Hadassah.

The groups are convening a virtual rally on Thursday to combat antisemitism, which they say will include top lawmakers from both parties in Congress and from the Biden administration.

Broitman said the meeting was likely the first of many.

“I was left with the impression that more meetings and more steps are to come,” she said.