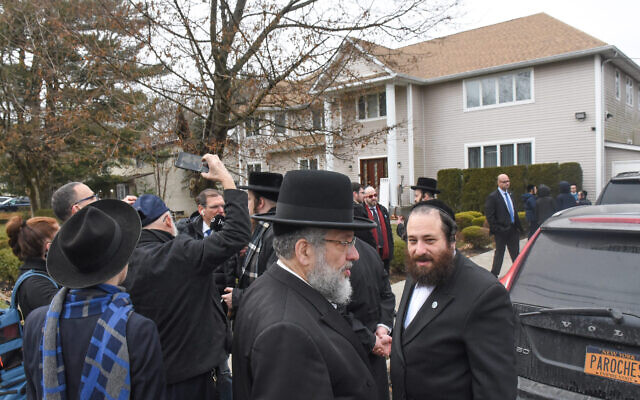 Members of Rabbi Chaim Rottenberg's community in Monsey, N.Y., gather in front of the house where five people were injured in a knife attack during a Hanukkah party. (Stephanie Keith/Getty Images)

A 71-year-old man wounded in the stabbing attack on a rabbi’s home in Monsey, New York, remains unconscious and on a respirator.

The doctors for Josef Neumann are not optimistic that he will regain consciousness, his family said in a statement released by the Orthodox Jewish Public Affairs Council. If Neumann does “miraculously” partly recover, the doctors say, he is expected to have permanent brain damage that will leave him partially paralyzed and speech-impaired for the rest of his life.

The attacker’s knife penetrated Neumann’s skull and cut into his brain, according to the statement. Because of his condition, doctors have not been able to operate on his shattered right arm.

The statement said that Neumann has seven children, “many grandchildren,” a great-grandchild, and brothers and sisters.

“We urge fellow Jews across the United States and around the globe to please share on social media their own experiences with anti-Semitism and add the hashtag #MeJew,” the family said. “We shall not let this terrible hate-driven attack be forgotten, and let us all work to eradicate all sorts of hate.”

Prosecutors filed federal hate crimes charges Monday against the alleged attacker, Grafton Thomas, 37, of Greenwood Lake, New York. Thomas’s family said in a statement after he was arraigned on Sunday that he “had a long history of mental illness and hospitalizations” and “no known history of anti-Semitism.”

Police found handwritten journals expressing anti-Semitic views, including references to Adolf Hitler and “Nazi culture,” and drawings of a Star of David and a swastika at his home, and used his phone to look up information about Hitler, hatred of Jews, and the location of nearby synagogues.

STATEMENT BY THE FAMILY OF JOSEF NEUMANN with details about their beloved father following the #Monsey stabbing attack, and with a call to Jews around the world to share their experiences with anti-Semitism and adding the tag #MeJew.https://t.co/7B5p5qfNE4 pic.twitter.com/nr4y3lTLwO