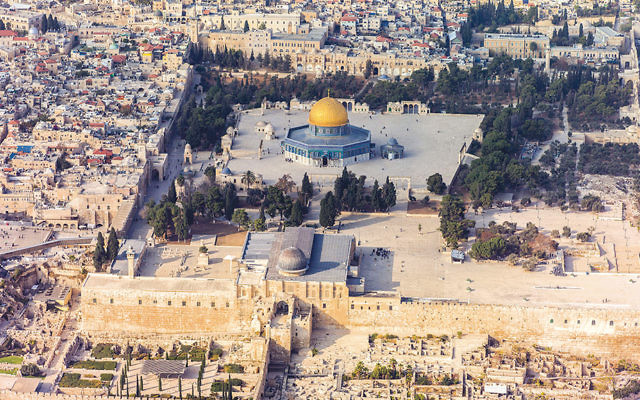 An aerial view of the Temple Mount in the Old City of Jerusalem. (Wikimedia Commons)

The United Nations’ cultural body, UNESCO, passed a resolution last week that condemns Israeli actions at Jerusalem’s holy sites and ignores any Jewish ties to the Temple Mount and the Western Wall complex.

Calling the vote “another hallucinatory decision” by the group, Israeli Prime Minister Benjamin Netanyahu said, “To say that Israel has no connection to the Temple and the Western Wall is like saying that China is not connected to the Great Wall of China or that Egypt has no connection to the pyramids. I believe that historical truth is more powerful, and this truth will prevail.”

The resolution was backed by Algeria, Egypt, Lebanon, Morocco, Oman, Qatar, and Sudan on behalf of the Palestinians. Despite passing with 24 in favor and six against, 26 countries notably abstained from the vote. That’s more than those that supported it. The six countries voting against it were the U.S., Germany, the U.K., Netherlands, Lithuania, and Estonia.

The resolution affirmed “the importance of the Old City of Jerusalem and its Walls for the three monotheistic religions” and goes on to denounce Israel as an “occupying power,” condemning it for a number of “aggressions and illegal measures” at the holy site.

It also blames Israel for inciting violence on the Temple Mount, which it refers to exclusively as the Al-Haram Al-Sharif, a Muslim term for the holy site that means “the Holy Sanctuary” in Arabic.

Additionally, it condemns Israel’s construction work in the Western Wall Plaza by referring to it by its Muslim name, “Al-Buraq Plaza,” a reference to the horse that transported the prophet Muhammad from Mecca to Jerusalem, according to Muslim teachings.

Jonathan Schanzer, vice president of research at the Foundation for Defense of Democracies, said, “The move is ironic in the sense that the Israelis have probably done more than any other sovereign that has controlled Jerusalem to ensure that all faiths can have access to the city and practice their faith.”

The latest UNESCO resolution follows another one, passed in April, that also ignored Jewish ties to the Temple Mount. That resolution passed with 33 votes in favor, six against, and 17 abstentions.

Schanzer said that the politicization process at UNESCO has been growing since the Palestinians joined the international body in 2011.

“This sadly shows that UNESCO is heading in the direction of the U.N. Human Rights Council where it is a caricature of itself,” he said. “This underscores the dangers of the Palestinian statehood initiative, this process after the Palestinians joined of delegitimizing anything regarding Israel without any basis for it. It is a warning for any other U.N. agencies that may begin working with the Palestinians.”

Despite the latest outcome, not a single European country voted in favor of the resolution. Such countries as France, Spain, Slovenia, and Sweden all abstained. Other allies of Israel, including India, also abstained.

Israel’s ambassador to UNESCO, Carmel Shama-Hacohen, said that the outcome of the vote was a significant victory for Israel. “The Palestinians have lost all support in Europe, including France, Spain and even Sweden,” Shama-Hacohen said. “Along with the shift of position of key countries such as India and Argentina to abstention, the vote constitutes a significant achievement [for Israel] compared to the opening conditions for prior votes.”

The Temple Mount — the site of the two Jewish temples — long has played a pivotal role in Jewish affairs and worship. Yet after the Second Temple was destroyed by the Romans in the first century C.E., the site passed through a succession of foreign rulers, from the Muslim caliphs and the Crusaders to the Ottoman and British empires. While the site was under control of the Muslim Umayyad Caliphate in 691 C.E., the Dome of the Rock was built over the site of the former Jewish Temple.

After failing to gain control of Jerusalem’s Old City during the 1948 War of Independence, Israeli forces captured the Old City and the Temple Mount from Jordan during the 1967 Six-Day War. Despite regaining Jewish sovereignty over the Temple Mount for the first time in nearly 2,000 years, Israeli leaders relinquished religious sovereignty over the site to the Jordanian-run Islamic Waqf. Under that arrangement, which became the status quo, Jewish prayer was forbidden on the Temple Mount, and non-Muslim access was restricted to certain days and hours.

Meanwhile, before the vote, the Israeli Foreign Ministry launched an all-out diplomatic blitz to convince as many countries as possible to either reject or abstain from the vote.

As part of that effort, the Foreign Ministry created a brochure detailing Temple Mount’s Jewish history, including a picture of the Arch of Titus in Rome, which shows a Jewish menorah carried off by the Romans.

Similarly, a bipartisan group of 39 U.S. lawmakers wrote a letter to the UNESCO executive board asking them to vote against the resolution.

“UNESCO’s anti-Israel agenda has long been apparent and this latest lopsided vote in favor of this shameful resolution is no different,” Rep. Ileana Ros-Lehtinen (R.-Fla) said. “This resolution attacked the historical connection between Judaism and Jerusalem as part of a larger effort throughout the U.N. system to delegitimize the Jewish State with Jerusalem as its capital.”

Rep. Ros-Lehtinen added that UNESCO’s continued anti-Israel focus “once again proves that this organization is in desperate need of reform, and until those reforms are made, I will continue to ensure that Congress does not allow any U.S. taxpayer dollars to be used to fund this broken organization.”

Prominent Jewish and Christian groups also weighed in on condemning the UNESCO resolution.

“UNESCO’s leadership has approved a blatantly biased resolution that attempts to erase the specific deep-rooted, historical connection of Jews (and Christians) to Jerusalem, Israel’s eternal capital,” the Orthodox Union said in a statement. “It also unjustly singles out Israel with false accusations and criticism with regard to recent acts of terrorism.”

The World Jewish Congress’s CEO, Robert Singer, said the resolution is “a document which is full of false accusations against Israel, and of aggressive language that will only serve to stoke unrest and exacerbate tensions.”

“The Jewish history of Jerusalem is also Christian history, and the Jewish Temple was the scene of numerous New Testament stories,” she said. “Jesus visited the Temple in Jerusalem and the Christian scriptures record His teachings and miracles that occurred there. If the Christian world does not stand up for the Jewish connection to Jerusalem, then one day we will discover that our own historical and spiritual connection to the Holy Sites there has also been erased.”

The move by the UNESCO executive board is expected to be followed by a similarly resolution to be voted on by the World Heritage Committee of UNESCO later this month. JNS.ORG