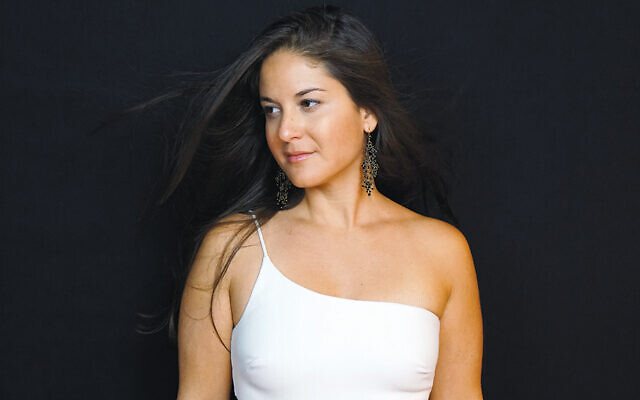 Israeli American singer Hadar Orshalimy truly enjoyed launching her new album earlier this month. “I haven’t felt so fulfilled since my wedding,” she said, explaining that she has always tried to think outside the box, so she wanted a unique setting and a special audience for the launch.

Hosting it in a “stunning apartment just miles away from Tin Pan Alley,” where the songs she presented were composed — keeping the address secret until attendees had gotten tickets — she served cocktails and hors d’oeuvres to her many well-wishers, including a substantial number from the two New York City congregations that helped fund her project, before offering a concert replete with both songs and stories. The singer said she was well pleased with the evening.

Ms. Orshalimy’s album contains ten jazz standards from Jewish composers, including George and Ira Gershwin, Harold Arlen, and Jerome Kern. “I recently discovered the incredible contribution of Jewish composers to the distinctly American invention of jazz and the Great American Songbook,” she said. This occurred as she prepared to perform “for some major dignitaries such as Barack Obama, Bill Clinton, and Ehud Barak, to name a few. I decided I wanted to honor and shine a new light on the songs by recording an album of old jazz standards composed by Jewish composers.

“Thanks to my incredible musicians, the contemporary arrangements, and my soulful vocals, I believe we were able to reinvent this magical music, highlight the Jewish connection, and offer a new interpretation of beloved jazz standards that aim to reinvigorate and re-establish them in the public consciousness.”

Ms. Orshalimy, a singer/songwriter who grew up in Tel Aviv, is the daughter of an Iranian father, Avner Orshalimy, and an American mother, Beth Fishman. She moved to the United States for college and stayed in this country. Now, she’s a familiar presence in her Upper East Side Jewish community. She is a frequent soloist and conducts services at both Temple Emanu-El and Temple Israel there. “I have a residency at both synagogues,” she said. “I lead services twice a month, conduct High Holiday services, and give concerts.”

Ms. Orshalimy is married to singer/songwriter Sheldon Low, known in his own right as a Jewish rock musician. The two have co-written four albums and jointly perform both Jewish and secular music all over the country, and they both also work on solo projects. Mr. Low is the artist-in-residence at Temple Israel, and he and Ms. Orshalimy have an indie-folk-pop group called “We Are the Northern Lights.”

Ms. Orshalimy came to Jewish music about eight years ago, “doing music for children in Larchmont and New Rochelle,” she said. “But I wanted to do more performative singing.” Although she has remained “on great terms” with the two Westchester County communities, this was not what she ultimately wanted, she decided. Turning her sights back to New York City, “I moved to Park Avenue Synagogue for four years as a music specialist, doing some work with adults, some with children. But my calling was to sing as a soloist.”

When she recently discovered what she called the “amazing” contribution of Jewish songwriters to the Great American Songbook — and decided to make an album celebrating this music — she enlisted the help of the two congregations where she now works, and both were eager to sponsor the project.

Her mother was helpful as well.

“My mother said she was so excited when I told her about the album, you would think I had told her she would be a grandma,” Ms. Orshalimy said. “The next morning, she sent me fifty songs to listen to. For the album, I chose the ones that made me sob, the ones I felt I could have written.”

Ms. Orshalimy moved to New York after attending the Berklee College of Music in Boston, and has lived there ever since, earned her living as a musician. “I grew up in a house full of musicians, all amateurs, incredibly talented,” she said. “We would sit around, sing, and argue about chords. I spent my summers in Michigan, and my Uncle Steve was an incredible piano player.”

She has fond memories of her childhood singing career, particularly of Anat Morag, her choir director in fourth grade, back in Tel Aviv. Ms. Morag “was the first person to highlight me,” Ms. Orshalimy said. “Me and two other girls. We got solos and performed with an orchestra in Tel Aviv.

“As a little girl, I wanted to be in a singing group in the army,” she recalled. “But as I got older, I thought, I can sing all my life but will only have military experience once.” Choosing to do something unique in the military, which at the time would not let women serve in combat, “I saw an opportunity to gain valuable experience.”

She decided to become a trainer and teacher in the infantry. Taking an intensive course in nuclear, biological, and chemical warfare training, “I learned how to manage people, to be a leader, command the room, be a good educator,” she said. Her preparation was both physical and written, simulating training in the field. “It was a very intensive physical course,” she said, but noted that the training helps her even now.

She sang with choirs when she was a child and with teen singing groups later on, “like ‘Glee,’ but after school.” She sometimes was featured on TV, hired as a soloist. After the army, she became a Kochav Nolad [Israeli Idol] contestant, “but I was afraid that I wouldn’t be able to go to school in America if I made it to the top level.”

So in one way, not winning that contest was a relief. But “it was one of the first times I didn’t ‘pass.’ I realized that life wouldn’t always be so easy. That doesn’t mean you’re not good. That’s life.”

Her newfound passion, popularizing jazz by Jewish composers, was born when she realized that she could shed a light on these Jewish songwriters by performing their music in her own style. She was so enthusiastic about the idea that when she approached her two congregations in April with the idea of sponsoring an album and they agreed immediately, she headed straight to a studio in Teaneck. Five weeks later, she emerged with the finished product. She credits the Teaneck Sound Studio with providing the professionalism, guidance, and generosity she needed. “It was such a positive experience,” she said.

Why did Jewish composers embrace jazz? “I’ve looked into it, and there’s no definite answer,” she said. Still, she pointed out, there are several theories. One holds that the music industry was much more accepting than other fields, she said, citing her grandmother’s inability to get a job with Ford in Detroit as an example of discrimination against Jews. In music, “they found themselves in an industry that embraced them.”

As it happens, “they were an incredibly talented and crucial part of the whole industry. It’s mind-boggling. A people who have always been persecuted went where they were accepted and dominated it, painting it all the beautiful colors of the rainbow.” Israel, which has always been under threat, boasts more musicians than other countries, she said, citing the country’s need to think outside the box. “And thinking outside the box translates into jazz.”

She noted as well that many of these composers had a strong Jewish upbringing. “Arlen and Weill had fathers who were cantors,” she said, “and Gershwin’s great-grandfather was a rabbi.” In addition, she pointed out that klezmer-like melodies appear in songs like “Rhapsody in Blue.” “I know a lot of melodies were based on old Yiddish tunes,” she said. “Some of Kurt Weill’s compositions were actually from Jewish liturgy and texts.

“I thought the Jewish world would be most interested in this project,” Ms. Orshalimy continued; she plans to tour with her new album. “But the jazz world is also interested, and the album got radio play in Israel on a jazz station two weeks ago. I’d like to try and off the whole project, including both the music and the stories behind the music and the composers. This would be a good program for congregations.”

Hadar Orshalimy’s album, “It Never Was You,” is playing on all streaming channels. To order a hard copy, go to facebook.com/HadarMusic or instagram.com/hadarorshalimy.