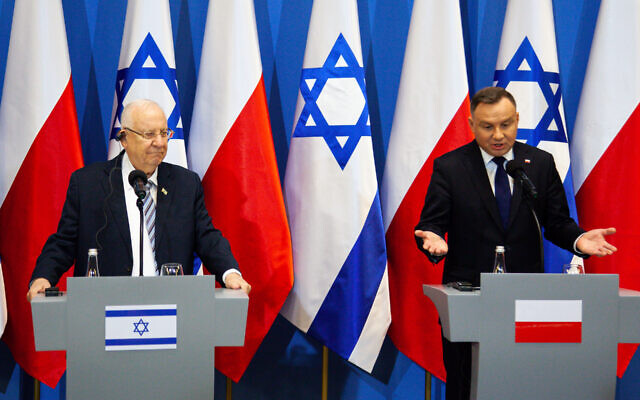 Israeli President Reuven Rivlin assailed Polish complicity in the murder of European Jews during the Holocaust during a visit to mark the 75th anniversary of the liberation of Auschwitz.

Speaking at a joint appearance Monday with Polish President Andrzej Duda in Krakow, Rivlin said that both Jews and Poles were victims during World War II. He then launched into a subtle rebuke of recent efforts to rewrite Poland’s wartime history.

“Poland, the place where the Jewish people flourished for centuries, became its biggest cemetery,” Rivlin said. “We remember that during the war, the Polish people fought with courage and strength against Nazi Germany. But we also remember that many Poles stood by and even assisted in the murder of Jews.”

Rivlin’s comment came amid an ongoing effort by some European countries to shift the narrative around their responsibility for Holocaust crimes, an effort that historians deride as a betrayal of the past but one that Israel — with some notable exceptions — has been reluctant to publicly oppose.

Poland has been engaged in a multi-year campaign to burnish its wartime record and shed the stigma of Holocaust collaboration, an attempt most prominently reflected in the 2018 passage of a controversial law making it a crime to accuse the country of responsibility for Nazi crimes.

Similar laws have been passed in Ukraine and Latvia, and Lithuanian lawmakers are currently considering one as well.

The Polish law led to a crisis in relations between Jerusalem and Warsaw that Israeli Prime Minister Benjamin Netanyahu sought to tamp down with a statement that avoided the pointed observations Rivlin made on Monday. In a 2018 statement issued jointly with Polish Prime Minister Mateusz Morawiecki, Netanyahu said that “structures of the Polish Underground State supervised by the Polish Government-in-Exile created a mechanism of systematic help and support to Jewish people.”

Netanyahu’s attempt to tone down the rhetoric was seen by many scholars as an acceptance of the Polish narrative. But Yad Vashem, Israel’s usually apolitical Holocaust authority, issued an unprecedented statement criticizing his “grave errors and deceptions.”

On Monday, Rivlin said that both Israel and Poland “must sanctify the purity of history, to leave the work of historical research to historians and experts from Israel, Poland and other countries who research the Holocaust, and let political leaders take responsibility for shaping the present and the future.”

This is not the first time that Rivlin has spoken out against the perceived historical revisionism of a European ally. On a visit to the Jasenovac death camp in 2018, the president thanked his Croatian hosts for their efforts to take responsibility for their wartime legacy while gently chiding those who repress their past.

“Some believe especially today that the historical circumstances of World War II, the fact that they were under Nazi occupation, exempts them from any moral responsibility, personal and national, for the horrors that took place in their land,” Rivlin said.

Addressing the Ukrainian parliament in 2016 during commemorations of the 75th anniversary of the Babi Yar massacre, Rivlin took lawmakers to task for legislative efforts to whitewash the record of the Organization of Ukrainian Nationalists, a far-right movement whose members collaborated with the Nazis and were complicit in the deaths of tens of thousands of civilians during the war.

In a speech that elicited harsh criticism from ultranationalist lawmakers, Rivlin condemned the “sin of concealment and destruction of the [victims’] memory.”

“We must not be partners in a second crime,” Rivlin told lawmakers. “We must not play a part in the sin of forgetting or denial.”

Shuli Davidovich, a senior foreign policy adviser to Rivlin, said the president believes history should be left to historians and cautioned that failing to keep those domains distinct harms efforts to combat rising anti-Semitism.

“This is very dangerous and can easily run against democratic values and might endanger the foundations of democracy around the world,” Davidovich told JTA by phone from Berlin, where she is traveling with Rivlin.

Other than Rivlin, senior Israeli officials have been largely quiet in the face of resurgent European revisionism, a movement seen as driven by a desire to forge new national identities after decades of communist repression.

Netanyahu has said nothing about the bill under consideration in Lithuania saying that neither the country nor its leaders participated in the Holocaust. Some 95 percent of the 250,000 Jews in Lithuania were wiped out during the war, and historians say its leaders and citizens were enthusiastic participants.

Efraim Zuroff, director of the Simon Wiesenthal Center’s Jerusalem office, said the difference between how Rivlin and Netanyahu have approached this issue can best be explained by the offices they hold.

“The role of a president is far less political, ostensibly, certainly in the international arena,” Zuroff said. “And consequently [Rivlin] has more latitude to describe a very unpleasant reality than Netanyahu has.”