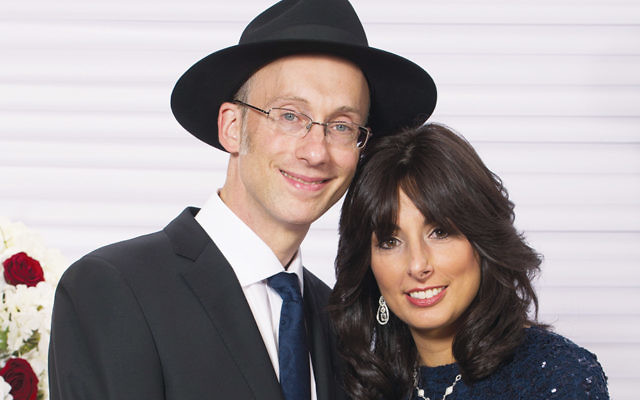 Rabbi Zvi Sobolofsky, the founding rabbi of 13-year-old Congregation Ohr HaTorah in Bergenfield, and his wife, Efrat, will be honored on May 9 at the annual RIETS Gala Evening of Tribute at the Grand Hyatt Hotel in Manhattan.

Rabbi Sobolofsky is a rosh yeshiva at Yeshiva University’s Rabbi Isaac Elchanan Theological Seminary (more frequently known as RIETS), a teacher at YU and in the Bergen County community, and a popular lecturer, author, and decisor of Jewish law.

“My first preparation for communal work took place within the walls of the YU, and now I have a shul made up of many YU graduates,” Rabbi Sobolofsky said.

His synagogue, which counts more than 100 members and 75 affiliate members, was founded in answer to the steady growth of Bergenfield’s Orthodox community.

Congregation Beth Abraham, the first Orthodox synagogue in the borough, was bursting at the seams 13 years ago. Its spiritual leader, Rabbi Yaakov Neuburger,  who also is the head of the undergraduate Yeshiva Program/Mazer School of Talmudic Studies at YU, was among those who encouraged Rabbi Sobolofsky, who happened to be the 1987 valedictorian of the Mazer Program, to spearhead a new shul to accommodate the influx of Orthodox families.

Rabbi Sobolofsky explains that although he had been serving “a wonderful congregation” in Paramus for five years at that time, he had close relationships with many young couples in the Bergenfield area who knew him from YU or attended his lectures at the Bergen County Beis Medrash program. One of those students was Rabbi Daniel Hartstein, who now lives in Israel.

“I met him in the barber shop after Tisha B’Av and he approached me and said, ‘Come to Bergenfield and start a shul,’” Rabbi Sobolofsky said. “That got the ball rolling. He became Ohr HaTorah’s first president.”

Rabbi Sobolofsky grew up in Riverdale and received his rabbinic ordination from RIETS in 1990. Now, his sphere of influence goes beyond the Bergenfield community. He continues to give classes at the Beis Medrash of Bergen County, which is housed at Congregation Bnai Yeshurun in Teaneck, and he has 5,321 lectures and articles archived on the website YUTorah.org. In addition, many people in the greater area call him with halachic questions.

“People get up at 6 in the morning to learn with him,” said Efrat Samet Sobolofsky, who also is a YU alumna. She earned a master’s degree and then a doctorate in social welfare and administration from the university’s Wurzweiler School of Social Work.

Dr. Sobolofsky is the director of YUConnects, a relationship-building program that recently celebrated its 324th engagement. For the last 20 years, she has been the coordinator of respite services for the government- and community-funded Jewish Association for Developmental Disabilities in Paramus. She now works with about 150 families in Bergen and Passaic counties, providing trained staff for short periods of time to give family members a break from caregiving.

“We find it most appropriate that RIETS would honor us, because we feel indebted and grateful to the YU faculty, community and administration for giving us the leadership skills and professional talents and passion to become involved in a communal role,” Dr. Sobolofsky said.

Her father and several of her brothers went to YU, as did Rabbi Sobolofsky’s late father, Stanley.

The Sobolofskys, who have been married for 23 years, are the parents of two sons and two daughters, ranging in age from 21 to 11.

Youth leadership is another area in which Rabbi Sobolofsky is closely involved; he earned a master’s degree from YU’s Azrieli Graduate School of Jewish Education and Administration in 1996.

He is a halachic adviser to members and counselors at NCSY, the youth movement of the Orthodox Union, and teaches at NCSY Kollel, a summer program in Israel for American high school boys that offers high-level Torah learning and competitive sports.

The program will include a memorial tribute to Rabbi Meyer Kramer, an immigrant from Belarus who graduated from RIETS in 1941 and pursued dual careers as a rabbi and lawyer. His son, Rabbi Doniel Kramer, a YU Guardian, established the Rabbi Meyer Kramer Rabbinic Fellowship six years ago.

More information on the dinner is available from Rabbi Caleb Fisher at Caleb.Fischer@yu.edu or by logging onto https://blogs.yu.edu/news/riets-annual-evening-of-tribute-3.