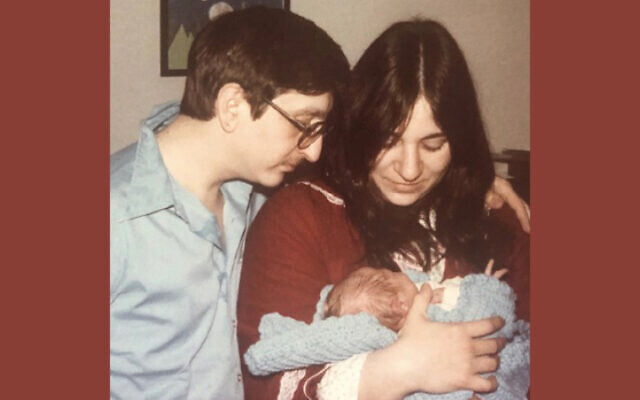 Many years ago, two young men met at the Manhattan School of Music.

One of them was sitting on the floor, writing something — a letter? A poster? Something else? That part they didn’t remember later — in Yiddish. The other young man was intrigued.

That was the start of a friendship, first between the two of them, then including their wives, eventually their children, and recently even their grandchildren, that ended only when David Feinberg died.

Now, Zalmen Mlotek of Teaneck remembers his dear friend — his “soul brother,” the person who always could make him laugh louder and longer and harder than anyone else ever could — a month after Mr. Feinberg died. He and his children — his sons Avram and Elisha, and his daughter Sarah — present an online concert for Mr. Feinberg’s shloshim.

It’s set for next Sunday, which also is Father’s Day, in another nod to Mr. Feinberg, who was a devoted parent. (See box.)

Mr. Feinberg also was a musician, songwriter, poet, visual artist, and teacher, Zalmen Mlotek said; a man who was as creatively gifted as he was personally unambitious, glad to make art and to share it, but uninterested in the kind of life he’d have had to lead if he wanted to sell it. 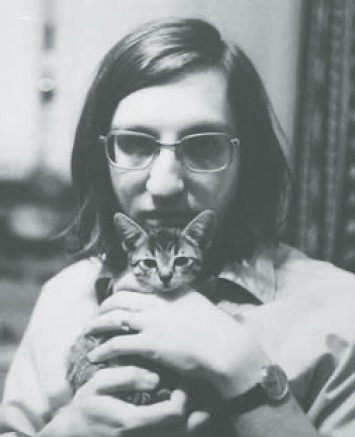 David Feinberg when he was young.

Mr. Feinberg was born in Kingston, a Hudson Valley town, in 1951, and grew up in Hudson Valley and the Catskills, the oldest of three, very clearly Jewish but without a strong Jewish community, a musician and artist surrounded by athletes, the loving son of a mother who deeply loved him back but died the day after he turned 14. As soon as he could, he escaped; he went first to Sullivan County Community College and then to the Manhattan School of Music.

“He became a dance accompanist at the High School of Performing Arts in Manhattan; he was there for around 25 years,” Mr. Mlotek said. “He accompanied dancers, he wrote music for dance classes, and he basically became a guide and counselor to a lot of kids there.

“People could talk to him. He was that kind of person. He wrote songs, folk-y kinds of songs, that he’d play on a piano or a guitar.” To listen to the songs now is to go through a time warp, back to the time when they were written; they’re straightforward, earnest, and lovely; his voice is growly, unassuming, seemingly artless, and goes direct to the heart. 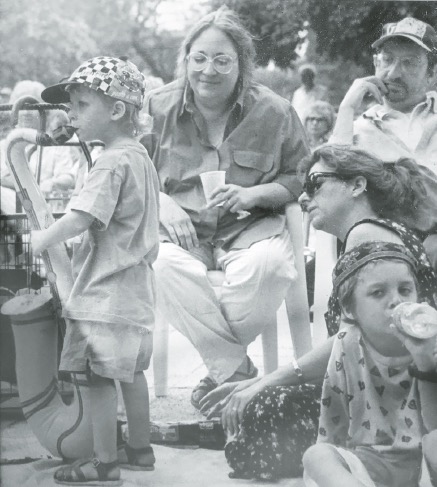 Years ago, Susan and David Feinberg and Debbie Mlotek and her sos, Avram and Elisha, sit in a park in Riverdale waiting for Zalmen Mlotek to perform.

He became increasingly Jewishly observant over the years; much of his music is set to the texts of the Jewish tradition. He did not become Orthodox, as Mr. Mlotek did; instead, he forged his own Jewish path, both authentic and eccentric. “You couldn’t put him in a box,” Mr. Mlotek said. “He wasn’t Reform and he wasn’t Orthodox; if anything, he probably was Conservative. But he would never consider himself anything but just a Jew.”

Mr. Feinberg became the music director of Beth Am in Washington Heights. That’s a synagogue that translates its own name so its message cannot be lost; it’s formally Beth Am: The People’s Temple. It’s a Reform synagogue, one of the many shuls, from across the Jewish streams, that became home to many of the Holocaust refugees and escapees who fled Europe and ended up in northern Manhattan. “David also led the choir there, and for many years he wrote music for them,” Mr. Mlotek said. “And he was very beloved. Very very beloved. They still sing his music, and they have some recordings of his music on their website.”

He also taught at Yeshiva University’s Belz School of Music, and he also led the choir there. “Many of the young cantors know him,” Mr. Mlotek said.

“He made cassettes of his music for us,” for his young family, he continued. “In those days,” when their children, his three and Mr. Feinberg’s two, all were young, “that’s how we listened to music.

“My kids grew up listening to those cassettes, these beautiful, comforting, quiet, moving songs. Most of them were in English, some were in Hebrew, and the kids would listen to it all the time.”

“It was the soundtrack to our children,” Avram — now Rabbi Avram Mlotek of Base Hillel in Manhattan — said. 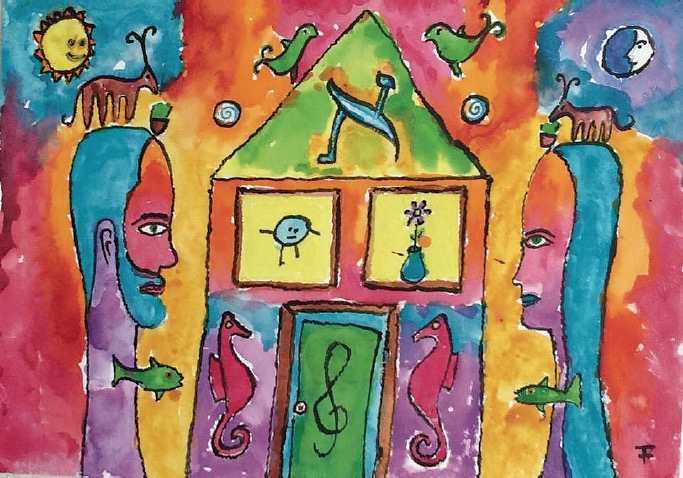 The first in David Feinberg’s alef beyz series, which also tells the biblical story of creation.

“The music is very moving, very touching, very relevant, and very real,” Mr. Mlotek continued. “It deals with all kinds of issues — with gun control, with friendship, with disease, with disappointment.” It deals with love, with pain, with uncertainty, and with joy.

The texts he used were from the Psalms, or Kabbalat Shabbat, or other parts of the Shabbat nusach, Mr. Mlotek said. When a text moved him, he’d use it.

“And he was very funny,” he added. “David was entirely unfiltered.” There’s a Yiddish saying, “Afn lung — afn tsung,” he said. What’s on your lung is on your tongue. In other words, if he thought it, he said it. “Whatever came to him, he said. And we laughed.”

David Feinberg and his wife, Susan, got married when they were very young — he was 21, and she was 23. They stayed married until he died, of unknown causes. They had two sons, Gabe and Zack, and two grandchildren.

“My wife, Debbie, says that one of the reasons she fell in love with me is that when we first were dating, I had a picture of David sitting with his son at the piano,” Mr. Mlotek said.

Avram Mlotek officiated at Mr. Feinberg’s funeral. “When Avram became a rabbi, David joked, ‘Great. Now I have someone to bury me,’” Zalmen Mlotek said. And that’s what happened.

George Robinson, the longtime music critic at the New York Jewish Week, is a member of Beth Am’s choir; like Mr. Mlotek he knew Mr. Feinberg for decades.

“Mr. Feinberg’s his compositions have a power, an exhilaration that belied his gentleness and his slight frame,” Mr. Robinson wrote. “The writing reflects the nimbleness of his spirit and his dry, wry wit, especially in his secular English-language pieces. Ultimately, his religious music is deeply serious, suffused with an intense spirituality and melodic inventiveness.” 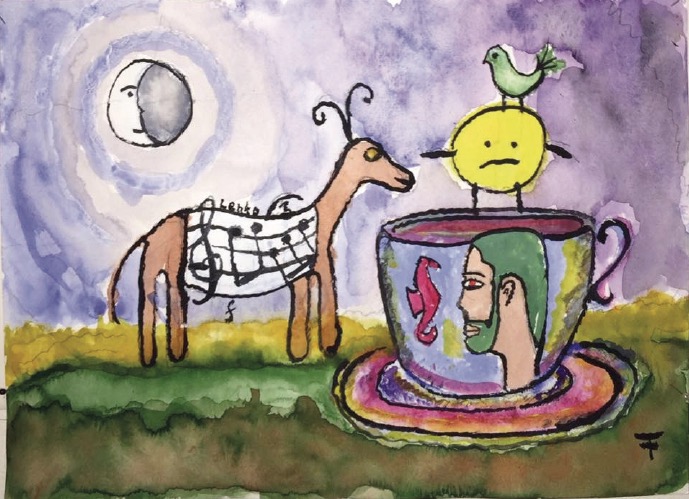 And it was deeply Jewish, he added. “At the heart of David’s music is one of the central concepts of Judaism, that redemption is a key to tikkun olam, the repair of a world that is damaged. His best works usually conclude on a rising tide of melody, a soaring wave of song that lifts the spirit, that inspires one to take up the cause of that repair, of restoring what was damaged in the Creation and in the subsequent errors of humanity….

“What I have come to realize, spurred more by David’s music than by an intellectual process, is that tikkun olam has a profoundly fundamental spiritual element, that redemption begins and ends with our relationship with the Ineffable. David’s gift as a creator was to make that connection explicit, audible and very singable. And in the other sense of the word, his art was a gift to all of us.”

At the funeral, Rabbi Mlotek quoted one of Mr. Feinberg’s songs. “I love you more than the sun loves the summer. Like the wind loves the willows down the lane. And I need you, like a baby needs his mother. Like a love song needs a gentle refrain.”

Who: The Mlotek family — Zalmen and his children, Avram, Elisha and Sarah remember their friend David Feinberg

What: A Father’s Day concert featuring David Feinberg’s music on his shloshim

Where: On Rabbi Avram Mlotek’s Facebook page; or go to
REBRAND.LY/SONGSOFDAVID