Josef Gluck speaks to reporters the day after the attack in Monsey on December 29, 2019. (Ben Sales)

Joseph Gluck was the one bright spot in a series of horrible weeks that began with murderous rifle fire in Jersey City, included several assaults in Brooklyn, and concluded with a machete attack on a Chanukah party in Monsey that left one man critically injured.

When Grafton Thomas invaded Rabbi Chaim Rottenberg’s house the Saturday night of Chanukah, Mr. Gluck, who was there, helped a child escape out the back.

Then he returned to the scene of the carnage and threw a coffee table at the assailant.

Then Mr. Gluck chased Mr. Thomas out of the house, followed him as he escaped into his car, and captured his license plate as he drove away.

Mr. Gluck gave the license number to the police in Monsey, who notified the police in New York, who tracked Mr. Grafton’s car as it crossed the George Washington Bridge and arrested him soon afterward.

On Thursday, Mr. Gluck was scheduled to receive a $20,000 award from the Jewish Federation and Foundation of Rockland and the Anti-Defamation League for giving the information that led to Mr. Grafton’s arrest.

“We offered the reward within an hour of the crime,” Gary Siepser, the federation’s CEO, said, although as it turned out Mr. Gluck already had provided the information leading to the arrest, and he did not do it for the reward. “The only reason there was such a quick arrest was because of Mr. Gluck’s providing that information.”

Mr. Thomas pleaded not guilty to 10 hate-crime charges filed in federal court. He also pleaded not guilty after a grand jury in Rockland County charged him with six counts of attempted murder and several assault and burglary counts. His attorney argues that he is mentally ill and incompetent to stand trial.

Mr. Siepser said that the ADL does not expect the case to go to trial due to Mr. Thomas’ mental condition. “There will not be a day in court,” he said. Therefore, the terms of the reward — providing information leading to the arrest and conviction of the perpetrator — was satisfied, he said.

Mr. Siepser said the federation stepped up quickly to offer the reward because “there have been a number of incidents in the last two or three years where no suspect was ever arrested. We felt this was such a horrific thing that we needed to make a statement and make an offer of a reward in hope that somebody would come forward. And that did happen.” 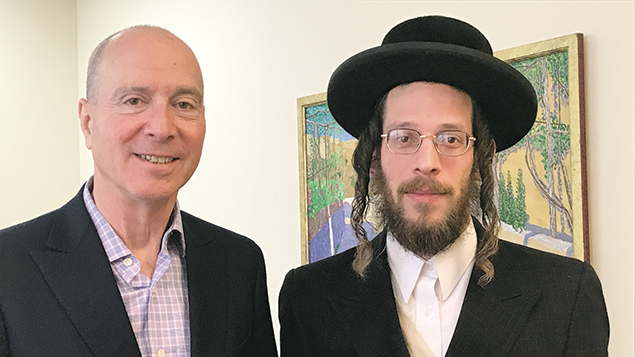 “Rewards work,” Alexander Rosemberg said, even though in this case it was superfluous. Mr. Rosemberg is director of community relations for ADL’s New York/New Jersey region. “They not only create the incentive for people in the community to come forward, they also create awareness in the general population that something grave occurred.”

Mr. Rosenberg said that Mr. Gluck “is pretty special. He made it possible for the bloodshed to go no further than it did. He had the quick instincts to run out to take the license plate and give it to the police.

“It’s unusual to have someone with that sort of quick response mechanism. It’s not always the case. Sometimes we have people who suffer assaults themselves and don’t know how to describe the individuals who assaulted them.”

So what about the individuals who murdered and attacked Jews late last year in Monsey and Jersey City and Brooklyn?

“Each event is different,” Mr. Rosemberg said. “The intentions and ideologies behind each is different. But one thing that binds all these incidents is hate. Whether the person is mentally stable or not stable, there’s an element that makes a person go after somebody else for no other reason that what the person is or what they stand for.”

Mr. Rosemberg said a poll the ADL released last week showed that 11 percent of Americans have anti-Semitic attitudes — a typical response for that survey. “The highest we’ve gone since the 1960s is 14 percent. There aren’t any more people now hating Jews or having anti-Semitic attitudes; they’re just more willing to go out there and perpetrate them.”

He said the ADL’s numbers of actual incidents “has been climbing steadily for a long time. The number of assaults nationwide went from 11 to 17 from 2017 to 2019; we’ll probably see a similar climb in 2019, if not more. The sheer number of incidents, the number of vandalisms, have doubled in the last five years. Certainly if you think about the last 18 months, where you had three deadly attacks on the Jewish population — in Pittsburgh, Poway, and Jersey City — and one in Monsey that had the potential to become deadly, and the sheer proximity and frequency of the assaults in the last few months in and around Chaunukah, it’s shocking. It is not something one should get used to.”

So why the increase in anti-Semitic acts?

“You have rhetoric on the national spectrum — from the left to the right — that has taken the gloves off and is using sort of a rhetoric that is going to be extreme. Ordinary citizens hear that and think there is a certain degree of permissiveness to go and do what they will. Part of the reason is rhetoric that trickles down through social media and comes down to everyday Americans and then ends up radicalizing individuals to go out and do things.

So what should we be doing about it?

“Get social media companies to abide by their own terms and conditions,” Mr. Rosemberg said. “If they’re going to say they’ll take down hateful posts, they should do that. If they say they’re not going to allow certain posts, they should do that.” The ADL has a center in Silicon Valley that works with the social media companies on the issue. Among the ADL’s concerns: Facebook groups organized in Rockland County and Ocean County to oppose the growth of Orthodox communities. “We are bringing to the attention of social media companies how harmful these groups can be, with the hopes they be shut down,” he said. “A lot of the people in these groups have become incredibly sophisticated in not breaking the law, even when what they say might be incredibly hateful and might be driving other people to be radicalized.”

In addition to the ADL’s center, “we also have a large number of interested people who are constantly on top of this. We would ask everyone to flag the hateful content they see out there. The help of every single individual is needed to become an ally against hate.

“If you see someone in the street who is yelling a slur at somebody else, you would definitely stop that person,” Mr. Rosemberg said. “That’s the only way it doesn’t escalate — if you check it, no matter where it may come from. It’s up to every individual to become an ally in the fight against hate. If you see something, say something.”