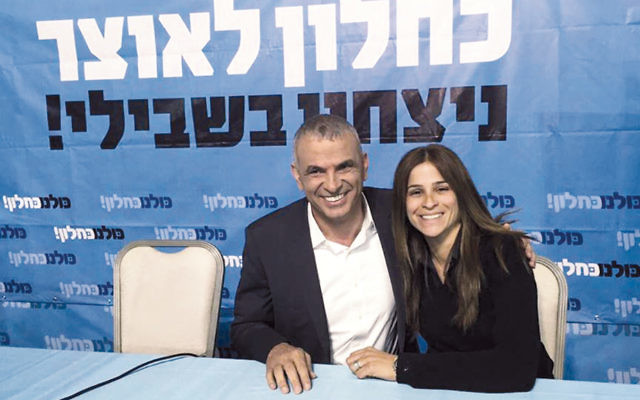 TEL AVIV — Israeli lawmaker Merav Ben-Ami is pregnant, and everyone knows it.

As Ben-Ami headed into an interview here on Thursday, an Orthodox Jewish woman stopped her to offer congratulations. The woman said that her 38-year-old sister was considering in vitro fertilization, too. Speaking as though to an old friend, Ben-Ami said she hoped her story would encourage the sister.

Ben-Ami, 40, has had many such encounters since she revealed the story of her pregnancy in last weekend’s edition of the Israeli daily Yediot Acharonot. This is the story — Ben-Ami, a Knesset member representing the centrist Kulanu party, is having a baby with her gay friend.

“I don’t want to set off a rumor mill, with people wondering how a single woman at the Knesset is suddenly pregnant,” Ben-Air told Yediot. “So I’m saying it outright: I’m pregnant and everything’s all right. I’m not the first MK to get pregnant, but I am the first single MK to get pregnant by a gay friend without getting married.”

Ben-Ami was nervous about announcing her unconventional pregnancy, but she said the reaction has been overwhelmingly positive. The nation’s celebration of childbearing seems to have trumped, or at least tempered, any discomfort with Ben-Ami’s nontraditional choice of family, even among the Orthodox.

“It’s not easy here because most people know how a family is supposed to look: a mother, a father and children who live together,” Ben-Ami said. “But that woman who approached me is not the first, even today. I got really, really good comments about the article, from politicians, from people I know, from people I don’t know.”

In Israel, the biblical exhortation to “Be fruitful and multiply” is amplified by a national emphasis on maintaining a Jewish majority, replacing Jews lost in the Holocaust, and the general precariousness of life in the shadow of war and terrorism. Israel is the only country that pays for infertile couples to have two babies with IVF, and mothers are entitled to 14 weeks paid maternity leave. Fathers can take the time in place of their wives, or they can take five paid days along with them.

Ben-Ami always planned to marry and have a baby, like a good Israeli. But she was busy.

She first came to the country’s attention in 2005, when she won the reality show “Needed: A Leader.” With the 5 million shekels ($1.3 million) in prize money, she set up a chain of centers for at-risk youth in the central cities of Netanya and Herzliya, which she ran until being elected to the Tel Aviv City Council in 2013. In 2015, she talked her way into a spot on the list for the new Kulanu party, and she was elected to the Knesset, Israel’s parliament.

“Also, I wanted to see the world,” she said. “I went abroad every summer for one month, sometimes two. I went to the Philippines, to Vietnam. It was more interesting than to sit here and wait to maybe go on a date. I was more focused on myself, on my career, on my hobbies — I admit — on my life.

At 38, single and poised to enter national politics, Ben-Ami realized she might be running out of time to have a baby. A conversation with her mother helped convince her to move ahead with IVF. She and her close friend Ofir agreed in writing to try to have a baby together, and to raise the baby as a team. Ofir, a 41-year-old finance manager, lives down the block from Ben-Ami in this city and is in a relationship with another man. Ben-Ami plans to continue looking for love.

A few months ago, on her third round of IVF in two years, Ben-Ami learned that she finally was pregnant. After consulting with people she trusted, including Kulanu’s leader, Finance Minister Moshe Kahlon, she decided to go public with her story to “take control of the message,” as she put it.

Just before the Yediot interview was published, Ben-Ami had second thoughts, but reminded herself that she was in no position to hide her pregnancy. Although she still fits into her jeans and fitted black top, the lawmaker will be five months pregnant when the Knesset’s winter session starts at the end of this month.

Outgoing and direct, Ben-Ami said she believes public officials have an obligation to “let people know who you are,” and she wanted to set an example for Israeli women. After all, her work in the Knesset, where she is a member of seven committees and has sponsored six bills that became law, is focused on social welfare.

“When you are single in Israel after 30, people start to wonder what is wrong with you,” she said. “They don’t understand. I really want to inspire women not to be afraid of taking this step. I think Israel is already changing, especially here in Tel Aviv. I’m surrounded by single mothers.”

Alexandra Kalev, a sociology professor at Tel Aviv University, said that although Israelis are relatively conservative, they are not as wedded to the idea of the traditional family as are people in countries like the United States.

“There’s way more tolerance of different types of families,” she said. “What’s most important is that family serve the Zionist value of procreating.”

Still, Kalev said, Ben-Ami’s announcement sent a powerful message that women can define their own reality. It is even more significant coming from a woman of Middle Eastern origin, as Mizrahi Jews are seen as more traditional and have historically faced discrimination in Israel, she added. While Israel has a proud tradition of gender equality, dating back to the pre-state militias and kibbutzim, women historically have been excluded from shaping the institutions of power.

“Merav’s story is a reminder that the kind of commitment that work requires too often comes at the expense of having a family, and that’s one reason we don’t see more women in leadership,” she said. “She is sending an important message that women have the right to a family however they want it, even if that means breaking the traditional categories.”

So far, Israelis have been supportive. Ben-Ami said she has been flooded with congratulatory messages and phone calls in the past week. Her Facebook post about the article has some 1,500 likes and hundreds of gushing comments. Ben-Ami said that her colleagues in the Knesset, including some from charedi Orthodox and Arab parties, have congratulated her privately

“There are very liberal charedim,” she said. “There are different streams. And there’s a lot of difference of opinion there.”

Rabbi Yuval Cherlow, a prominent moderate among religious Zionists, said that most Orthodox rabbis would not support Ben-Ami’s decision to have a baby outside a Jewish marriage. If a woman is worried about not getting married in time to have a baby, the standard advice is to freeze your eggs, he said. That is the policy of the Puah Institute, a Jerusalem center that advises infertile couples based on Jewish law, or halachah.

On the other hand, Judaism is very understanding of a woman’s need to have babies, Cherlow said. In the Torah, the Jewish matriarch Rachel tells her husband, Jacob, to give her a baby or she will die. Rabbis draw on the Bible’s emphasis on fertility to craft fairly liberal positions on assisted reproductive technology.

Cherlow said he is among a minority of Orthodox rabbis who recommend that older single women try IVF, partly because frozen eggs are known not to be a reliable option for them. From the perspective of Jewish law, he said, it is a positive that Ben-Ami’s baby will have a father.

The Orthodox consider homosexuality incompatible with Judaism, although public attitudes were seen to shift after a charedi Orthodox man stabbed a teenage girl to death at the 2014 Jerusalem Gay Pride Parade. But the fact that Ofir is gay is irrelevant to his being a father, according to Cherlow.

“I would prefer like every rabbi in the world that babies would be part of a Jewish family according to halachah,” he said. “But she made the decision not to miss being a mother, and the baby’s father is known and will be involved. These are positive things.”

Now that Ben-Ami has made her announcement, she is ready to get back to work. At the end of the day, she said, she is just another expecting Israeli mother.

“You look around and every third or fourth woman is pregnant. So you need to take it in proportion,” she said. “From a Jewish point of view, the baby is the important thing, even if it’s from a gay man, even if you’re 40. Of course we’d prefer this or that, but yalla, we can’t wait forever.”