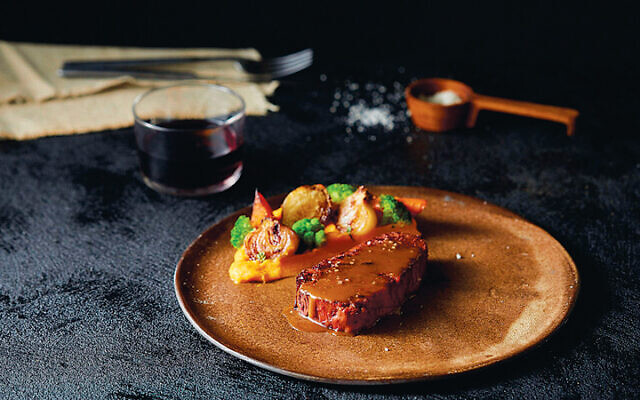 Larry Niven set his 1966 science fiction novel “World of Ptavvs” in the year 2109. One of the main characters is Larry Greenberg. “His parents were Orthodox,” Niven writes, “but they weren’t millionaires, they couldn’t afford a fully kosher diet.”

The unstated assumption: The high cost of kosher meat was only going to soar further in the future.

But that’s not how the kosher diet of the future is shaping up. A century now, meat in general may be rare for environmental reasons, if not banned for ethical reasons, but 21st century food scientists are hard at work at vegetable substitutes. And in good news for those who want rabbinic supervision on the food that goes into their mouths, Israel is shaping up as a leading center of development of so-called “clean meat.”

The latest good news on that front comes from Redefine Meat, an Israeli start-up that announced last week that it would begin testing its vegan steaks in high-end restaurants before attempting more large-scale distribution.

The company makes what it calls Alt-Steak with industrial-scale 3-D food printers, using its plant-based formulations. By printing with many materials, Redefine says it can create “sustainable, high-protein, no-cholesterol steaks that look, cook, and taste like beef.” The product has a 95 percent smaller environmental impact than actual beef, the Rehovot-based company says.

Redefine plans to sell its 3-D meat printers and alt-meat formulations to restaurants beginning in 2021. The restaurants can print steaks to be softer or harder, or juicier or with less fat, for example.

Redefine, based in Rehovot in central Israel, says on its website that its products “are designed to appeal to the world’s hundreds of millions of ‘flexitarians’ or ‘conscious carnivores’ who seek to reduce their meat consumption, often as part of their personal sustainability efforts.”

In the relatively near term, Redefine sees a $140 billion market for its sort of high-tech meat substitutes. Looking ahead a couple of generations, this means the current high cost of kosher dining may well come down. Of course, in the novel, Larry Greenberg had bigger problems than Jewish dining laws, namely being taken over by a telepathic alien. But that’s a different story.