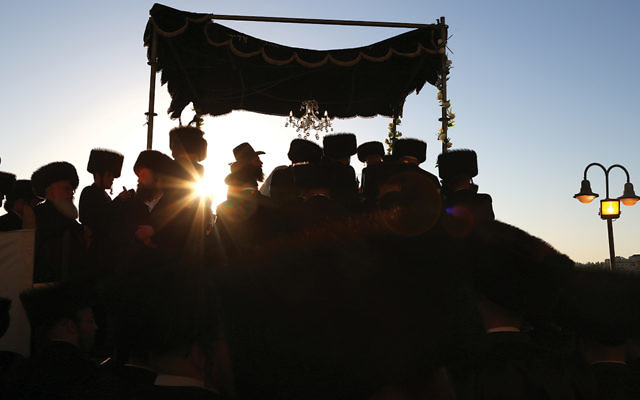 Chasidic men celebrate a wedding in Israel, where marriage and divorce are legally under the authority of the Orthodox chief rabbinate. (Yaakov Lederman/Flash90)

Israel’s Supreme Rabbinical Court this month sentenced a charedi Orthodox man to 30 days in jail for pressuring his son to withhold a divorce from his wife for more than a decade. By upholding a lower rabbinical court decision, the high court gave its blessing to an unprecedented approach to freeing women from unwanted marriages.

The Orthodox rabbis who adjudicate divorce in Israel — all of whom are men — have come under fire in recent years for not doing enough on behalf of such women, commonly called “chained women,” or “agunot” in Hebrew. In response to mounting public pressure, and due to an influx of new judges — selected in a process that includes more women than ever before — rabbinical courts appear to be edging toward more aggressive action against husbands who refuse to give their wife a “get,” or Jewish divorce.

“I believe and hope that a new spirit of caring and understanding of the woman’s position as a victim of get refusal and as an agunah is spreading throughout the entire system,” Rachel Levmore, a rabbinical court advocate who provides legal counsel to chained women, said.

Levmore directs the Agunah & Get-Refusal Prevention Project at the International Young Israel Movement and the Jewish Agency for Israel.

“As the old guard are replaced, many of the new appointments are much more in touch with the reality of Israeli society and the standing of women within Israeli society as a whole and within Jewish law specifically,” she said.

“There are more new judges in the rabbinical court and they bring a new attitude,” Doron said. “There is a stronger attitude toward those who refuse to give a get in the last few years, so that’s the reason there is more punishment.”

As part of a system dating back to the Ottomans, Jews in Israel must marry and divorce through state rabbis, whose decisions are based on civil as well as Jewish law — halacha. Divorce is handled by regional rabbinical courts and the Supreme Rabbinical Court.

Women who are not granted a divorce cannot remarry under halacha and often are shunned by the charedi community. Any children they might have with another partner are allowed to marry only other “illegitimate” children in Israel, as are generations of their descendants. By contrast, the offspring of a recalcitrant husband and another woman are considered legitimate, and generally are able to move on with their lives. This gives the husbands much more power than their wives when it comes to divorce.

The plight of chained women has made headlines in Israel and abroad in recent years, as women’s rights and religious groups, many of them led by religious Zionist women, have worked to highlight the issue and push for change. Activists on behalf of chained women say that changing public attitudes have encouraged harsher action by rabbinical courts against recalcitrant husbands.

“More and more pressure is being put on the rabbinical courts to adopt a friendlier approach to interpretation” of Jewish law, Yedidia Stern, a researcher at the Israel Democracy Institute think tank who seeks solutions to the problem of chained women, said. “What is interesting to me is the spearhead [of the movement to reform agunot law in Israel] is religious women in Israel. Most activists are [modern] Orthodox religious women, and they are basically expressing some kind of moderate feminist approach to halacha.

“Partly as a result, we see lately more and more cases where very well-known rabbis in the rabbinical court system in Israel are willing to step forward and to help those women who are being refused by their husband to get a get.”

In the case of the father who was sentenced to jail time — and fined some $40,000 — media reports have highlighted that his daughter-in-law suffered a debilitating stroke in 2005 during a family vacation to Israel from New York. The son, who comes from a wealthy and influential chasidic family, then abandoned his wife and their two children, refusing a divorce for 11 years, even after the rabbinical court ordered him to grant one. None of the family members’ names have been made public.

An injunction preventing the father from leaving Israel was issued earlier this year, when the father was in the country on a family visit. He is now in Israel, and the injunction will remain in force pending a final decision on his case.

The Tel Aviv Rabbinical Court, which sentenced the father, called it “one of the harshest cases of ‘igun’ [‘chained’ to a recalcitrant husband] the rabbinical court system has ever had to deal with,” according to Haaretz.

“All these cases are not easy for the woman, but this case is especially powerful,” the chained woman’s attorney, Aviad Hacohen, dean of the Academic Center of Law and Science in Hod Hasharon, said. “She is really miserable. She just wants to be a free woman.

“I can’t find any reason why her husband is refusing. It’s pure cruelty.”

The father’s attorney, Eliad Shraga, did not respond to a request for comment. But his office told Haaretz in March that divorce refusal is “unacceptable” and “must be eradicated.”

“At the same time, it seems that the court floundered and decided to fix a wrong with a wrong, choosing to mistreat the elderly father rather than punish the recalcitrant son,” the office said.

Shraga has appealed the father’s sentence to Israel’s Supreme Court, where Hacohen is representing the daughter-in-law.

Also last month, the Israeli media reported that the Supreme Rabbinical Court sentenced a recalcitrant husband to five years in jail for adamantly refusing to give his wife a divorce.

As the public discourse about chained women has changed, so have the rabbinical courts. About a third of the roughly 100 judges serving on the courts were appointed in the past year, following a nearly decade-long freeze on new appointments. That includes 22 new regional court judges and all 10 of the full-time judges on the Supreme Rabbinical Court.

The new judges look somewhat different than their predecessors. In the past, judges overwhelmingly were charedi. Only one, the Tel Aviv court judge who ruled against the father, held an academic degree, and few judges in the regional courts and none in the high court had served in the Israel Defense Forces.

Among the new regional court judges, eight are rabbis from the religious Zionist movements, sometimes known as modern Orthodoxy, who tend to be more egalitarian in their interpretation of Jewish law than charedi, or fervently religious, rabbis. Three have academic degrees, including one doctorate, and seven served in army combat units. Five of the Supreme Rabbinical Court judges served in the army.

But Rabbi David Stav, a prominent religious Zionist rabbi, said the problem of chained women is only getting worse in Israel. He said prenuptial agreements — like the increasingly popular version offered by his religious services group, Tzohar, but opposed by much of Israel’s religious establishment — are the only realistic solution.

“We should understand that what has been done so far is not solving the problem from its roots. We cannot not get to the point of helping the women two or three years after the story has begun. We have to understand that this time is a tragedy for the agunah,” he said.

No one knows how many chained women there are in Israel. Estimates range from hundreds to thousands. A handful of recalcitrant husbands sit in prison at any given time. According to partial numbers provided by the rabbinical courts, sanctions ordered by judges jumped to 168 in 2013, from an annual average of about 60 over the previous 12 years, but incarcerations stayed about the same, at 19. Judges can send recalcitrant husbands to jail for up to five years and renew the sentence indefinitely.

Short of incarceration, rabbinical courts can revoke state-issued licenses and personal credit cards, levy fines, and forbid other Jews to interact with recalcitrant husbands. In one case, the courts even backed the internet shaming of a recalcitrant husband. Rabbinical judges historically have been hesitant to go too far with such tactics because Jewish law requires that divorce must be granted voluntarily to be valid. Where to draw the line is matter of debate among scholars of Jewish law.

But more women than ever are now helping to draw that line, albeit indirectly, since Orthodox rabbis, from whose ranks rabbinical judges are drawn, must be men. After decades of male dominance, the 11-member Rabbinic Judges Appointments Committee that selected the new rabbinical judges had four female members, thanks to a 2013 law requiring it. The law itself was forced by a 2011 Supreme Court ruling on a petition by the women’s rights group Emunah that froze the committee’s work until women were added.

(In January, the High Court of Justice ruled that women must be allowed to contend for the position of rabbinical courts director.)

Levmore, who is also an activist for chained women and wrote her doctorate and influential academic work on the issue, said she saw firsthand how having women on the committee impacted the applicants and the appointment process. She interviewed all the applicants at length, and said the discussions changed the thinking of many of them, as well as of the committee.

Last week, Levmore was able to pat herself on the back after the panel of three Supreme Rabbinical Court judges she had interviewed and appointed issued what she called a “stunning” 47-page ruling upholding the jail sentence of the father of the recalcitrant husband.