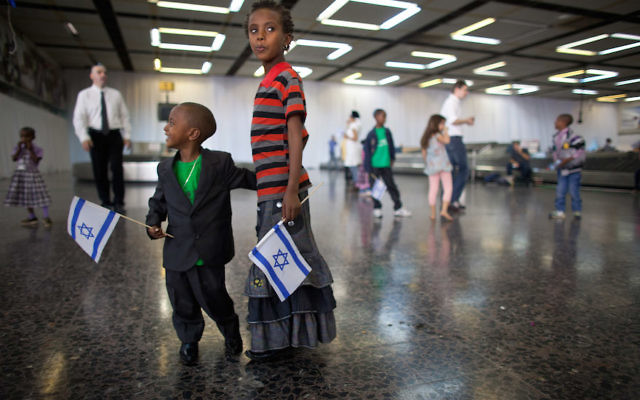 A group of Ethiopians who claim Jewish descent will arrive in Israel on Sunday, fulfilling a promise that was first approved by Israel in 2013 but put on hold due to budgetary constraints.

The 78 Ethiopians, known as Falash Mura, are among a community of 9,000 who have been waiting in the African country for Israel to end its budget impasse.

“The tickets are bought, the absorption centers are ready, and we’re going to welcome them with open arms on Sunday,” said Nimrod Sabbah, a spokesman for Likud lawmaker David Amsalem.

The Interior Ministry in 2013 approved the immigration of the Falash Mura. The Knesset unanimously approved a plan in November 2015 to bring the remaining 9,000 Ethiopians following a public campaign launched by the Ethiopian community in Israel and volunteer organizations. The plan did not deal with the finances, which include the long-term costs of acclimating the immigrants.

An agreement to find money in the budget for the aliyah of the Falash Mura was signed in April, avoiding a government crisis, after Amsalem and another Likud lawmaker boycotted voting in the Knesset over the dispute.

The Falash Mura claim links to descendants of Jews who converted to Christianity generations ago but now seek to return to Judaism. The Interior Ministry accepts them as immigrants under the Law of Return, which is less restrictive than halachah, or traditional Jewish law.

Ethiopia has been experiencing violent anti-government protests since last November, resulting in over 500 deaths, according to Human Rights Watch. Some of the clashes have occurred in the country’s Amhara region, which is home to most of the Falash Mura.

Following Sunday’s arrivals, remaining Falash Mura are expected to move to Israel starting in November, with about 100 people arriving each month, according to The Times of Israel.

About 135,000 Jews of Ethiopian descent are living in Israel. Some 22,000 Ethiopian Jews were airlifted to Israel during Operation Moses in 1984 and Operation Solomon in 1991.