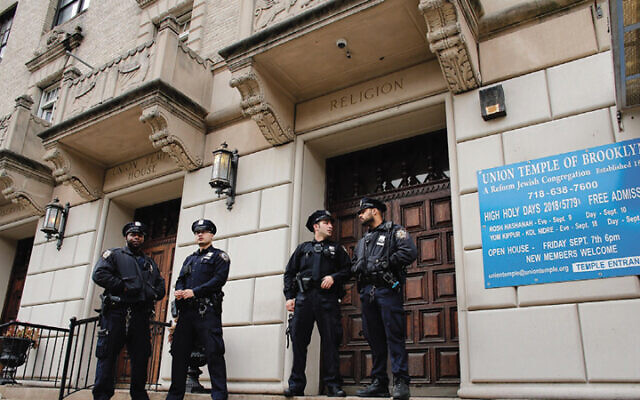 New York police officers stand guard at the door of the Union Temple of Brooklyn after it was vandalized with graffiti on November 2, 2018. (Kena Betancur/AFP via Getty Images)

hen Rabbi Capers Funnye attends a synagogue that’s not his own, he must brace himself for the reaction that he knows will follow after he walks through the door.

Even though he comes in wearing a kippah and holding a tallit, Funnye knows that if a security guard or police officer is there, he’ll probably face extensive questioning because he’s African-American.

“They need to do whatever they’re most comfortable with,” said Funnye, the rabbi at Beth Shalom B’nai Zaken Ethiopian Hebrew Congregation in Chicago, about security practices at other synagogues. But, he added, “If I go to a synagogue where I’m not a guest speaker and they don’t have my picture and have it advertised, I would be very uncomfortable going into a synagogue with armed policemen.”

Interactions between armed police and black Americans have spurred a nationwide protest movement since the death of George Floyd, an African-American man, in police custody in Minneapolis in late May. The movement has put synagogues and other Jewish institutions in a challenging position: They are inclined to stand with the protest movement, but they also have built close ties with law enforcement amid rising anti-Semitism, including deadly attacks on Jews in Pittsburgh; Poway, California; and Jersey City.

“They feel protected and I understand that,” said Tamar Manasseh, an African-American rabbinical student and anti-gun violence activist in Chicago, referring to white Jews. “It’s not their fault that they feel protected. We just don’t. I think the most important thing is for them to be sensitive to that, for them to be aware of that.”

She added: “Some of the people you’re being protected from are actually people you call friends.”

Jewish organizations have a history of working closely with law enforcement, and many see police as friend rather than foe. Jewish leaders have been grateful for officers’ quick response to anti-Semitic attacks, and consistently recommend to local synagogues and other institutions that they build close relationships with the police.

“There is prejudice, there is bias within police forces. We need to deal with it,” said Abraham Foxman of Bergen County, the former longtime national director of the Anti-Defamation League, who established and expanded many of its law enforcement programs.

Foxman said that he supports increased police transparency and accountability, “but at the end of the day, the African-American community will need the same protection as we do.”

The ADL is one organization that has tried to straddle the divide. The group has a long record of working for civil rights and has expressed solidarity with the protests. It has called for aggressive legislation against police brutality. It organized a Shabbat dedicated to anti-racism.

But the ADL appears to be far from backing calls to defund the police, one demand of the protest movement that is gaining traction. A photo of two police officers graces the cover of the ADL’s guide titled “Protecting Your Jewish Institution,” which recommends engaging with police and other law enforcement dozens of times.

“Get to know local law enforcement and get them to know you before there is a problem,” the guide says. “Invite local police officers to use your gym, to join you for an oneg Shabbat or just to visit your building and get to know it.”

The principal organization tasked with coordinating protection for Jewish institutions is the Secure Community Network, or SCN, which was created in 2004 by two national coalitions of Jewish organizations. SCN also sees law enforcement as the first address, and one of the main tools for synagogues, schools, and community centers to turn to when devising a security plan. Its current and past CEOs both come from long careers in law enforcement.

SCN often recommends being in touch with the local police department as one of the first steps in any security plan. In a report issued this year about whether synagogues should hire armed guards — a step SCN did not necessarily recommend, and called “not a security strategy or plan on its own” — the group said the best option is to have an on-duty police officer present. The group credits law enforcement for preventing further bloodshed in Pittsburgh, Poway, and Jersey City.

Its CEO, Michael Masters, is a former Department of Homeland Security official in the Chicago area. Masters said he supports efforts to increase police accountability and transparency in ways that make black Americans safer, though he did not go into further detail.

He said the Jewish community should take advantage of its relationships with law enforcement to help make that happen while also being more inclusive of Jews of color.

“We have had a perhaps more successful relationship with law enforcement than other communities, and if there are things to learn from that or ways we can leverage that to effectuate meaningful change, that will benefit other communities,” he said. “It’s also important for us to recognize as a community that we’re not monolithic. We have incredible diversity in the Jewish community.”

But Masters stressed that anti-Semitic attacks remain a present threat and that police are a key partner in preventing it. “A very real, very deadly and likely more active threat against our community exists,” he said. “If we recognize all that and accept that we need to ensure the safety and security of the community and the people who walk into our institutions, but there are issues with the organizations that provide some of those services, then we have a responsibility to work with those organizations and institutions … to address and correct them.”

The ADL also plays a role in educating police against extremism and prejudice. The group says it’s the largest nongovernmental trainer of law enforcement in the country and has trained 150,000 personnel. Some of the training is on counterterrorism, but many of the programs focus on how to recognize hate crimes and fight implicit bias.

One program takes officers to the U.S. Holocaust Museum in Washington, D.C., to show them how local police during the genocide carried out racist and genocidal policies. The ADL’s Center on Extremism has provided intelligence on extremists to the FBI that has helped lead to arrests.

Current ADL officials declined to be interviewed for this article, but the organization did provide a statement from its CEO, Jonathan Greenblatt.

“There’s important, deep, systemic work that needs to happen within law enforcement to rebuild trust and prevent tragedies like the murder of George Floyd or Breonna Taylor,” he said. Greenblatt added that the ADL is advocating “for investments in meaningful police reform and broader efforts to address institutional racism in the criminal justice system.”

While many recognize the need that Jews feel for security in the wake of anti-Semitic attacks, advocates for structural police reform say that physical protection must come with extensive conversations and training to ensure that security measures don’t exclude Jews of color.

Funnye said that his synagogue, on Chicago’s South Side, is in touch with police, but relies principally on a network of close relationships across the neighborhood to create a feeling of security.

Security “can’t come at the expense of black Jews or other black people,” said Matt Nosanchuk, a former Obama administration liaison to the Jewish community who now heads the New York Jewish Agenda, a progressive advocacy group that supports legislation to reform police.

“We need to take a hard look at these relationships and … if we are partnering with law enforcement organizations, we need to make sure that they are observing policies and practices and training that does not turn them into an agent of systemic racism in our country,” he said.

Some Jewish activists have joined the call to defund the police. For Jews for Racial and Economic Justice, a New York City group, that means a demand to reduce the $6 billion NYPD budget by at least $1 billion.

Leo Ferguson, a black Jewish organizer with the group, says he personally thinks New York City does need an armed municipal security force, but it should be much smaller than what exists now. And he hopes that synagogues will start building alliances with other vulnerable groups in their neighborhoods to provide mutual alliances and security rather than be under armed guard.

“The most powerful thing we can do for the safety of the Jewish community is build solidarity and much stronger relationships with other communities that face white nationalism and violence and hate violence,” Ferguson said. “Building allies rather than doubling down on tensions — that’s going to pay long-term dividends in a way that having a cop car parked outside of your synagogue never will.”

Carin Mrotz, a Jewish activist in Minneapolis who supported that city’s recent vote to disband the police department, said that white Jews may look to police for protection because of a deep-seated — and justified — fear of anti-Semitism. But she hopes that Jewish institutions can think beyond self-defense to “dream what else is possible beyond what we have right now.”

“Part of this is about whiteness and comfort with law enforcement, and part of it is historical, generational trauma and our response to fear which is real,” said Mrotz, the executive director of the social justice group Jewish Community Action. “Our fear is often triggered by these attacks, which makes it hard to really dream or focus on the potential for a different world.”