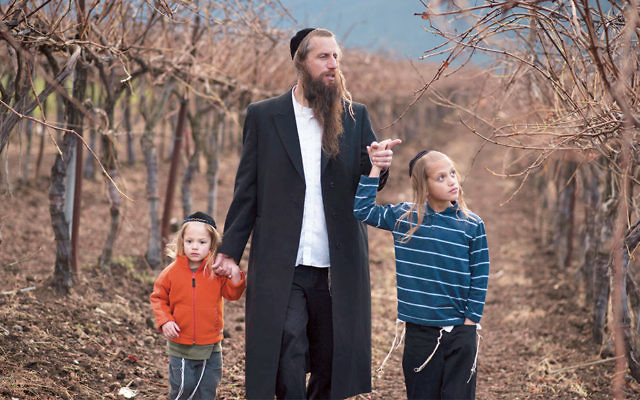 Israeli farmer Ira Zimerman and his children are in his vineyard. He harvests grapes to serve a large local winery. (The Smith Fund)

Avichai Koch says farming is in his blood.

His parents, both Holocaust survivors, came from Europe to an Israeli moshav near Tel Aviv, where they worked the land, grew olives, herded cattle, and sold chickens until their recent retirement.

Today, the family tradition lives on at Koch Farm on Moshav Tekuma, four miles from the Gaza Strip. There, Koch erected a series of handmade greenhouses, where he grows everything from cherry tomatoes, cucumbers, eggplant, radishes, and scallions to herbs and mangoes.

At this time of year, Sukkot (known as Chag Ha-Asif or the Festival of Ingathering), he is reminded about just how tied his profession is to Jewish law and tradition.

“In Israel, farming is definitely Jewish,” Koch said. “Everything is tied to the Jewish calendar. Around Rosh Hashanah is pomegranate season and every Sukkot the etrogim” — the yellow citron fruit— “are ready. The seasons of the year are the seasons of the Torah. When I plant, I don’t say ‘by August,’ I base my growing seasons on the holidays.”

Farmers such as Koch, however, are becoming fewer and far between in Israel. In the last decade, internal economic challenges, reduced government investment in the agriculture industry, and external challenges such as the Boycott, Divestment and Sanctions movement have forced many family farmers to shut down or sell to larger farming corporations.

“You see many empty greenhouses in the Negev, their plastic coverings flying in the wind,” Koch said.

In 2015, the crop sectors lost about $265 million in revenue. The amount of vegetables sold dropped about 6 percent, while prices rose around 7 percent. In the same year, the Central Bureau of Statistics reported that household spending on agricultural products makes up just 7 percent of overall household expenditures.

Analysts say the challenges to the agricultural industry are due in part to a lack of investment by the government, which recently shifted from providing direct to indirect assistance. Further, while Israel is the start-up nation, it has invested much more heavily in advanced cyber, communication, and bio technologies than in water, solar energy or seed technology. This has left many farmers behind the times.

As farmers age — Koch says most farmers are in their 60s or older, like his father — their children are opting for other careers because “The business is very difficult.” Of his siblings, he is the only farmer.

Today, there are about 5,700 active farmers in Israel. That number was closer to 20,000 in the 1980s, according to Dave Matkowsky, founder of the Shmitah Fund, which provides financial assistance to Israeli farmers who observe a sabbatical year every seventh year as mandated by the Torah.

One of the main obstacles has been BDS, which has plagued many local farmers, Koch said. From about 2005 until 2013, Koch exported large pallets of food to European supermarkets. Then stores started paying less for Koch’s produce, and they reported difficulties in selling it.

“We have to label our products as grown in Israel,” Koch said. “One of the supermarkets told me that customers would see those labels and throw the products on the ground, making a big mess. Finally, the owners told me, ‘I cannot deal with this situation.’”

Matkowsky worries that a diminishing agricultural sector could put Israel in a situation of food insecurity. With BDS and Israel being in “a dangerous neighborhood,” he said Israel’s imports could be threatened.

“We want to make sure we can produce enough internally so nutrition doesn’t become an issue,” he said.

Farmer Ira Zimerman runs a grape vineyard near Meron in northern Israel, harvesting 7.4 acres of grapes to serve a large area winery. He awakes daily before 5:30 a.m., prays, and then tends to the fields until at least 4 p.m. If he has any energy left, he studies Torah.

The father of six young children, Zimerman said his kids spend their free time with him in the field.

“A guy who works as a farmer does not do it for the money. Farming is for the soul,” said Zimerman, who connects his work to his faith in God.

“The rain, wind, sun, temperature, humidity — there are so many things out of your control that you see the miracles,” he said. “For 2,000 years, the Jewish people wanted to be in Israel. Today, we have the benefit of coming back here. Now, we can take the land and do what God asked us to do with it, farm. I feel I am doing this for all of Am Yisrael” — the nation of Israel.