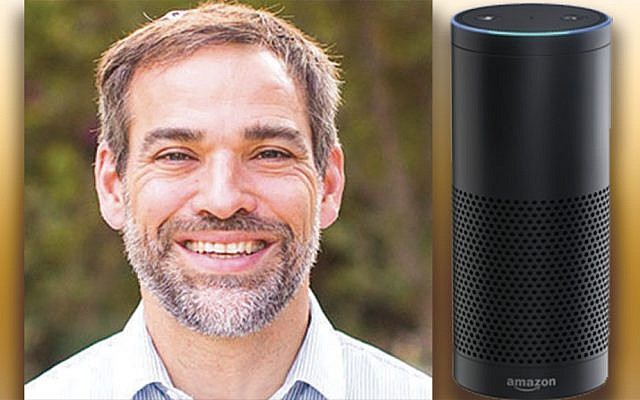 “Alexa, can I use you on Shabbat?” The journalist spoke into a small glass-and-metal device he held in his hand, which connected him to a distant supercomputer in a place known only as “the Cloud.”

It was not an unreasonable question to ask in the 21st century. Science and technology march on, and halacha — Jewish law — has to keep up. Talking into an invisible microphone wasn’t really the same thing as dialing a telephone dial and connecting a circuit across town — or was it?

It was, however, unreasonable to ask it of Alexa. In the year 2019, Alexa couldn’t provide a sensible answer to the question. For all that the previous paragraphs read like a short story by Isaac Asimov, or some other 20th-century science fiction writer, Amazon’s voice-controlled computer program hasn’t reached Star Trek levels of intelligence yet.

“Hmmm. I don’t know that one,” was all Alexa was able to offer.

(Asked the less abstract question of “What time is Shabbat,” Alexa provided an excerpt from Wikipedia: “Shabbat is observed from a few minutes before sunset on Friday evening until the appearance of three stars in the sky on Saturday night.”)

Truth be told, though, you don’t have to be a machine not to know the answer to that once science fictional, now eminently practical halachic question. It’s still an open question.

“We’re at a crossroads at this point in terms of halachic history,” is how Rabbi Yehuda Susman puts it. Rabbi Susman grew up in Teaneck and now heads Yeshivat Eretz HaTzvi in Jerusalem. On Sunday morning, he will speak at Teaneck’s Congregation Rinat Yisrael. His topic: “Alexa, Can I Use You On Shabbat? Thoughts on Shabbat in the Age of Artificial Intelligence.”

In addition to artificial intelligence, the questions of lab-grown meat and new medical advances are creating a confluence of halachic responses to technology “that are going to dwarf the type of issues that were dealt with 50 years ago,” he added

Rabbi Susman is an expert on those old 20th-century questions. In addition to rabbinic ordination from Yeshiva University and the Israeli rabbinate, Rabbi Susman has a master’s degree from Bar Ilan University in the legal methodology of Rabbi Moshe Feinstein, the premiere halachic decisor of 20th-century America.

As for the 21th-century questions, Rabbi Susman first encountered the Alexa conundrum a few years ago in a rabbinic chat group.

“It was when Alexa was something pretty new and exotic,” he said. “Someone at their Shabbat table was explaining how ‘With Alexa, I can say play Carlebach’ and suddenly Carlebach came pouring out of the speaker,” having mistaken the description for a direct command.

This sparked a lively back and forth on the chat group — and it piqued Rabbi Susman’s interest.

On Shabbat, can you interact with Alexa — or with a smart home — or with a real artificial intelligence? Must you actively avoid the machine ghost in the home on Shabbat?

“It’s an issue that’s only going to grow in intensity in the next few years, whether it’s a question of speaking to the machine, in terms of the network being aware and cognizant of what your likes and dislikes are, what your expectations when you walk into a room are,” he said. “We’re probably not too far away from when people are going to have chips inserted in and you will be directly wired into a network. There are issues that have to be addressed.”

“Theoretically, you can run away from it, say it’s all asur” — forbidden. “Not necessarily become a Luddite, but disconnect from certain aspects of technology. Today it’s not that hard not to have an Alexa in the house if you don’t want one. It’s not something I’ve seen the need for in my personal life. But maybe the first time I’ll get it I won’t understand how I managed without it, any more than I can imagine life before smartphones.”

The discussion has begun. “There have been articles written about it in Israel. The Zomet Institute in Jerusalem is very involved in trying to deal with these technological advances,” he said. “So far, it’s been looked at piecemeal. Asking if different devices, different gadgets, are a problem in terms of electricity on Shabbat. They’re dealing with the technical halachot — which are obviously very important — but without taking a look at the larger framework.”

“People have to be asking, what is the nature of Shabbat? How does Shabbat adapt — or does it need to adapt — to a culture where machine intelligence is commonplace? Does Shabbat need to adapt to a society where there’s more and more leisure time at people’s disposal? Should we be looking at the different devices only under the magnifying glass of what is permitted and prohibited in a very narrow technical sense, or should we be looking at what is beneficial for fostering an atmosphere of what we want Shabbat to be?”

Answers to these questions can come from two directions — top-down, through rabbinic leadership and education, and “also grassroots in terms of what a community’s sense is.”

Of course, the group of people who look to halacha to guide their Shabbat activities comprise more than one community. “There are multiple communities,” Rabbi Susman said. “There might be different branches of Orthodox around this question. Today, some people might not eat in other people’s homes because of practices like only drinking chalav yisrael,” milk that is supervised by a Jew from the time it left the cow. (One of Rabbi Feinstein’s most notable halachic rulings was his decision that in America, government regulation that prohibited the adulteration of cow milk meant that the formal supervision of chalav yisrael was not required. In contrast, his contemporary, the Lubavitcher Rebbe Menachem Mendel Schneerson, required the traditional supervision.)

With different kitchen standards, “it’s relatively easy to sidestep that and attain communal unity,” Rabbi Susman said. “If it’s a question of people not being willing to walk into other people’s homes on Shabbat because they don’t think their smart home is acceptable on Shabbat — that’s something that could create serious rifts in the community, and that’s a serious danger.”