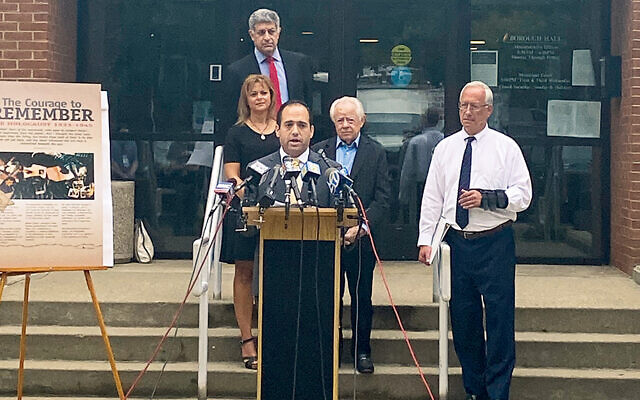 As Simon Wiesenthal Center’s eastern director Michael Cohen speaks, Tenafly Council member Jeff Grossman stands at the top of the steps, Holocaust survivor Mark Schonwetter and his daughter, Ann Arnold, are behind Mr. Cohen, and Tenafly Mayor Mark Zinna is at the right.

The Simon Wiesenthal Center is working with the Borough of Tenafly to help ensure Holocaust awareness in response to a school project that resulted in a report on Adolf Hitler earlier this year.

Last week, this education initiative was announced on the steps of Tenafly Borough Hall, in a press conference that featured the town’s mayor, Mark Zinna; members of the town’s council; Michael Cohen, the Weisenthal Center’s eastern director of the Simon Wiesenthal Center, and Holocaust survivor Mark Schonwetter.

The partnership aims to bring an understanding of the Holocaust to all segments of the Tenafly community through a variety of programs provided by the Simon Wiesenthal Center. In September, the borough will display one of the Center’s Holocaust exhibits, “Courage to Remember,” providng increased opportunities for public education on critical issues.

A community meeting featuring a conversation with Mr. Schonwetter has been scheduled for Monday, July 12, at 7:30 p.m. at Tenafly Borough Hall.

“We aim to convert a very concerning incident into a productive teaching moment,” Mr. Cohen said. “By bringing Holocaust survivor Mark Schonwetter to tell his story at a community event at Borough Hall followed by the display of the Center’s ‘Courage to Remember’ Holocaust exhibit, Tenafly is demonstrating that it is serious about Holocaust education. “

“I look forward to sharing my experiences with the Tenafly community and bringing us all together,” Mr. Schonwetter said. “I hope that my presence and story can spark a new age of compassion and understating. We have much work to do in ensuring Holocaust education, and I am proud to be a part of this initiative.”