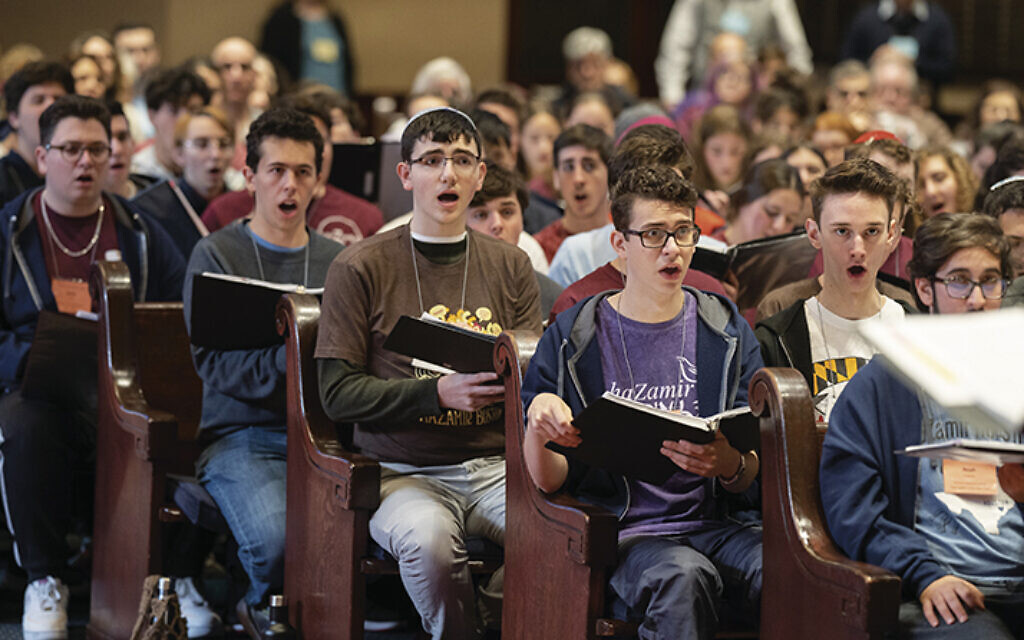 Ben Mitnick of Mahwah is just 16, yet he’s already learned that the more difficult pursuits in life can also be the most rewarding.

Now in his fourth year as a member of Ha-
Zamir: The International Jewish Teen Choir, Ben says the intensity of the experience is what drew him to it initially, and it’s what keeps him singing after all this time.

“I love singing, and the music that we perform is difficult and rewarding,” Ben said. “It’s so much fun to work through it every week with the amazing people in the choir. It may sound funny to say this, but I love rehearsals.”

He was one of 200 HaZamir members who took part in the two-day Winter Intervisitation retreat at Temple Emanu-El in Closter. The retreat culminated in an open rehearsal over the Martin Luther King Jr. holiday.

The retreat and rehearsal preceded HaZamir’s appearance in a sold-out concert on January 27 at Temple Emanu-El in Manhattan, marking the 75th anniversary of the liberation of Auschwitz. Such Jewish musical luminaries as Itzhak Perlman, Andy Statman, Tovah Feldshuh, Joel Grey, and the cast and orchestra of the Folksbiene’s Yiddish-language “Fiddler on the Roof,” including Musical Director Zalmen Mlotek of Teaneck, all were on the bill.

Ben has another major rehearsal to look forward to. In March, a four-day national HaZamir Festival will get the entire choir of 400 teenagers — 300 from the United States and 100 from Israel — pumped up for its annual gala concert, set for March 22 at Lincoln Center’s David Geffen Hall. 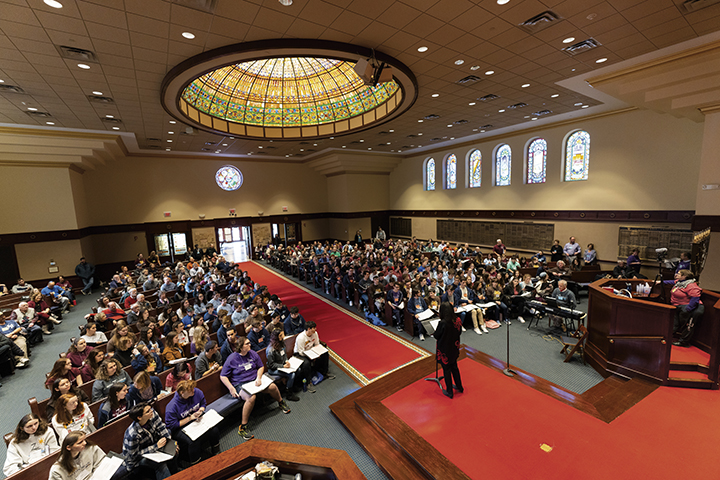 “We are the choir in residence for the annual Gathering of Remembrance for Holocaust Survivors,” Ms. Lazar explained. “The kids sing three numbers, some in Yiddish, and we bring in a survivor to talk to the children. We’ve been doing this for 15 years. Survivors always come up to us and say, ‘When we see you singing, we know that Hitler didn’t win.’”

Ms. Lazar defines HaZamir as “very Jewish and Zionist — but very pluralistic. We have boys with peyot sitting with boys who never had a bar mitzvah. We are all Jews.”

Ben, a junior at Bergen County Academies, is a member of the Bergen County chapter of the choir. Its 13 male and female members represent a mix of students from public schools and Jewish high schools.

They rehearse for two hours every Sunday at Congregation Beth Sholom in Teaneck, under the baton of resident music director Cantor Ronit Wolff Hanan, who co-founded the chapter in 2007 because her own daughter was involved in HaZamir and the nearest New Jersey chapter at the time was a 45-minute drive away.

“We have some kids for whom this is their only Jewish activity, and kids from Orthodox day schools, and everything in between,” Ms. Hanan said.

The repertoire HaZamir sings is similarly varied and eclectic. There are pieces from the 1800s and contemporary works by new Jewish composers. There are Israeli, American, and liturgical pieces.

“It’s a breadth of Jewish text and musical styles,” Ms. Hanan said. “In HaZamir, the whole is greater than the sum of its parts. All the conductors teach the same material we receive from the national office, here and in Israel.”

At the Winter Intervisitation retreat, the East Coast chapters blend their voices for the first time. 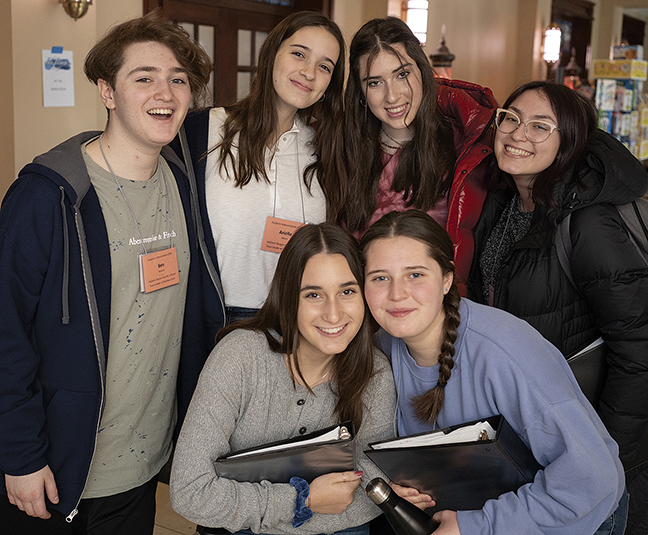 From left, top, Ben Mitnick of Mahwah, Ariella Mann of Teaneck, Olivia Mimeles of Harrington Park, and Margalit Ramirez of Teaneck; and below, from left, Chantal Efrat of Montvale and Eliana Loffman of Teaneck. (Wah at Happy Haha Studios)

“When we come together, everyone knows the material and we just solidify and polish it,” Ms. Hanan said. “The kids get to work with conductors from the different chapters and get to experience their different personalities and musical styles. It’s an incredible growing experience for them.”

Ariella Mann of Teaneck, 17, a junior at Abraham Joshua Heschel High School in Manhattan, put it this way: “All of us have learned the music separately, and when we sing together the first time it’s magical.”

Ariella’s family is active in Beth Sholom. She joined HaZamir as soon as she was old enough, following in the musical footsteps of her older brother Matan.

“I love it because I don’t have many other chances to sing professional choral music,” she said. “And it really is professional because they treat us as professionals. It’s also a great way to spend time with other Jewish teens who like singing as much as I do.”

Ariella’s father, Benjamin Mann, is head of school at Schechter Manhattan. “HaZamir is a wonderful experience for Jewish teens who are musically inclined to express themselves Jewishly and be part of a Jewish community at the same time,” he said. 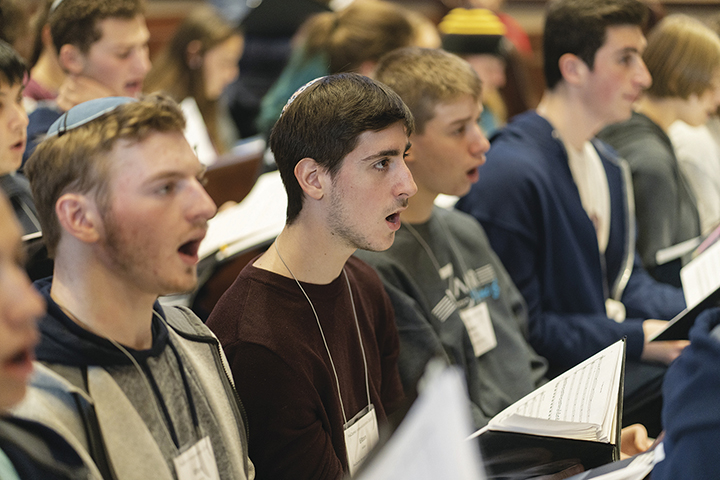 “It’s rigorous; it helps kids raise their game as musicians and performers,” he continued. “This year, Ariella is also in the HaZamir Chamber Choir, which performs complex choral music. She’s learning to think about music in various ways and how to evoke a certain set of feelings and ideas when performing. The musical component is so top notch and the organization is so Jewishly identified. You couldn’t ask for a better confluence of values important to our family.”

Ariella also has gained an extended community of teenagers, including those from the Israeli chapters. “The chapter from Kfar Saba stays in Teaneck for the gala, and some stay in our home,” Mr. Mann said.

Both Ariella and Ben are HaZamir teen leaders; those leaders gathered for a Shabbaton in Teaneck before the the January retreat to plan social activities.

“At the retreat, I was with a group of sophomores, mostly new to HaZamir, and I was able to facilitate games and programs to help them get to know each other,” Ariella said.

HaZamir’s new educational program, InChoir, was a novel component at the Closter retreat this year. InChoir, which was piloted in Baltimore, is intended to deepen the young singers’ connection to seven of the texts they sing, “to help them become more literate Jews, and to help them sing the music with greater meaning,” Ms. Lazar said. 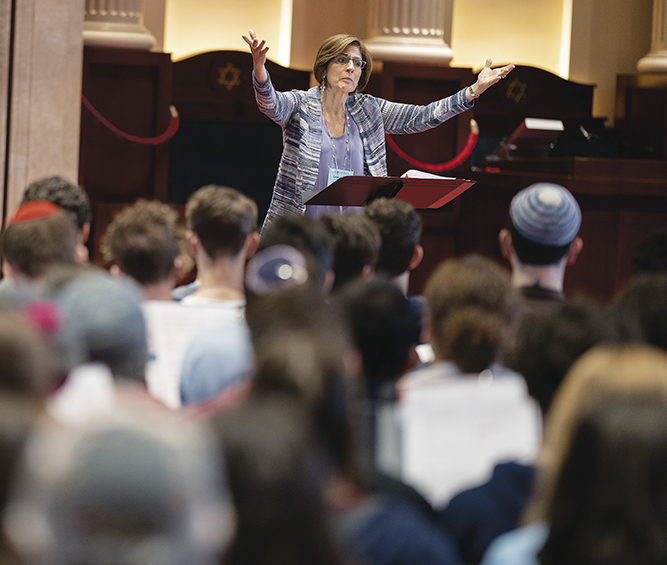 “For example, one of the anthems of the Jewish choral movement is ‘T’filah Lish’lom M’dinat Yisrael’ — Prayer for the State of Israel — composed by David Burger to the words written by Rabbi Isaac Herzog after the Six-Day War,” she continued. “We interviewed David Burger for one of our InChoir videos.” (Mr. Burger composed the song at Mr. Lazar’s request, and the two men worked on the choral arrangement together.)

Study sheets for each of the seven songs are arranged like a page of Talmud. The core text, in both Hebrew and English, is at the center; it’s surrounded by explanatory content and context, objectives and goals. There are questions on the back of each sheet for study partners to ponder.

The Zamir Choral Foundation also sponsors the Zamir Chorale, founded in 1960 as the first Hebrew-singing choir in North America; Zamir Noded, for HaZamir “graduates” who range from 18 to 30 years old; and HaZaPrep, for seventh and eighth graders. HaZaPrep is the first Jewish choral preparatory program in the world. The Mandell Rosen Fund for New Music provides support for the foundation’s commissions.

HaZamir’s January 27 performance was dedicated to the memory of Bernie and Ruth Weinflash, who created the Shirah Jewish Community Chorus at the Kaplen JCC on the Palisades in Tenafly in 1995. (The Weinflashes lived in Cresskill.)

“Shirah was never strictly associated with HaZamir — but there was a lot of overlap,” Ms. Lazar said. “The Weinflashes were very big supporters of choral music and dear friends of the Zamir Choral Foundation. They believed choral music brings people together and that is our mission, bringing harmony through music.”

Ben, whose family belongs to Beth Haverim Shir Shalom in Mahwah, said that HaZamir has led to “the best friendships I’ve ever had.

“It’s a very freeing community,” he said. “There are so many different sects of Judaism — and everyone here gets to just have a space to exist and sing and have a good time.”