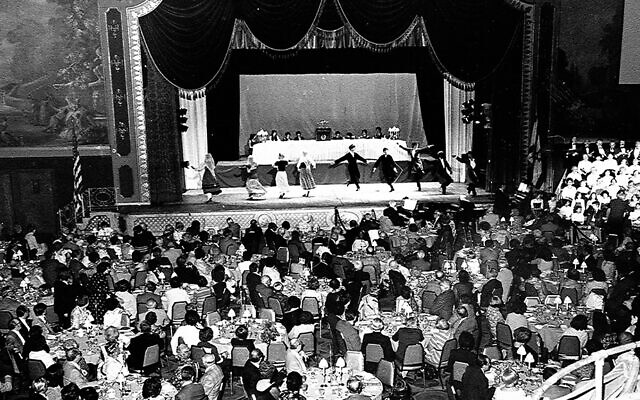 Crowds gathered for the arts-rich seder at the Waldorf Astoria in the 1950s and ’60s. (Photos courtesy Workers Circle)

The internet is an odd place.

It can foster divisions, feed disinformation, cause sharp wits to go dull and bright eyes to glaze unblinkingly over.

But it also can link people across continents, and also across centuries. Space and even time can meld and blur.

The seder itself, the basic one that we hold twice a year, is old, probably millennia old, although it has changed and grown over that time.

The third seder is much more recent. It’s less than a century old. It was created in 1910, flourished after World War II, and then dwindled to a wraith and vanished in the last decade or so.

But now it’s being revived online; it’s still a paean to Yiddishkeit and to the progressive politics that drove the Yiddish world in the early and middle 20th century, but now it links performers in the United States, Israel, Canada, Germany, and the Netherlands too. The internet divides, but it also connects.

Rabbi Avram Mlotek grew up in Teaneck. He’s a cofounder of Base, and he and his wife, Yael Kornfeld, lead that Hillel outreach outpost on the Upper East Side.

He remembers the third seder from his childhood. “I grew up going to third seders,” he said. “We had the two traditional seders with my family” — his father is Zalmen Mlotek, National Yiddish Theatre Folksbiene’s artistic director and the son of prominent Yiddishists Eleanor and Joseph Mlotek. “My father’s world has always had the third seder, and when my grandfather was the education director of the Arbeter Ring” — that’s the organization that recently changed its name from Workman’s to Workers Circle — “he helped grow it into a musical extravaganza. I loved it when I was a child.”

Zalmen Mlotek knows more about the third seder’s history. “It was something that the Workmen’s Circle and other Jewish groups formed, I think in the 1930s” — the exact time is a little unclear — “to have a celebration that would be a model for their seder at home. In fact, for many families this was their seder.

“The seder’s theme is freedom and the emancipation of slaves, and of course that ties into all kinds of moments in Jewish history,” Mr. Mlotek said. “And then, on April 19, 1943, the night of the first seder that year, the Warsaw Ghetto uprising began. There is a whole section in the haggadah” — the third seder has its own, based on the traditional one — “that deals with the Holocaust and specifically with the Warsaw Ghetto.”

So the main elements of the third seder were set — the traditional narrative of the seder, in Yiddish, was expanded to include the founding groups’ progressive ideology and the history of the evil that had just unfolded in Europe, along with the survivors’ escape. The third seder also emphasized liberation and joy, as it expanded comfortably into postwar America. It became a major big deal.

It was in a ballroom at the Waldorf Astoria, one of Manhattan’s grand hotels.

“For many years, there were upwards of 500, even 600 guests there,” Mr. Mlotek said. People sat around tables — this was a seder, after all, and featured both food and wine — “and there was a cultural program for about 50 minutes, and then the meal, and then, after the meal, the second part of the program, which was somewhat shorter. 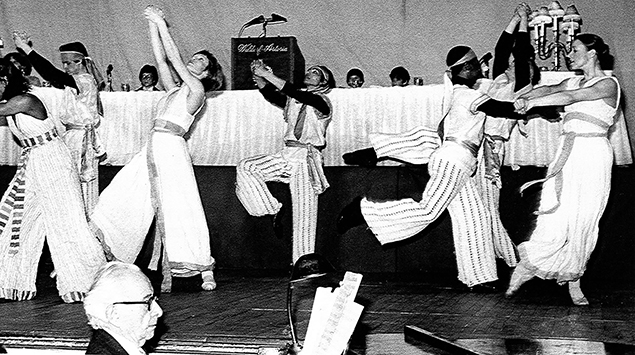 Dancers mimed the Israelites’ passage from slavery to freedom.

“It was a major event, with dancers and actors and costumes. There were hundreds of kids involved, because the children in the Workmen’s Circle schools would participate. And my father engaged Israel Welichansky, who was an actor in Yiddish theater, to direct and narrate it, and he taught the children how to present it.

“It is very clear in my memory, how he taught us to pronounce and enunciate the words. It was a beautiful evening.

“It was the secularist celebration of Pesach,” Mr. Mlotek said. “I grew up in that world. That was my world. That was my Yiddishkeit. I grew up in an entirely secular bundist Jewish home; in fact, it wasn’t until I met my wife, Deborah, that I encountered the rest of Yiddishkeit.” Now the family, including Zalmen, Deborah — an occupational therapist for the New York City Board of Education — and their children, all are modern Orthodox, but Mr. Mlotek retains a deep connection to his background, and a deep and clear love for it.

Eventually, he said, the third seder withered away. The 50s turned into the 60s, the times changed, the seder became smaller but continued, until eventually, just a few years ago, it stopped.

And now it’s coming back.

Avram Mlotek remembers saying the Four Questions, in Yiddish, as a small child. He loves what it is that the third seder represents. “It was a cultural community,” he said. “It wasn’t a traditionally religious community, but it had room for everybody. I miss the third seder, and now, with everything that’s going on, with people in greater isolation than ever, I felt that it was a great time to revisit the idea.

“We’ll use many of the songs and poetry that appeared in the traditional third seder. I don’t think that the narrative element of the seder is all that different from any other Passover seder — it’s the story about going from slavery to redemption, from persecution to freedom — but the way that we get there will be different. There will be songs that people know, and songs that people don’t know. It will be wonderful, expanding what it means to be Jewish and to practice Judaism and Yiddishkeit.”

There will be musicians and a dancer; the performers will include Frank London, Joyce Rosenzweig, Lorin Sklamberg, Susan Abbe Watts, Joanne Borts, Sarah Gordon, Michael Winograd, Shura Lipovsky, Daniel Kahn, Elmore James, Steven Skybell, and of course Zalmen Mlotek. “They’re a lot of well-known musicians; they’re also people I grew up with,” Rabbi Mlotek said. “Some of them are people I remember performing at the third seder.”

The technology is in two parts. The performers will be on Zoom; the audience will watch it on Rabbi Mlotek’s Facebook Live stream. (See below.) The internet will connect everything; this time bringing people closer rather than fragmenting them. “It’s ironic,” Rabbi Mlotek said “The place where we have been going to avoid each other now is the place we turn to so we can be with each other.

“The internet is a vessel. A kli. A tool. Thankfully, we have the technology that can meet our needs. I hope, I pray, that there will be a lot of music and arts available there.”

There is another element to the third seder. It’s entirely free, but Rabbi Mlotek is asking viewers to donate, and he suggests that the donations go to the United Community Center of Westchester. It’s another irony; the third seder is in some ways place-less, floating in the ether, but the designated charity is highly specific and entirely local.

That’s not accidental. Rabbi Mlotek first heard about it when the coronavirus first hit. The connection came through a friend. “It’s in dire need,” he said. “It serves many immigrant families; it has a food pantry.” Base has worked with other local groups. “We are always looking for ways to be local partners,” Rabbi Mlotek says; it delivers cooked meals to the shelters at the Stephen Wise Free Synagogue and Congregation Ansche Chesed, both on the Upper West Side. The needs are great all over; the way to start is just to pick someplace to start and then do it and do it again and then do it yet again.

Inspiration can come from the first and second seders, which we each will do alone or in small groups at home, and then from the third seder, connecting us all online.

What: The third seder

Where: All around the world, on Zoom; you can see it in Facebook Live on Avram Mlotek’s public Facebook page