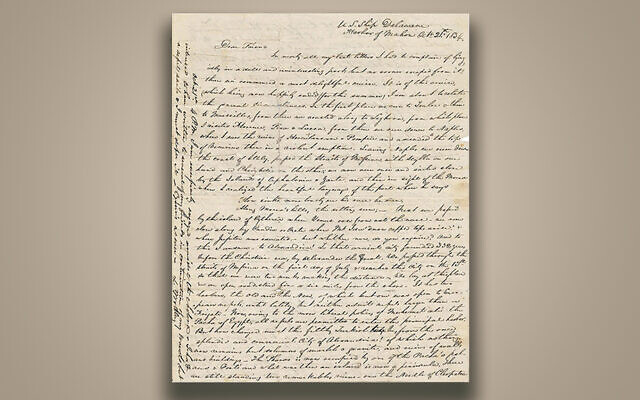 A detailed account of one of the earliest American diplomatic voyages to Palestine has surfaced as part of an upcoming auction in Jerusalem.

The account appears in a handwritten letter from one of the passengers of the USS Delaware, a U.S. Navy ship that visited the Mediterranean Sea in 1834 and made a stop at the port town of Jaffa, then under the rule of the Ottoman Empire.

Sent from the Spanish island of Menorca and addressed to Circleville, Ohio, the four-page letter describes several historically significant moments in the sailing ship’s journey, including a stop in Palestine and a visit with the first American diplomat stationed in the region.

According to Kedem Auction House, the letter’s existence was entirely unknown to scholars who study the history of the Holy Land and U.S. diplomacy in Palestine.

The passenger who write the letter, Lewis Woofley, describes traversing much of the Mediterranean on an eastbound route along the coasts of France, Italy, and Greece with stops at various islands. Eventually, the ship reached the port of Alexandria in Egypt.

An extended stop in Egypt allowed Woofley and other passengers of the USS Delaware to venture inland, where they had an encounter with the local ruler, Mohammad Ali, known today as the founder of Egypt.

From Egypt, the ship sailed northeast along the coast until reaching the shores of the Holy Land. This is how excited Woofley was on the morning of arrival, according to the letter: “The Holy Land! Palestine! The feelings, the reflections, the ecstasies, you may more readily imagine than I describe.”

An American diplomat stationed in Palestine, David Darmon, boarded the ship and briefed the visitors on what conditions to expect when they disembark. Darmon was a French Jew who served as a consular agent, the first American representative in the area. Little is known about him, which makes the discovery of the letter significant.

Woofley was excited to make a pilgrimage to Jerusalem, but Darmon delivered some news that seemed to quash that possibility. Palestine was in an “unsettled state.” Darmon shared news of bad roads, bandits, and a dangerous plague gripping the area.

“What a pity!” Woofley writes. “After having come so far and being so near to it — Like Moses, we are only to be permitted to see the Promised Land but not to enter it.”

Other letters among the auction’s 124 lots include one sent in 1054 from Ramla to Jerusalem which ended up in the Cairo Geniza; one signed by Albert Einstein; and a handwritten, anti-Semitic letter from composer Richard Wagner.