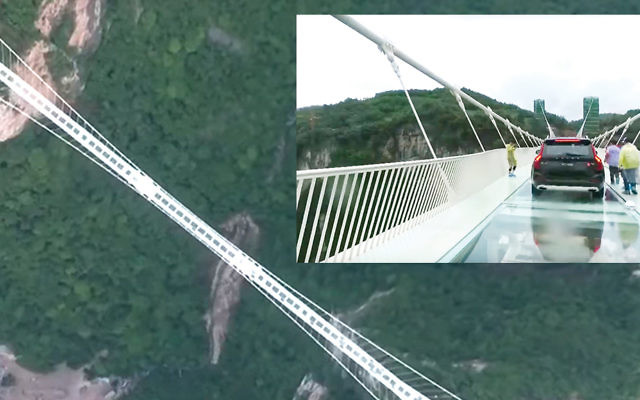 Warning: If you’re prone to fear of heights, you might want to skip this story.

And it’s okay if you do. The vertigo-inducing bridge this article discusses isn’t even in Israel. It’s in China. The Israeli connection is the architect, Haim Dotan. His Tel Aviv staff of architects and urban designers has built public and private projects in Asia, the Persian Gulf, Africa, Israel, and Europe.

Dotan’s new project is one of the scariest and most beautiful bridges ever built. The bridge in the Zhangjiajie Grand Canyon is creating headlines across the world because of its length, height, location, and transparency.

For those of us who cope with crossing bridges by determinedly looking down at the pavement rather than over the railing — this is definitely not a bridge for us.

The specs are jaw-dropping: the bridge is more than a quarter mile long, 20 feet wide, and is composed of 99 three-layer transparent glass panes through which visitors can look down 1,000 feet to the ravine below.

The canyon in Zhangjiajie National Forest in China, with its jagged rock formations and lush vegetation, inspired director James Cameron when he envisioned floating peaks in the film “Avatar.”

The site is said to be so beautiful that Dotan first refused the offer to design a bridge across the canyon, according to Wired magazine. “[The developer] asked me, ‘What do you think about a bridge from here to there?’ And I said, ‘No,’” Dotan told Wired. “He looked at me and said ‘Why, what are you talking about?’ And I said, ‘Why do you want a bridge? It’s too beautiful.’”

But Dotan did build the bridge, and though it was completed last December, the official opening took place last month. It has already notched up some records, including being the longest — and scariest — glass pedestrian bridge in the world.

Dotan’s condition for designing the bridge was that it wouldn’t ruin the beauty of this national park in Hunan Province. “I told [the developer], ‘We can build a bridge but under one condition: I want the bridge to disappear,’” Dotan told Wired.

Indeed, the glass see-through bridge seems to float above the ground and offers an unobstructed view of the Zhangjiajie Grand Canyon.

Chinese authorities want this bridge to be an international tourist attraction and are staging promotional stunts: They have invited volunteers to drive an SUV across the bridge to prove its safety; and to prove its durability, they bashed one of the glass panes with sledgehammers.