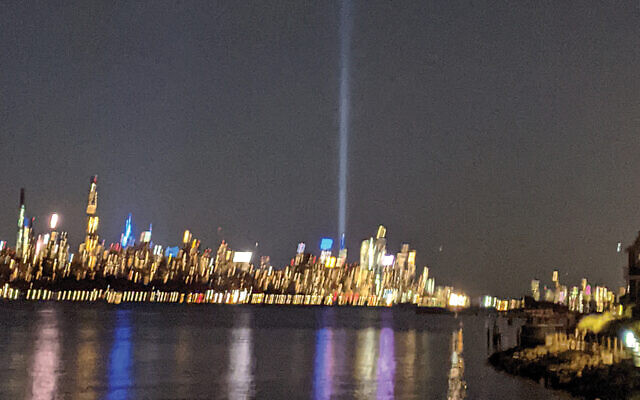 This shaky photograph, taken with an iPhone and great emotion from a balcony in Cliffside Park, shows the Tower of Light over Manhattan on the evening of September 11. (Renee Schlesinger)

Early on Shabbat morning, I passed two men walking toward me on Riverside Drive, one right behind the other, seeming to walk in lockstep, although in fact they were entirely unrelated to each other.

The first was a somewhat pudgy man in early middle age, dressed like a black-hat Jew in yes, a black hat, a white shirt and black suit, with visible tzitzit. The second was a young Black man, a police officer or firefighter, in dress uniform, with a black face mask.

The first man probably was walking to a shul or shtiebel; the neighborhood is studded with them. The second most likely was headed toward the 19th annual commemoration at the Fireman’s Memorial.

It was Shabbat Shuvah, the Shabbat of Return, in between Rosh Hashanah and Yom Kippur.

It was Saturday, September 11.

As I walked back home with my dogs, I passed many firefighters and police officers, on their way to the memorial. Some of them were wearing kilts; they were bagpipers. Once I was home, on the 13th floor, with my windows open, I could hear the pipes’ lament. Like a shofar, a bagpipe’s cry can cross long distances to rend your heart.

Just before the ceremony was to start, Andy and I walked to the end of our block, past the fire engine parked in the middle of the street, and down to the lawn on Riverside. There were some onlookers like us, many with their dogs, and rank after rank of uniformed officers, lining Riverside for blocks in both directions.

The organized part of the morning began with a bagpipe playing an American anthem — was it “Oh Say Can You See”? Was it “America the Beautiful”? I don’t remember clearly because it’s embedded in my memory in a haze of emotion. I was very glad of my foresight in wearing sunglasses, because to my surprise, I cried. We had been asked to rise — not a problem, because who wants to sit on grass that you know also is a dog toilet? – and as the officers saluted and we civilians put our hands over our hearts, I thought of the Al Chet that we’ll be saying in a few days. It’s not an identical motion, but it’s strikingly similar.

The heart of the ceremony was paying witness as the list of names was read.

Because it was specifically a firefighters’ memorial, set at the Fireman’s Memorial – a 1913 sculpture and fountain created by Attilio Piccirilli, the first of five sculptor brothers and the only one, according to my good friend Wikipedia, whom Mayor Fiorello LaGuardia addressed, at least occasionally, as Uncle Peach — although all the 9/11 dead were acknowledged and honored, only the names of the firefighters were read aloud. 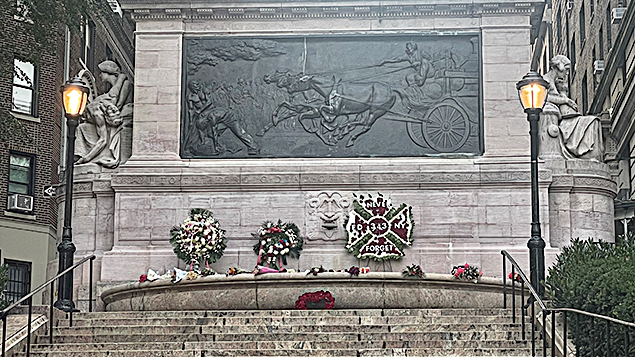 On Monday morning, the wreaths that were presented on Saturday stood in front of the Firemen’s Memorial on Riverside Drive. (Joanne Palmer)

Three hundred and forty-three firefighters died on September 11. Each man’s name was read aloud, along with his rank and unit, and each was punctuated by the clang of a fire bell. The reading was interrupted twice, for a minute of silence, marking when each tower was hit. A few readers shared the surprisingly long task of intoning each name; they had different voices, but each had a thick, unmistakably New York accent.

Some of the firefighters had been promoted posthumously. A few of the names were recognizable — Father Mychal Judge, who now is a candidate for sainthood; Scott Davidson, the father of SNL’s famously-from-Staten-Island Pete Davidson — but most were not. All of the firefighters were men; judging from their names, most were Irish or Italian, but there were some who sounded Polish, or Jewish, or Latino, or African, or just unplaceably American. Because this was New York, though, overwhelmingly they were ethnic.

Because the reading was so long, I found my mind wandering. The list was in alphabetical order, so I started thinking about the alphabet, guessing which letters would have more names, and what second letter would be likely to follow the first one. I would surf from that back to the reality of the names, the realization that each name had been a real person, and each real person had acted with extraordinary courage and died surrounded by hideous evil. I’d try to imagine what they did, and I’d fail. Then I’d skitter back to the safety of the alphabet.

Then a bagpipe played “Amazing Grace.” When you hear the words, it becomes a profoundly Christian song, but when you just hear it played on a bagpipe, it’s just deeply moving. It’s primal. Once again, I had a feeling that I wasn’t the only person there who was crying.

There was a band there; my memory tells me that it was announced as the Marine band from Quantico. As the ceremony ended, it played Sousa. Perhaps there is someone somewhere who does not love a brass band playing Sousa — certainly there are many people who won’t admit to it, but I don’t believe them. It is glorious, and it changes the mood.

After the ceremony, people talked. Each one of us has a story, mostly, for us lucky ones, not about firsthand tragedy but instead about how quickly a normal day becomes something else.

My sister insists that she has no real story, but she does. She’s a public-school librarian, and in 2001 she was working at Westinghouse High School in Brooklyn, right in between the Brooklyn and Manhattan bridges, right across the river from downtown Manhattan.

Soon after the towers were hit, in the intense surreality of it all, driven by the need to do something, anything, Lynn asked her principal if she could go give blood, and he said yes. So she went to the Red Cross offices close to the school. She got there so early, she said, that she was able to wait on line inside the small office; soon, as more people realized that the one thing they had to give was blood, the line stretched down the block. (It was so early that almost no one realized that there’s be almost no need for blood. There were very few wounded survivors.)

Later, when Lynn got back to school, the bridges and tunnels going out of the city re-opened, and she and the rest of her carpool went back home to Staten Island. It was eerie, she said, being in one of the few cars on the road there. At one point, where the BQE curves around Lower Manhattan, she and her friends had an unencumbered view of the burning, smoking rubble.

Just earlier this month, she said, she’d looked for her blood donor card, and looked at it, really looked at it, for the first time in a long time. It was dated September 11, 2001.

Later on Shabbat, I ran into my next-door neighbor. Jody is a dancer and choreographer — she once spent six weeks in Antarctica aboard a U.S. Navy submarine, working on a dance that she performed first on an ice floe, but that is a story for another time. Jody told me that her 10-year-old daughter had heard the bagpipes through their open window and asked her mother about the day’s story. Jody told her – every year she tells her a bit more, she said — and then her daughter stumped her with the most basic question. “Why did they hate us so much?” Evie asked. “I don’t know what to tell her, because I don’t know,” Jody answered, and that’s the painful truth.

Jody told me her own 9/11 story. She’d walked across Central Park, entranced by the so-blue sky and the perfect day. When she left the park and walked out onto Manhattan’s Upper East Side, she saw phalanxes of ash-coated stunned-silent people marching toward her. It was so surreal, she said.

After the ceremony, we ran into friends of ours, Israelis who live in our neighborhood, belong to our shul, and like us felt that they belonged at the memorial. They also found themselves crying, they said. As everyone else did that day, we exchanged our September 11 stories. Avi was reading, Michal was eating breakfast, they were taking their kids to school. It was the first day of school. It was a primary election day. It was just a day, until it wasn’t.

Then Avi looked at the masses of uniformed men and women, no longer standing at attention, and said, “How many of those guys don’t believe what we believe? Don’t share our politics? Many of them.” Judging by surveys and newspaper stories, he’s right. Many of them believe the presidential election was stolen. Many are not vaccinated and will fight to keep themselves susceptible to the virus.

But that morning, none of it mattered. We all were there for one reason. Memory and hope had brought us together under another bright blue cloudless September sky. It might be a vain hope that this feeling will continue, but just then, it was a real one.