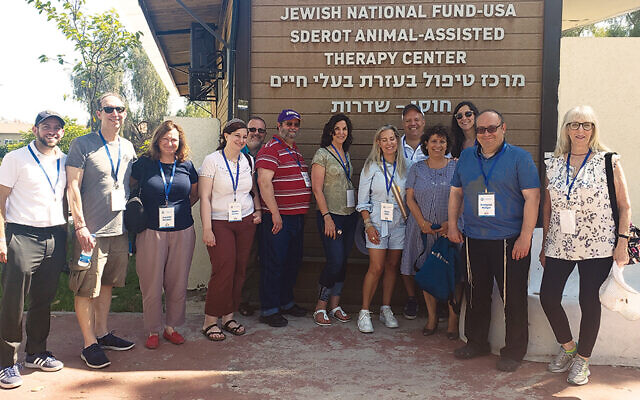 Simone Wilker of Washington Township was bummed out when a solidarity mission to Israel that she’d been planning to join got canceled.

But she didn’t give up on the idea. “I felt very strongly I had to come to Israel to support the country,” she said.

Then Ms. Wilker, a member of the Jewish Community Relations Committee of the Jewish Federation of Northern New Jersey, heard about a federation trip. It was planned for rabbis, but she was not deterred. She asked the federation’s CEO if she could join the trip.

That’s how she ended up landing in Israel with a group of 12 on June 28.

“We are very excited to be here, and everyone seems excited to see Americans arriving in Israel and staying in hotels and eating in restaurants and spending money,” she emailed on the morning of June 29.

“We are busy every single day from 7:30 in the morning till 11 o’clock in the evening,” she continued. “Yesterday we toured the Knesset and met with Deputy Foreign Minister Idan Roll. Today we talked with residents in Sderot, Ashkelon, and Ashdod. Tomorrow we go to Akko. We have had briefings from top-level people and visited an Iron Dome installation, where we were able to speak to one of the IDF professionals.”

The three-day mission included visits to social-welfare programs the federation supports in its Partnership2Gether sister city, Nahariya, in the north, and in Sderot near the Gaza border in the south.

Among these programs are the JNF-USA Sderot Animal-Assisted Therapy Center, run by the Israel Trauma Coalition, and the Jewish Agency’s Youth Futures mentoring program for at-risk young people, in locations including Nahariya.

“I knew we were sister cities with Nahariya, but I didn’t know we are supporting a mentoring program that works with kids and parents one on one,” Ms. Wilker said. “We got to talk to the social workers who go out at night and seek out teenagers who are hanging out and getting in trouble. They try to build a relationship with them and bring them into Youth Futures’ three-year program and try to make them successful. 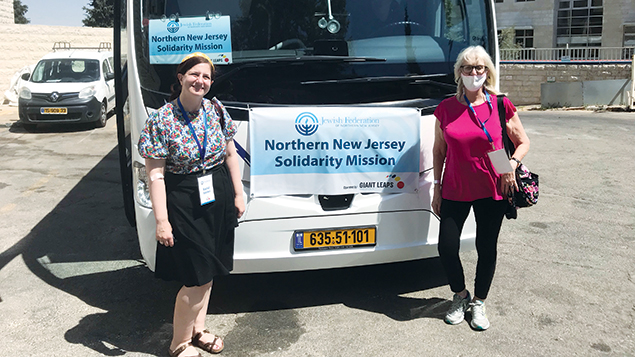 Rabbi Rachel Salston and Simone Wilker are ready for another packed day of meetings and activities. (Courtesy of Simone Wilker)

“I was really happy to see that the dollars I contribute are really going to people in need in Nahariya, mostly Ethiopians who don’t understand the language and the culture. It was amazing, and I was very proud.”

Jason Shames, CEO and executive vice president of the Jewish Federation of Northern New Jersey,  said that Youth Futures mentors, especially in Sderot, faced a difficult year between the lockdowns during the covid epidemic and the 11-day war in May, during which thousands of missiles were shot at Israel from Gaza.

“There are bombs falling and you’re in a shelter worried about your own family, and you have kids from the program calling you constantly for support. That, to me, is heroes’ work,” he said.

Ms. Wilker and Mr. Shames both said that the overwhelming impression they got from the Israeli people is their capacity for resilience.

“You go out and see people are smiling,” Ms. Wilker said.

“Covid has been devastating with the lockdowns and no work at all for the tour guides. The last war was horrendous and Israeli Arabs were bombing Uri Buri in Akko, one of the top restaurants in the world, and yet the owner says, ‘I’m rebuilding and I’m not letting it get me down.’ People are worried about the Delta variant but they’re out there smiling.”

“The image I took with me was the smiles and appreciation on every Israeli’s face when we met with them,” Mr. Shames added. “It felt to them like their family had come home.”

A few Bergen residents who were already in Israel joined the group for some activities. They included Nina Kampler, Dr. Zvi Marans, and Yehuda Kohn of Teaneck and Rabbi David-Seth Kirshner of Temple Emanu-El in Closter.

“The trip’s goal was to show support for the Jewish people and the state of Israel, and to have an opportunity for the rabbis to bond and build strong communities back home,” Mr. Shames said.

“It was a great group because we had two Orthodox, three Conservative, and one Reform rabbi,” he added. “The best part for me was watching how the rabbis from different streams bonded over discussions about their work and their challenges, focusing on what binds, and not separates, the Jewish people. This shows why it’s so important for people who identify as Jews and believe in the Zionist dream to come together. It’s magical to watch the transformation as they get to know each other.”

Rabbi Fine concurred, saying that over the course of the four intensive days together, “we became friends. We learned to laugh with each other, but also to hear and respect our varying perspectives. While it should not be shocking to discover that the things that united us are far greater than what divides us, it is still wonderful to experience.

“The bonds that we formed will serve the Jewish community that we all care so much for.”

The visitors also participated in an archaeological dig, toured ANU: The Museum of the Jewish People in Tel Aviv, raised a glass at Jem’s Beer Factory at Caesarea, observed the Joint Distribution Committee at work encouraging vaccinations in East Jerusalem, met with leaders of the Ethiopian National Project and the Jewish Agency’s Nativ conversion program for IDF soldiers, toured Galilee Medical Center and the educational-therapeutic Nirim Youth Village, and met with Nahariya’s Mayor Ronen Marelli.

Mr. Shames said the aftereffects of the war were paramount in their discussions.  “The Israelis know they have their work cut out for them,” he said. “They know they won the moral high ground in this conflict but lost the social media war, and they recognize it triggered a significant rise in global  anti-Semitism.

“At the same time, there is hope that the new government can work differently with the rest of the world and make a difference in this battle.”

“Israel is complicated and is changing,” Rabbi Fine added. “There is much hope for the new government, and for a future pulling out of the quagmire of pandemic, political stalemate, and violent hostilities. While Israel feels wounded by this difficult time, it is a healing wound. And the relationship between the American Jewish community and Israel is critical, not only for financial and political support, but also for the sense of Jewish peoplehood and what that means.”

Asked what New Jersey residents can do from afar, Mr. Shames responded, “Advocacy, advocacy, advocacy, and philanthropy are the best ways to support Israel now. Standing up for Israel in every way, shape, and form — with the media, with elected officials, in the workplace, in the community, and with other groups.”

The federation, he added, stands ready to provide resources and training for teens and adults.