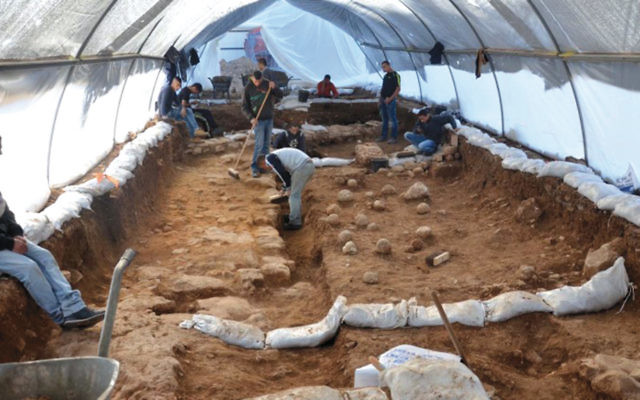 It is a battle that is long remembered. Now its battlefield has been located.

Archaeologists say they have found where a Roman army breached the walls of Jerusalem in the year 70 C.E., leading to the destruction of the city and of the Second Temple.

The new finds were made during an excavation in the Russian Compound in the center of the modern Jerusalem, where a new campus of the Bezalel Academy of Arts and Design is to be built.

The archaeologists say they discovered the remains of a tower jutting from the ancient city wall. (Today’s Old City walls date to only 1537.) Opposite the tower’s western facade they found scores of formidable-looking round stones, which they believe were fired from Roman catapults toward the Jewish guards defending the wall. Pottery discovered at the site suggests this battlefield dates back to Roman times.

“This is a fascinating testimony of the intensive bombardment by the Roman army, led by Titus, on their way to conquering the city and destroying the Second Temple,” archaeologists Dr. Rina Avner and Kfir Arbib said in a statement. “The bombardment was intended to attack the sentries guarding the wall and provide cover for the Roman forces so they could approach the wall with battering rams and thereby breach the city’s defenses.”

The Israel Antiquities Authority scientists say their discovery could end an unresolved debate about the war. The historian Josephus, an eyewitness to the war, wrote about a Third Wall of Jerusalem, noting it was designed to protect a neighborhood called Beit Zeita, which was built outside the city’s boundaries.

King Agrippa I of Judea is said to have begun building the Third Wall. Two decades later, the project, which had been left unfinished until then, was completed, on the eve of the Great Revolt against Rome.

Until now, no one has known either how long the Third Wall stretched or Jerusalem’s boundaries at the time.