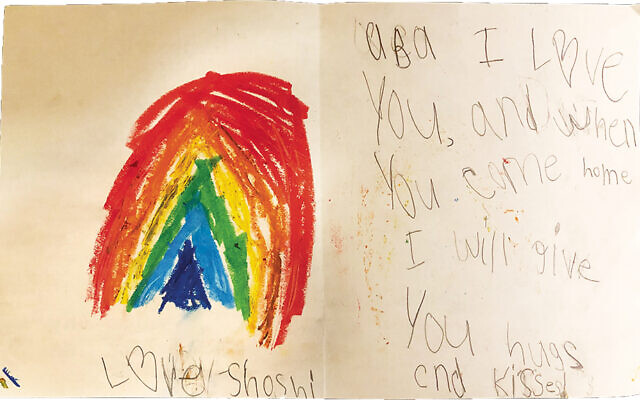 The Hods’ youngest child wrote this card to her father.

Her letter was simple and heartfelt.

“As a dedicated reader — always on Friday night after the kids are in bed and we have cleaned up the board games — I yearn to read a ‘happy’ story in the midst of this crisis!”

Now, thanks to her own letter, we can grant Eileen Hod that wish.

Eileen’s husband, Eldad, does research at Columbia University Hospital. More specifically, he is a clinical pathologist who specializes in transfusion medicine. “Among a variety of Covid-related research topics, Eldad is focusing on a study of convalescent plasma to collect antibodies from people who have recovered,” Ms. Hod said. “He hopes to find a treatment soon!”

The couple, who have four children ranging in age from 5 to 15, live in Tenafly, and until last week, “Eldad was working tirelessly,” spending 18-hour days at the hospital, commuting home, “and petrified to bring the virus home to us,” Ms. Hod said.

“Immediately, a co-owner of the Hotel Belleclaire on 77th and Broadway volunteered his currently closed hotel to house Eldad indefinitely,” Ms. Hod, acknowledging the generosity of Shimmie Horn, with whom they share a mutual friend. “The hotel was closed, but they have live-in managers and staff. Eldad has his own floor, his own fridge and microwave.” He even has a key to the front door. 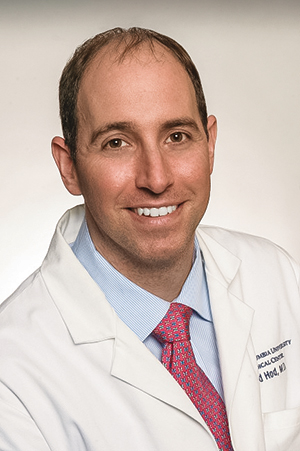 But a doctor has to eat. “Then, at lightning speed, friends on the Upper West Side organized a kosher meal train to keep Eldad nourished and fed.” And not just friends. “Complete strangers from the Jewish community have been helping him out, and even volunteered to cook for any other doctors in such a position,” she said.

Ms. Hod is astounded by the generosity of “women and friends who reached out to other friends who don’t even know us. They organized TeamEldad250West77thStreet. Someone sent Girl Scout cookies, for him to share at the hospital. And sometimes the meals include notes from children, thanking him.” The story “exemplifies the Jewish community’s ability to rally and support in times of need,” and personally, she added, she and her husband are extremely moved by the generosity they have seen.

Recently, the Four Seasons Hotel put out a statement saying that it would house physicians free of charge, but Dr. Hod has no intention of moving there. “The Belleclaire did not get any press or benefits from offering to house Eldad,” Ms. Hod said. “The frum owner simply performed a mitzvah.” At least one reason Dr. Hod will remain there, according to him wife, is that “the staff at the hotel has become like family.”

Ms. Hod clearly is proud of her husband. “He’s a shy guy, a homebody, a family man, and a total mensch,” she said. “The word nachas is not strong enough, but I can’t think of anything better to describe it. We talk about heroes and service people, police, firemen, but this is a rare moment in history where scientists and doctors and nurses have stepped up to help society in a bigger way than ever.”

Dr. Hod has been gone now for several weeks, but “we keep calm and carry on,” his wife said. “This will not last forever.” She knows a few people who have lost relatives. “The Jewish world is pretty small,” she said, with very few degrees of separation.

“Eldad tries to call every night to say goodnight to the children, but when he’s wearing gloves, he can’t touch the phone,” she said. “He’s racing to find a treatment. One of the children asked if he will get a bonus.

The family back in Tenafly doesn’t have to worry about food, Ms. Hod said. “Eldad had been so worried he insisted that we stockpile a month ago.” In fact, she said, friends couldn’t understand why the couple chose not to attend services on Shabbat Zachor — the Shabbat before Purim, March 7 this year — and then on Purim itself, on March 9. “It was a big deal, and it felt weird, unnatural.” But, she said, by then Dr. Hod had started to worry about the risks of being in large gatherings.

Now, there’s Pesach. It’s not clear what will happen “Last year we were three generations together with my in-laws from Israel for Pesach,” Ms. Hod said. “This year, we just hope Eldad can come home to Tenafly for Pesach.”

Given Dr. Hod’s hands-on involvement in the coronavirus crisis, he has been invited to participate in several virtual webinars. For example, he was asked to speak at two symposia by the religious leaders “of our two synagogues,” Ms. Hod said; those leaders are Rabbi Akiva Block of Kehilat Kesher, Community Synagogue of Tenafly and Englewood, and Rabbi Zev Reichman of East Hill synagogue, she said.

“Last week on his live OU radio show, Rabbi David Pardo asked Eldad what keeps him going, since he, like many others, is working around the clock,” Ms. Hod said.

“I’m just a regular guy,” Dr. Hod told Rabbi Pardo. “I’m scared like everyone else, but I know that to keep our greater community safe, I can make a difference with science.” Even more, he added, “One good thing that can come out of this crisis is that I hope this inspires kids to go into science and healthcare. Saving lives is the ultimate form of compensation.”