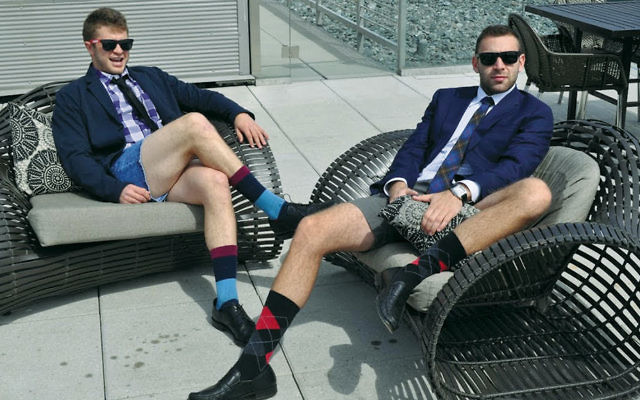 Mr. Field, 22, graduated from George Washington University’s undergraduate business school in the spring, so it perhaps is not surprising that he takes what other people might look at as fun facts as business opportunities. That’s certainly how he looked at the news that 85 percent of college students don’t read the official paper. The students’ lack of the kind of connection to the campus that a local paper provides is “a void, and my business partner and I thought we could fill it,” he said. “That was our big hairy audacious goal.”

So Mr. Field, who grew up in Tenafly, and whose family still lives there and still belongs to Temple Emanu-El of Closter, and his close friend and business partner Josh Strupp, who is not local — he comes from Nashville — but also is Jewish and also was a GW student, decided to tackle the problem. “Josh was a communications and journalism major, and one day, he just started thinking about how no students read the newspaper because it is completely overrun by the administration and alumni,” Mr. Field said. “There is no honesty in it.

“He was sitting in class, hearing all day that journalism is a dying industry, and he just wouldn’t believe it. He did think, though, that journalism as it is now practiced is outdated. So we kind of decided to create this student-run platform that gets all the important things that are going on on campus and outside of campus.”

The newspaper, called the Rival, does not have a print edition, and because it is financially independent, with no formal relationship whatsoever with its school, it does not answer to the school’s administration. Instead, “It’s all written by students,” Mr. Field said. “The editorial staff is all students. These students are working with their peers. They are not forced to write the stories that the administration wants them to write.

“GW’s official paper” — the GW Hatchet —”is funded by alumni,” he continued. “I think a lot of school papers are. And it’s completely administration-run. It’s a nonprofit, but everything that gets done is curated by alumni.”

The Rival is different. “We are not funded by anyone but ourselves,” he said. “We are free to the public. Our costs are more focused on the development of the website, and for marketing materials.” 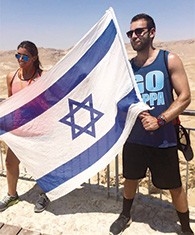 Myles Field and his sister, Dayna, wave an Israeli flag during a visit there.

About that name — the real story is that there is no real story behind it, he said. “I wish I had a better story,” Mr. Field said ruefully. “My business partner just came up with it.” It’s their name, and it’s their story, and they’re sticking with it.

“We have launched at nine schools so far, and we have a staff of over 200,” he added. It’s a diverse list of schools — public ones like Indiana, private ones like Duke, Catholic ones like Notre Dame, historically black ones like Howard. Each Rival’s staff is part-time, of course; every staffer except Mr. Field and Mr. Strupp is a student, and all of them except those two are volunteers. Working on the Rival is like working on any other school activity — except that the Rival is not funded by the school and is not answerable to it.

“Each paper has entirely separate content,” Mr. Field said. “It is completely run from the bottom up. We found one or two people at each campus who could create and direct an entire staff, as we did at GW.

“Everyone uses the same website template, but as you’ll see on the About Us part, every mission statement is different. It’s completely hyperlocal. The only thing that connects them, other than being on the same parent website, is the section that shows top stories in other papers, so kids can see what’s trending in other places.

“New content is posted daily — there is a minimum of 10 to 20 new stories a day.” Each website is divided into sections, and “every single section within a university Rival is specific to that campus,” Mr. Field said.

Perhaps the website does the best job of explaining the concept. “We are masterminds, taking a school’s distinctive culture, delicately placing it into a centrifuge, and separating the stuff that matters from the stuff that doesn’t,” it boasts.

The business partners are working some small jobs on the side, but the Rival is their start-up and their baby. “Right now I am taking the plunge,” he said. “In the long term, it is advertising that will support us.” To that end, the entrepreneurial Mr. Field has begun selling ads. “Most of them so far are nonprofits that deserve to get recognition,” he said. “And when we go to pitch to investors, we can show them.

“We want to expand the Rival.”

Mr. Field’s father, Brian, is not at all surprised by his son’s career choice. “I have always been entrepreneurial, and I have encouraged that in all four of my kids,” he said. “I never worked for anybody unless I ran somebody else’s business. I was always either the owner or the executive, and I have always tried to teach my kids that there is a better chance of more financial success if you own your own business, as opposed to just being an employee.

“That’s not to say that employees can’t make a lot of money — but when you have your own business, if it is successful, you can surround yourself with people you like and things you like doing.”

That’s exactly what Myles Field and Josh Strupp are trying to do.