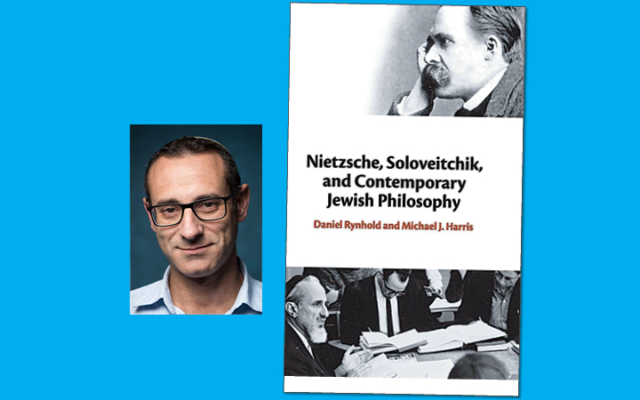 When Dr. Daniel Rynhold of Teaneck finished high school, he planned to become a scientist.

Then he spent his gap year in Israel and discovered Jewish philosophy.

This summer, Dr. Rynhold, 49, who has been a professor of Jewish philosophy at Yeshiva University’s Bernard Revel Graduate School of Jewish Studies since 2007, takes over the reigns of the institution. He is replacing Dr. David Berger, an expert in medieval Jewish history, who has led the institution since 2008.

Dr. Rynhold grew up in England, in a modern Orthodox Jewish family. He was good at science and assumed he would pursue that path. But then, in a now-defunct liberal Orthodox Israeli yeshiva, he discovered the vistas of Jewish thought.

“My Jewish education had been very particularistic,” he said. “Leaning toward a more ultra-Orthodox education, which many of the teachers were. I was taught views in my high school that seemed problematic. I just couldn’t accept them. I was being told to think these things I just didn’t think.”

So when he discovered the tradition of Jewish philosophy, “I suddenly had a home,” he said. “I was right — I didn’t have to believe that problematic stuff, because there were great thinkers from the past thousand years who hadn’t thought those things.

In his dissertation and his first book, he looked at the Jewish philosophical question that engaged him in yeshiva. “Two Models of Jewish Philosophy: Justifying One’s Practices,” published in 2005, looks at the philosophies that Maimonides and Rabbi Joseph B. Soloveitchik used to justify Jewish observance. “It was reading ‘Lonely Man of Faith’ on my gap year that was the clincher, that made me say that’s what I’m doing,” Dr. Rynhold said, referring to Rabbi Soloveitchik’s 1965 essay.

In 2018, Dr. Rynhold co-authored another book that dealt with Rabbi Soloveitchik: “Nietzsche, Soloveitchik, and Contemporary Jewish Philosophy.” It grew out of a course he took on modern philosophy in his senior years at Cambridge in which he studied Nietzsche.

“My extremely conservative rebellion was to study this thinker who everyone says was so dangerous,” he said. “Even then, at the age of 21, it didn’t disturb me in any way. I found myself agreeing with a lot of what he said. The reason is that I had read Rav Soloveitchik and I was convinced they had a lot in common. Not in terms of their positive prescriptions of how to live, but in terms of the kind of religion they both found problematic. In Nietzsche’s critique of religion, I could see parallels to what Rav Soloveitchik was criticizing in the religious sphere.”

As for his future project, “I’ve been thinking about the way the Torah describes God, which is anything but philosophical. I want to look at art and literature to see roots for understanding the portrayal of God in the Tanach and how that might be a more fruitful lens than classical philosophical approaches,” he said.

Dr. Rynhold will have less time for his own original Jewish philosophy as he undertakes the administrative challenge of running a school with more than 120 students, including candidates for masters’ degrees, doctoral students, and undergraduates taking a joint B.A./M.A. degree a Yeshiva.

“We’re in a good place,” he said. “The program itself is very strong. We can genuinely claim to be among the leading centers of academic Jewish studies in its fields — Jewish philosophy, Bible, Talmud, and Jewish history. My predecessor expanded our Ph.D. program exponentially. I think we had seven doctoral students when Dr. Berger started. We now have five times that number.”

He said his experience when Yeshiva closed its campus in March and shifted to online education “wasn’t too bad.” It helped that graduate classes have only 10 to 15 students and “they’re choosing to do this. They’re interested and involved. The losses have not been immense in terms of the education and the quality of the classroom discussion. It certainly wasn’t anything like the catastrophe certain people might have expected.”