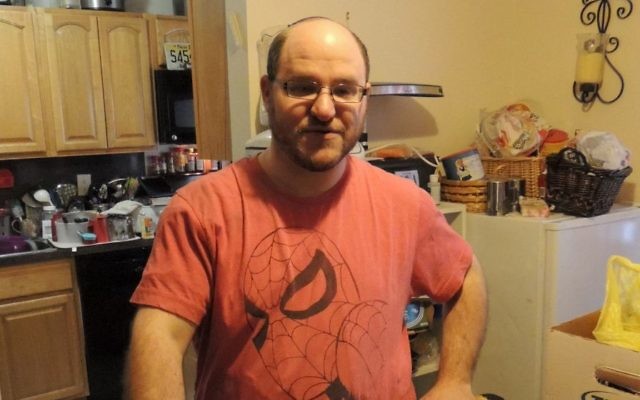 It would not be accurate to say that Mordechai Luchins did a mitzvah by putting a Macbook laptop computer into the oven at 400 degrees.

After all, someone else baked the laptop on his behalf.

But since that someone was doing so as part of Mr. Luchins’ efforts to repair used laptops and pass them on to those who need them, it would be fair to give Mr. Luchins some of the mitzvah credit.

Hearing Mr. Luchins explain why baking a laptop sometimes is a necessary step in laptop repair helps explain why, of all the mitzvah opportunities in the world, this is the one to which he devotes his spare time and a corner of his family’s Teaneck apartment.

Simply put, Mr. Luchins enjoys fixing computers. He revels in the research necessary to know when you can use parts from a Dell Inspiron 1526 to patch up a Dell Inspiron 1525. (That actually is a no-brainer — he explains that the two machines are the same except for whether they have an Intel or AMD chip inside.) And he enjoys the “borderline compulsive” attention required to keep track of the tiny screws as he swaps out one part for another, in an operation that could take an hour or more.

If it sounds like Mr. Luchins, 37, is a geek — well, the father of two is a regular contributor to a website called GeekDad.com, where he writes on parenting; reviews comic books, television shows, and television shows based on comic books, and explains Jewish holidays.

How not to dispose of laptops

Mordechai Luchins has a word of advice for those thinking of getting rid of an old or broken computer:

Be careful. There’s probably a lot of personal information on its hard drive that you don’t want to dispose of willy-nilly.

He tells of the time that he stopped by the town dump. He was talking with the attendant when a woman dropped off a laptop she said was broken.

After she left, he looked at it. A couple screws had come loose. It started right up. And he learned a lot about her daily routine and her bank accounts.

Luckily for her, he erased the hard drive before passing it on.

He’ll do that for you too, if you donate your used laptop to him.

His Laptop Project, as he calls it, boasts not one but two origin stories, as they say in comic books.

The first concerns his development of the superpower of laptop repair.

The year was 1999. He was about 21. His laptop was two years old. “I found out there was an upgrade kit to add a CD-Rom drive. I bought it, and completely did it wrong,” he remembers.

But like a true hero, he wasn’t deterred by failure.

“When I put it back together, I knew what I did wrong,” he said. “I knew I needed someone with more experience.” So he discovered online guides showing how to take laptops apart — and how to put them back together. And he discovered his hunch was right: This was something he could do.

Then he discovered that his superpower could not only make him some money on the side — by day he’s a mild-mannered employee of a firm he prefers to leave nameless — but actually help people.

“Someone told me they knew a homeless guy who was trying to get a job. He had a laptop, but someone stole it at the shelter. Did I have something?”

Well, he had a small Sony laptop “that was really underpowered, but that he could hide.”

That was his first taste of high tech philanthropy.

At first, philanthropy was a highly informal sideline to his tech repair work, which itself was a sideline. Someone would give him a laptop in barter for repairs. Someone else might ask for help taking files off an old laptop, and leave the cleaned machine with him. He would put the old machines on a bookcase. (He won’t take in desktops and monitors, because they take up too much space.) And then someone would tell him about a person who needed a laptop.

In the past couple of months, he has sent laptops and tablets to a child with special needs in Boro Park, to people who lost their computers to flooding in Texas, to a struggling graphic artist, and to someone running a physical therapy program in a hospital whose patients have to practice their typing.

He does not work only with Jews, and he does not vet recipients, choosing instead to take them at their word.

Some machines he collects still are usable. Others are broken — but, he said, “every three or four machines that are broken equal one good one.

“I got a machine a year ago that had a dead keyboard. It was an expensive keyboard. Someone came over last week with the same model. He had shattered the screen and shorted the motherboard.” The keyboard, though, was intact. One keyboard transplant later and the machine was on its way to help a nursing student.

About that laptop in the oven. It seems that certain 2007 Hewlett Packard and Apple laptops have a design flaw — the graphic card is soldered into place incorrectly. When the computer is used, the card heats up and the solder begins to melt. Over time, the graphic card disconnects and the screen goes blank.

The fix sounds easy: Turn the laptop upside down, heat it until the solder flows back into place, and then let it cool down.

There are three ways to do it, Mr. Luchins said. There’s the so-called blanket fix: Wrap the laptop in a blanket. Turn it on. The laptop heats up, and voila — either the card is resoldered into place, or you’ve just set a blanket on fire.

You also could open up the machine and very, very carefully solder the board back into place.

The third way is slightly less chancy. “You take off the motherboard — that’s an hour of your life — put it in an oven with a 400 degree temperature and it will reflow the solder.” That will fix it, at least for a few more years.

Still, Mr. Luchins didn’t feel up to the task, and his stash of 2007 laptops kept growing. Until one day he found someone with the experience and chutzpah to try the oven technique on his behalf.

What: Mordechai Luchins is happy to take your laptop, working or broken,
and help shepherd it to a new home.

Where: Email him at typolad@gmail.com

The oven man is just one of many people who entered the Laptop Project’s orbit.

“People are naturally giving,” Mr. Luchins said. “People don’t want to hoard this stuff. They want to help other people. Almost everyone is very quick to say they have something, or they know someone, or my company can do this if you can find me a tax letter.”

As of this week, he has non-profit status. A batch of corporate castoffs that arrived last week will push his total count of laptops delivered to 100 by the end of the month.

“Here’s where I have a skill and can help someone other than myself,” he said. “If I can entertain myself at the same time, why not?”