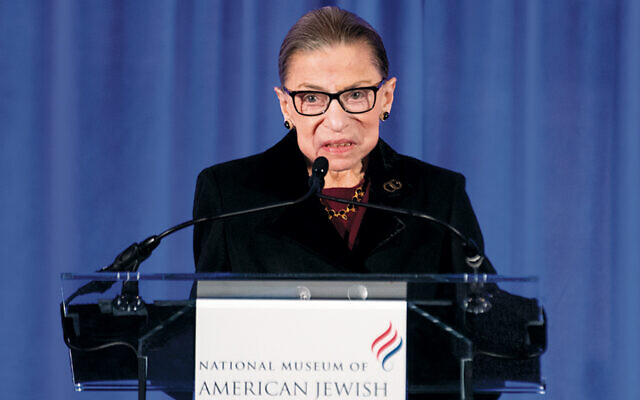 On December 19, Associate Justice Ruth Bader Ginsburg, 86, received the Only in America award at the National Museum of American Jewish History in Philadelphia. She is a mensch on the bench.

It was bone-chillingly cold outside but decidedly warm in the packed auditorium for the ceremony honoring this extraordinary American trailblazer, the first Jewish woman (and the second woman) to serve on the Supreme Court. When RBG entered the room, she immediately was greeted by the first of many standing ovations from the 600 attendees, who represented several generations of admirers (and who also included Pennsylvania’s Governor Tom Wolf and First Lady Frances Wolf.)

As the award’s twenty-first winner, Justice Ginsburg joined an illustrious group of American Jews that include Emma Lazarus, Louis Brandeis, Albert Einstein, Golda Meir, and Isaac Bashevis Singer, who “embody hard work and aspiration, courage and imagination, leadership and service” and who “impacted American society and culture, often despite facing anti-Semitism and prejudice.” It was especially fitting to have this induction take place on the historic Independence Mall, not far from the iconic Liberty Bell, which is inscribed with the stirring words from the Book of Leviticus, 25:10: “Proclaim Liberty throughout all the land unto all the people thereof.”

When this special ceremony was first announced several weeks ago, it sold out in less than three minutes, as if it were a rock concert. Nina Totenberg, NPR’s legal affairs correspondent, was the emcee for the 90-minute love fest. She described the honoree as “a respectful but fierce dissenter.” Ms. Totenberg affectionately called Justice Ginsburg “my friend,” adding that she is “the sister all of us hope to have, and the ultimate sister to us all.”

Irin Carmon and Shana Knizhnik, co-authors of the best-selling book “Notorious RBG” and curators of the special exhibition on view at the museum, talked about Justice Ginsburg wearing her dissent collar while delivering fierce warnings like the one related to Shelby County vs. Holder, a 2013 case that removed protections from the Voting Rights Act of 1965. This resulted in the celebrated nickname Notorious RBG. Melissa Murray, a professor at NYU’s School of Law, spoke about the justice’s longstanding and persistent work on legislation dealing with gender equality and racial issues going back to the 1970s. That was well before President Clinton nominated Ms. Ginsburg as a justice; she took her seat on August 10, 1993.

In addition to her acclaimed legal career, this bubbe also is an avid opera fan. She often goes with Kenneth Feinberg, the Washington attorney and the special master of the 9/11 Victim Compensation Fund, to weekend simulcast performances of the Metropolitan Opera that are broadcast at D.C. area movie theatres. In his thick Boston accent, Mr. Feinberg talked about his close friend’s uncanny ability to recall specific live operatic performances that she had been to decades ago. He added that RBG has been actively involved with planning the opening concert of the Washington National Opera’s 2025 season, which she plans to attend.

As a musical tribute to the Supreme Court Justice, Alexandria Shiner, a soprano and Washington National Opera Young Artist, performed Leonore’s solo aria from the sixth scene of Beethoven’s “Fidelio.” It includes these poignant lyrics: “I follow my inner calling, Waver I shall not, Strength I derive from faithfulness and love.” Accompanied on the piano by Robert Ainsley, the director of the Washington National Opera’s Domingo-Cafritz Young Artist Program, Ms. Shriner also sang “God Bless America,” written by Irving Berlin, one of the initial 10 inductees to the Only In America gallery and hall of fame.

Following a short biographical film tribute, Justice Ginsburg stepped up to the stage as she received yet another standing ovation. She spoke with gusto for about eight minutes, proclaiming the evening “pure joy.” (Someone already had said that she had done 20 planks, her isometric strength exercises, that morning.) She talked about using her Jewish heritage as a personal guide for what justice must do, underscoring that “the demand for justice runs through the entirety of Jewish tradition.”

Ms. Ginsberg credited two Jewish women as role models. They are Emma Lazarus and Henrietta Szold; both also are included in the museum’s Only In America exhibit.

Justice Ginsburg recited the meaningful words from the Emma Lazarus poem that appears on the bronze plaque attached to the pedestal of the Statue of Liberty: “Give me your tired, your poor, Your huddled masses yearning to breathe free, The wretched refuse of your teeming shore.
Send these, the homeless, tempest-tost to me.
I lift my lamp beside the golden door!”

In discussing Ms. Szold, RBG pointed out that “she knew how to say no.” Since women were not allowed by Jewish tradition to say Kaddish, a male friend offered to recite the mourner’s prayer for Ms. Szold’s mother, but Ms. Szold, who founded Hadassah and was an early Zionist, refused his offer, declaring “I must do it for the generations of my family.”

Justice Ginsburg concluded by reading this: “Men presumably dominated women from the very beginning because of their greater physical strength; it’s men who earn a living, beget children, and do as they please. Until recently, women silently went along with this, which was stupid, since the longer it’s kept up, the more deeply entrenched it becomes. Fortunately, education, work, and progress have opened women’s eyes.” It was gripping to hear that these words were from one of the final entries in Anne Frank’s diary.

Before returning to her seat, Justice Ginsburg received yet another exuberant standing ovation, which lasted several minutes.

RBG embodies tikkun olam. Jerry David, the senior rabbi of Temple Emanuel in Cherry Hill, felt “it was a once in a lifetime opportunity and was proud to have been there.” He said that Justice Ginsburg is “petite but mighty and reveals how one person pursuing justice can certainly make a difference and be an inspiration to every generation.

“One light can light up the whole world,” he added.

Fred B. Adelson is a professor of art history at Rowan University and attended this historic ceremony. He wrote our cover story about the RGB exhibit on November 1. Email him at fbadelson@gmail.com.