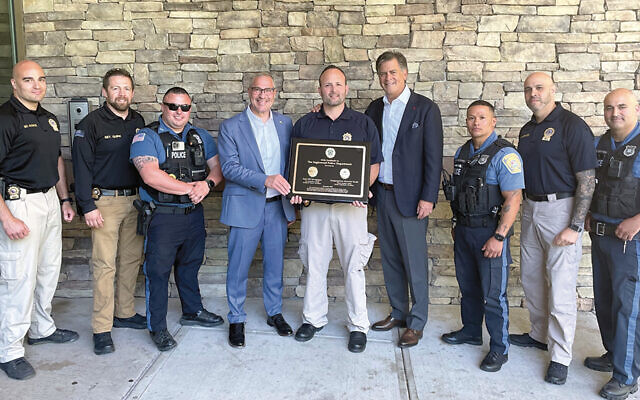 On the second day of Shavuot, June 6, about 10 Englewood police officers and detectives sat in the front pew of the main sanctuary of Congregation Ahavath Torah at the end of services. About 600 members of the shul, including Englewood Mayor Michael Wildes, filled the rest of the seats.

It was not a security incident that brought Englewood’s finest to shul that day. They were there to receive a plaque of appreciation from the community and to present one of their own.

Ahavath Torah’s president, Danny Federbush, explained that toward the beginning of the pandemic, the president of the East Hill Synagogue, Jonathan Thurm contacted him to say that East Hill was interested in renovating the staff gym at the Englewood Police Department as a gesture of goodwill and gratitude.

“And before he could even finish, I said, ‘We’re in. Send me the bill,’” Mr. Federbush recalled.

Ahavath Torah had recently raised money to start a First Responders Fund, and the executive committee agreed to use this fund to pay half the cost of the gym renovation.

“It got completed about a year ago,” Mr. Federbush said. “Whenever I see police officers, I ask how the gym is and they always express gratitude about it, so we decided to present a plaque to hang in the gym and they gave us a plaque too. It was an amazing feeling in the synagogue — they got a huge ovation from the community.”

Captain Matthew de la Rosa, who has served with the force for nearly 20 years, said that when East Hill’s leadership reached out to discuss what they could do for the police officers, the discussion moved toward replacing the station house’s antiquated and inadequate gym equipment.

“Especially now, after years of a lot of anti-police sentiment in this country, it was so nice to have a concrete gift of thanks and appreciation — a gift that the officers can truly enjoy and that contributes to their health and safety,” Capt. de la Rosa said.

“These men and women leave their families every day and face dangers. And to have that sincere love, appreciation, and respect from the community for what they do, I can’t really describe how incredible it is. That’s why we went to present them with a plaque. The ceremony really took me aback, and I got emotional.”

Ahavath Torah’s rabbi, Chaim Poupko, recited a prayer for the welfare of the members of the Englewood Police Department. He explained that it was an adaptation of a prayer he composed in 2009 at the request of a congregation member whose daughter is a police officer.

Translated from Hebrew, the prayer reads: “May He who blessed our patriarchs and matriarchs, Abraham, Isaac, and Jacob, Sarah, Rebecca, Rachel, and Leah, bless the members of the Englewood, NJ Police Department. May the Holy One, blessed is He, protect and deliver our police officers from any trouble or distress, affliction or sickness. And may He send blessing and success to all the work of their hands and may they find favor in the eyes of God and humanity alike. May they fulfill their duty in complete spiritual and physical health. And may He grant peace in our cities and streets and tranquility to their inhabitants.”

Rabbi Poupko told the police officers that they are “fulfilling a divine mandate to keep watch over all of God’s children. May God bless in your holy endeavors. Furthermore, we at Congregation Ahavath Torah are able to sit in these pews without having to worry about our safety because of the wonderful relationship our synagogue security committee enjoys with the Englewood Police Department.

“Our security volunteers are strengthened by the seamless cooperation you provide and the special relationship we are privileged to have with you.”

Mr. Wildes praised “the stellar service of our police department” and said that “they needed to see the love at a time when communities have grown socially distant from one another. Nothing hits the mark more than letting all the officers who put themselves in harm’s way for the residents of our city to know how much we love and respect the nobility of their work.”

Mr. Wildes, who was an NYPD auxiliary police officer for 10 years, said he appreciates the “professionalism with which they” — the Englewood police — “approach their work. Whether called on to handle domestic violence, bears on the loose, or fatalities, they have particular grace and good instincts.”

Mr. Federbush said that many congregants approached the police officers at the kiddush after the ceremony to express their gratitude personally. Some of the shul’s members even suggested starting an annual police appreciation Shabbat.

“It was such a special moment, especially now when police often are victimized, to get a show of enormous love and appreciation from our community,” Mr. Federbush said.

“I think it would be great if other communities would do this in light of their challenges today. It does a tremendous amount to foster a warm understanding between the Jewish community and law enforcement.

“The job of a police officer is never easy. We hope that our gesture helps provide the strength and motivation that the members of our police force need to continue to do their vital work.”