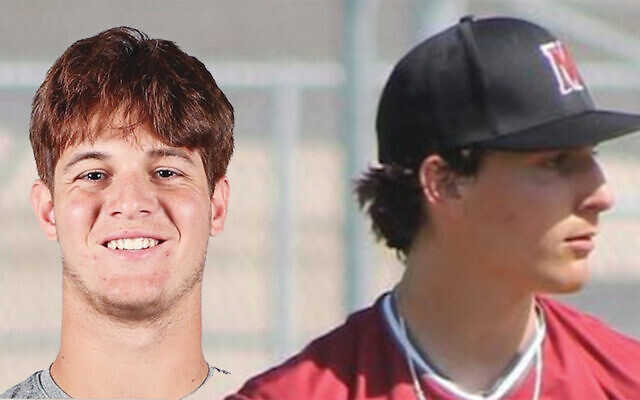 Skipping the game on Yom Kippur is no longer the big leagues when it comes to Jewish observance on the baseball diamond.

And on the following day, it drafted its second.

Steinmetz, a 6-foot-5, 220-pound pitcher, spent the past year at ELEV8 Baseball Academy in Florida, honing his mound skills while attending the Hebrew Academy of the Five Towns and Rockaway on Long Island by Zoom. His fastball reportedly has reached 97 miles per hour.

Steinmetz keeps kosher and observes Shabbat, but he also pitches on Saturdays. To avoid using transportation on Shabbat, he has booked hotels close enough to games that he can walk to them.

Starting pitchers in the big leagues pitch only every five days, so his schedule theoretically could be planned to skip Shabbat.

Steinmetz comes from an athletic family — his father, Elliot, played basketball at Yeshiva University and now is the New York school’s basketball coach. He had coached the team to record success before the pandemic.

And then on Tuesday, the Washington Nationals selected Elie Kligman.

Kligman, 18, has moved toward becoming a catcher but also has played shortstop and thrown the ball 90 miles an hour as a pitcher.

“That day of Shabbas is for God. I’m not going to change that,” he told the New York Times in March.

His father, Marc, is a lawyer and licensed baseball agent, and he represents his son. On Tuesday, Marc Kligman was traveling with Israel’s baseball team, now on a pre-Olympics road trip full of exhibition games across the Northeast, when he heard the news.

The Kligman family are members of Chabad of Summerlin, a suburb of Las Vegas.

Despite the excitement of being drafted, Kligman likely will play at a Division I college program before he begins a professional career, his father said.

“Here’s a kid who won’t put God second,” Marc Kligman told the Times. “But he believes that the two can coexist. He’s got six days of the week to do everything he can to be a baseball player, and if colleges and Major League Baseball aren’t inclined to make any changes, then we’ll take what we can get.”