Cantor Israel Singer sings in the courtyard of the Jewish Home at Rockleigh as a resident looks out his window.

The Jewish Home at Rockleigh has seen many changes over the last several months as it adapts to the limitations imposed by the novel coronavirus. Now, according to Sunni Herman, its executive vice president, it is a time of healing.

“We’ve been doing a lot of [covid-19] testing and it’s coming back with people testing negative,’ Ms. Herman said. “Our elders are strong and getting stronger every day.”

To help residents transition from isolation to sanctioned interaction, the Jewish Home has launched Project Outside. “While we’re very lucky that every room is private, we’re trying to get our seniors out of their rooms, and outside, to the courtyard and the lake,” Ms. Herman said. 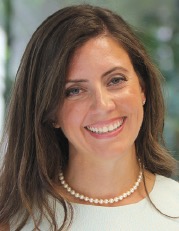 Burgeoning lakefront activities now include exercise programs, music programs, singing, and even refreshments. “We’re trying to get elders outside whenever possible,” she said; staff helps members go outside, ensuring that they are appropriately distanced from each other. “Project Outside has been a very big part of healing, even just opening windows, and people waving their hands.” Ms. Herman also noted the importance of eating and drinking. “We’re giving out tons of shakes and high-calorie healthy drinks to keep up spirits.”

Windows have taken on a new importance for the seniors. In recent weeks, families were been allowed to visit their elderly relatives only through the windows of the rooms. That has just changed — as of June 21, visitors have been permitted to see residents “outdoors on our premises, according to the guidelines set by the New Jersey Department of Health,” Ms. Herman said.

Israel Singer has been the cantor at Temple Emanu-El of Closter for the last 30 years; before he came to the United States from his native Israel, he sang at the Great Synagogues of Tel Aviv and Ramat Gan, and he was a guest cantor at the Great Synagogue in Jerusalem. Recently, he has worked hard to raise the spirits of Jewish Home residents — from the other side of their windows.

But, he says, the pleasure is all his.

“I’m in heaven,” he said, describing his Tuesday evening serenades. “I used to visit the residents, many of whom are from our shul, on a regular basis. It’s a kind of frustration. I can’t go to the hospital and we don’t have normal services in shul.” So when congregation member Danny Rocke asked him to sing for his wife, Jill, at Rockleigh, he was immediately receptive.

When Mr. Rocke suggested bringing Cantor Singer to sing outside the building, Ms. Herman realized that his concert could reach all the residents. So every other Tuesday at 7 p.m., “we open up all the windows facing outside and use the in-house system to livestream his concert to TVs and Facebook.” That way, listeners can also enjoy the music from their own rooms.

“I stand in the courtyard with a microphone,” Cantor Singer said, clearly enjoying his experiences, seeing people at their windows “swaying from side to side, like in Italy and Israel, where people sang from the porches.” Because they came to their windows, “The singing caused them to come and see each other and strengthen each other. They saw their neighbors. It caused a lot of emotional enthusiasm.”

Although the Jewish Home has residents there for a large number of reasons, “most of them are Jewish,” Cantor Singer said. That explains his repertoire. At his first hour-long concert, “I sang some upbeat songs and some older songs people would be familiar with. The next time, I sang a mix of religious, Israeli, and some Broadway music, plus some popular songs they know. They love everything. The audience is amazing.”

For his part, “I enjoy it tremendously. It warms my heart. I can actually help people by using my own talent. It’s an amazing thing, and I thank God for giving it to me. It was nothing I expected.”

Ms. Herman said that when she looks around during the cantor’s concert, “everyone is at their windows. One song is more uplifting than another.” Cantor Singer provides introductions to each piece, and “it’s purely magical. They love it. The staff love it. Everyone is clapping; the TVs are on. It’s a one-man cabaret show.”

The Jewish Home has “an incredible relationship” with Cantor Singer’s synagogue, where members go monthly for minyan and Kiddush, she added. When Rabbi David-Seth Kirshner put together a virtual seder this year, it was shown on all the residents’ TVs.

“It’s awesome watching Cantor Singer dance around uplifting spirits through music,” Ms. Herman said. “And he’s doing this as a volunteer. You can tell how much he feels he’s getting from it. He thanked me for giving him the opportunity to do this mitzvah.”