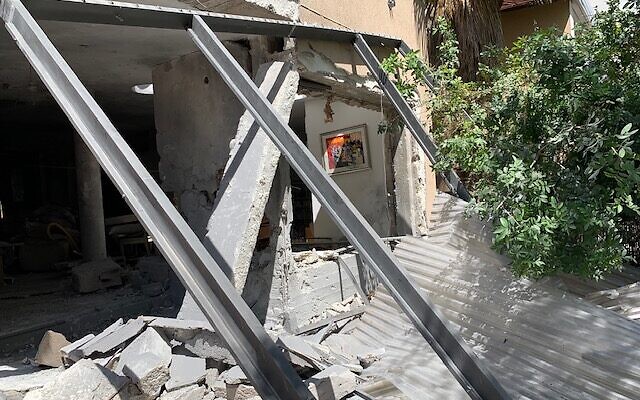 A house in Ashkelon hit by one of the more than 500 rockets fired at that city by Hamas.

“The guardians of Israel neither slumbers nor sleeps” and neither do we – today was a busy, action packed day of our JFNA emergency solidarity mission. It included visit to an Iron Dome battery with a special briefing, meeting Tali Levanon and learning about the critical work of the Ashkelon Resilience Center and other Israel Trauma Coalition work, visiting a JAFI Absorption Center together with JAFI CEO Amira Ahronoviz to hear from new Ethiopian immigrants, visiting Sigal Arieli of Ashkelon whose home took a direct hit from a missile, and engaging dinner back in Tel Aviv for former UN Ambassador Danny Danon, Lt Col Jonathan Conricus, the IDF Foreign Media Spokesperson, and other unnamed special guests. It is incredible to see the impact Jewish Federation has and each of you who partner with us or made a recent gift to the emergency campaign are making a huge difference and impact.

But I want to focus on a measure of time, specifically 20-30 seconds. It already took you longer to read this blog.

Remember when Covid started and the CDC stated that it was imperative to wash our hands for a minimum of 20 to 30 seconds to protect us from Covid? I thought that was crazy.

Well, the people of Ashkelon have that same amount of time – 20 to 30 seconds – to run to a shelter or safe room to protect themselves from incoming missiles from Hamas. That’s approximately 140,000 people who have to live this way.

Would you? Would anyone or any country accept this?

During the recent conflict with Hamas there were days when over 500 missiles were fired by Hamas at just Ashkelon. If that is not terror and war crimes, what is?

I want to be very clear and I task you to emphatically state on social media and to your friends, neighbors, and colleagues that there is no moral equivalence between the terror regime Hamas and democratic Israel. Israel seeks to limit causalities of Israelis and Gazans/Palestinians. Hamas does the exact reverse and seeks to maximize causalities of Israelis and Gazans/Palestinians as they fire thousands of missiles at Israeli civilians while hiding among their civilians. Israel invests in the Iron Dome, a defensive system and Hamas invests in missiles and attack tunnels, offensive warfare.

I will leave you today with for me the most emotional story I heard today from a mother in Ashkelon who describe the trauma and PTSD from years of living under missile and arson balloon and other attacks. Her young son was having a birthday party the other day but they could not have birthday balloons because for her son now balloons represents danger and fire and danger. My grandson, Noah, is turning 2 next week. I will think of that as we have balloons at his birthday party.

I have been involved with The Koby Mandell Foundation and helping victims of terror since 2002. Sometimes I wonder if the entire country and people of Israel are victims of terror. We cannot accept this in Israel, USA or for Jews anywhere. Jewish lives also matters.

Lee Lasher is president of the Jewish Federation of Northern New Jersey.