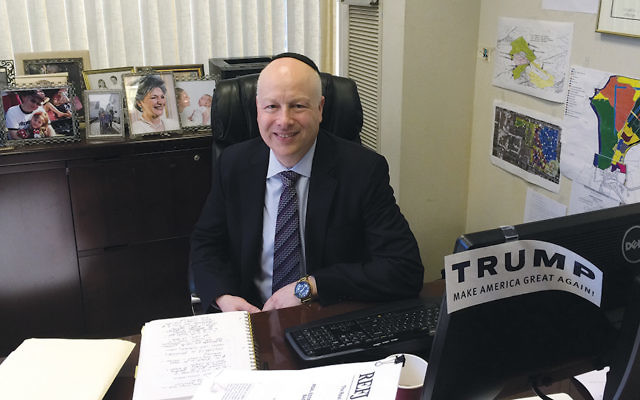 It’s not often that a career as a real-estate lawyer leads to a role as an Israel adviser to a front-running candidate for president.

In fact, it’s quite possible that it never happened to anyone until it happened to Jason Dov Greenblatt of Teaneck. But on April 14, Donald Trump told reporters that Mr. Greenblatt, who is 49, would be his lead adviser on Israel.

Mr. Greenblatt’s day job is to be the Trump Organization’s chief legal officer, in charge of his legal staff — six on the transactional side and three in litigation — and personally involved in all his legal matters that do not involve litigation.

And now, he is joining another lawyer, David M. Friedman of the New York law firm Kasowitz Benson Torres, as Mr. Trump’s sources of context and wisdom about Israel and the Middle East.

“Donald and I have spent time talking about Israel over the years,” Mr. Greenblatt said. “He takes input from me, and from others as well, including his son-in-law, Jared Kushner,” who is Jewish. “He wants to be able to rely on people, to hear their views, and he thought that I would be a good person to listen to and get ideas from.

According to the JTA Wire Service’s Uriel Heilman, who was at the meeting with Mr. Trump, “when Trump identified Greenblatt last week as his top presidential adviser on Israel, it appeared to me a spur-of-the-moment decision.”

“‘I knew that he was relying on me for certain aspects of Israel, but I didn’t know I was his top adviser,” Mr. Greenblatt said. “I felt fortunate he said it.”

No, this is not the conventional background for a presidential adviser, Mr. Greenblatt told the Jewish Standard, but “I’m not sure that there really is any prototype for this role any more. Who has had an experience in this role in the recent past who has managed to successfully achieve something?

“I’m not sure there has been. The world has changed. Look at the Arab Spring. Everything has changed since then.

“There are people who know more than I do, for sure, but does that mean they will be successful at changing anything?”

Mr. Trump will be successful, he said. “Donald is a master negotiator, and people will want to sit at a table with him and make transactions. That’s what he brings to the table. We would be there for support and ideas, but it is Donald who has the knowledge, the experience, the capabilities to sit across the table from the Palestinians.

“And yes, I hope that I would be at the table too — but we’re getting a little ahead of ourselves,” Mr. Greenblatt said.

Mr. Greenblatt’s positions on Israel are similar to those of his boss. Like Mr. Trump, Greenblatt supports a two-state solution, as long as it is reached by the parties themselves and not imposed by an outside body like the United Nations. He does not believe Jewish settlements in the West Bank are a core part of the problem.

U.S. negotiators “need to lay down the law and explain that the [Palestinians are] not going to get the benefits they get from the United States unless they come to the table,” he said. “I think they need to say: ‘Over the course of the next period of time, we will continue to provide funding, but in order to do that you need to do X, Y, and Z, set concrete goals, and if you don’t we need to start tapering off the funding,’ and see what happens.” 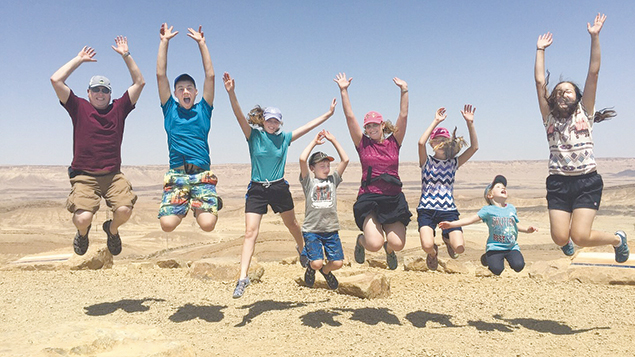 Asked how the Iran nuclear deal should be handled, Mr. Greenblatt said that it’s too late simply to tear it up — but he’s not sure how to proceed. “I’m not an expert on it to answer that question adequately,” he said.

A real estate lawyer from the start of his career, Mr. Greenblatt spent a few years as an associate at Fried, Frank, a well-known New York law firm. Then, in the mid 1990s, “I started a cappuccino company, which was great for a while, until Starbucks made its inroads in a huge way,” he said. “An Italian company developed the precursor to the pod machines that are all over offices now, and I put machines all over Penn Station and the New York City airports.” Then Starbucks happens, and “I sold the machines and went back to practicing law.” Actually, he said, he never stopped practicing law completely — “Fried Frank was very good to me, and they let me work there full time to finance the cappuccino company.”

But he wanted to get married, so he moved to another law firm, where he could work full time, and then his phone rang. It was a headhunter for the Trump Organization. “I went for an interview, and it was great. I hit it off with the general counsel, and then I had an interview with Mr. Trump.

“I thought it was a fantastic interview. I went back to the general counsel’s office, and it was great, and then he realized that I was shomer Shabbes, and something changed. He said that he had to check something, and wasn’t able to extend an offer to me. I can’t say that he definitely would have done it then, but the writing was on the wall.

“It was a Friday afternoon, and I went home and said ‘I can’t believe that this is 1996, and I won’t get a job because I’m shomer Shabbes, but it is what it is.

“And then he sent me a fax and extended the offer, and it’s all been great.” He began to work for the Trump Organization in January 1997.

Mr. Greenblatt is intensely loyal to Mr. Trump. When he was asked how Mr. Trump’s style, which can seem both rude and crude to onlookers, would work at the negotiating table when the subject is peace between Israelis and Palestinians rather than a real estate deal, he protested. “He is not rude and he is not crude,” Mr. Greenblatt said. “He is not the things he has been accused of by the media. The media will take a sound bite, and the sound bite itself becomes a story. It is a snowball effect.

“Of course you don’t get to be as successful as Donald without being tough, but he is a unifier.”

But wait. The debates were not sound bites, and Mr. Trump’s comments were not distorted by the media; instead they were reported by cameras. “But those were debates,” Mr. Greenblatt said. “It’s not my style — but then I wouldn’t be on the debate stage, or in politics in general. He was getting attacked by all sides — at first there were 17 candidates, remember, including him — and so it is hard for me to sit here and ask ‘How can you speak like that?’

“Politics is a tough business, but he is not rude and he is not crude.”

Mr. Greenblatt has a very active life outside of the Trump Organization. He and his wife, Naomi Greenblatt, a psychiatrist who “specializes in women’s emotional health,” have six children. The three oldest are 17-year-old triplets — Noah, Julia, and Anna — and then there is 13-year-old Sophia, 10-year-old Avery, and the baby, 5-year-old Vera.

The family travels a great deal — “traveling is a passion of mine,” Mr. Greenblatt said — and they write about it. So far, Mr. and Dr. Greenblatt have published three travel books; about Israel, about New York City, and about how to travel as a family.

Together (except, so far, for Vera) the family runs a parenting blog. “We were on a cruise about three years ago, and we stopped at a port in Turkey, one of those market towns,” Mr. Greenblatt said. “There was all that Gucci and Prada, for amazing prices, and my wife and I wouldn’t let our kids buy any of it. It wasn’t real, none of it. I work for a very big brand, and I am very sensitive about counterfeiting.

“The kids understood, and I asked one of them, Noah, to write an article about it. He wrote it and read it to the family, and we posted it on line

“And then EL AL had that pricing glitch, where people were able to buy tickets on line dirt cheap. It was an error. We had a discussion about whether it was appropriate to buy them. It was not a halachic discussion — I am not a rabbi — but it was about emotions and morality.

“That’s how the site morphed. Our goal is to use the stories of people we interact with to try to spread values, ethics, and morals. It’s not geared only to Jews. One of my daughters just wrote about the Malala fund.

“We read these stories at the Shabbes table. My kids enjoy reading them, and most — not all but most — of our guests enjoy them too.

As for travel — “We want to get out the word that the more you put into trips, the more you get out of them. We find that people are taking trips, spending money, and coming home slightly dissatisfied. I do a lot of research, and then we’re flexible.

“I can tell you from experience, having six kids and many trips around the world, I am able to say that every trip we have taken has been incredible.”

Why does he do this? “Our kids are only under our roof for a short time,” he said. “We feel that it is a very precious time for our family. We wanted other parents to see that vision, and to realize that vacation isn’t only down time, but a chance to bond.”

If Mr. Trump should win the presidency, would Mr. Greenblatt and his family — who belong to Congregation Keter Torah — give it all up to move to Washington?

No, Mr. Greenblatt said. “We are so entrenched in Teaneck, and it is such an amazing community, that if I were fortunate enough to have Donald ask me to play some sort of role, I probably would commute.

“I wouldn’t want to uproot my family from Teaneck.”

Getting married during a pandemic
By Eve Tilem
Covid-19 can change plans, but it cannot take the love from a wedding

The covid diaries — covid 2.0
By Jonathan E. Lazarus
I don’t mask my scorn from those who won’t wear one

JFCS-NNJ bike/hike to fight hunger will be virtual

Banji Ganchrow
Rate times time times social distance
Math is not my thing. At all. My recurring nightmare is not being prepared for a math test and if I don’t take the test, I cannot graduate high school. My vision of what my hell will be like is an eternal algebra class.... Continue Reading

Banji Ganchrow
Self-care, quarantine edition
I  have been trying very hard to keep these columns light, for the most part. No one needs to have the obvious pointed out to them. The isolation, the loneliness, the fear of the unknown — all you have to do is watch a news... Continue Reading
Rabbinical Council of Bergen County issues new pandemic guidance
By Rabbinical Council of Bergen County