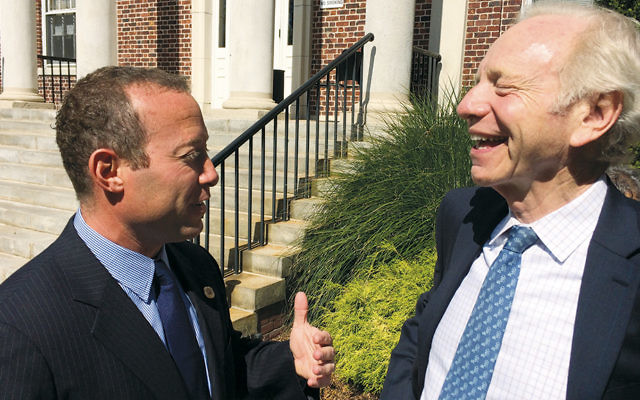 This year, voters in the still-fairly-new Fifth Congressional District are faced not only with two very different candidates — that’s true every year — but with a challenger who has a genuine chance of winning the election.

This year, the Democrat, Josh Gottheimer, who is facing the seven-term incumbent, Scott Garrett (whom we wrote about last week), is buoyed by support from the Democratic National Committee, the Republican Party’s seeming meltdown, his own fund-raising prowess, and the fallout from some of Mr. Garrett’s controversial positions. Although it generally is very hard for a challenger to beat an incumbent, in this unprecedented election season anything is possible.

Like Mr. Garrett, Mr. Gottheimer, 42, who lives in Wyckoff, is a Jersey boy; as we’ve written in earlier stories, he is from North Caldwell. He also was a bit of a wunderkind. When he was 16, he became an intern for Senator Frank Lautenberg, and by the time he was 23 he was a speechwriter for President Bill Clinton. More recently, after earning a law degree at Harvard, he alternated between working at the Federal Communications Commission and for Microsoft.

And now he’s running for Congress, as a firm believer in the kind of across-the-aisle collaboration he learned from Mr. Clinton.

“You have to work together, with civility, to solve problems,” he said.

Civility, of course, is in stunningly short supply right now. “There is an undercurrent of extremism that is an offshoot of Donald Trump’s candidacy,” Mr. Gottheimer said. “People obviously are angry”; Mr. Trump is both amplifying and directing the anger.

Some of that anger is aimed at him, Mr. Gottheimer said. He is actively Jewish — he and his family belong to Barnert Temple in Franklin Lakes, and he studies with a local Chabad rabbi when he can. He is getting tweets that accuse him of heinous crimes — chief among them but not restricted to the crime of being Jewish — and that tell him that there are people who will glory in another Holocaust, and his flaming death in it. More specifically, he is accused of being in the pockets of “the hassids” and “that I will fight for Israel, not for the U.S.,” Mr. Gottheimer said.

This election is stirring mud and surfacing demons. “It’s open season on Jews, and I am seeing it,” he said.

Still, Mr. Gottheimer is a strong proponent of working across the aisle. “The best way to govern is from the middle,” he said. “Extremism is undermining progress. But people in the district have been remarkably supportive; we are finding support from Democrats and Republicans and independents. It’s a broad coalition, and that’s who our district is.”

He learned the idea of broad-based coalitions from President Clinton. “The Republicans called it triangulation, but it was a willingness to look at an idea from across the aisle, and to work with it if it was a good idea. He was willing to sit down and work with Republicans to get things done.”

One area in which Mr. Gottheimer and Mr. Garrett disagree is the question of LGBT rights and same-sex marriage. “I think that people should be able to love and marry whomever they want, and I don’t think it’s the government’s role to dictate that. I want people to be happy. Why should we stand in the way of people’s happiness?

“I understand the religious objections to it, but the world is changing, and it is now the law of the land. It’s like any other civil right, in any sphere. And it is not the government’s business to tell people who they should love.”

Mr. Gottheimer is also in favor of a woman’s right to choose to terminate a pregnancy. “It always confuses me how people can be against the government playing a role in so many areas, but not here. I have never understood why the government should get between a woman and a doctor.”

Despite the Democrats’ reputation as the party that has never met a regulation that it does not like, if he wins, he said, “I want to get rid of outdated regulations.” That’s part of his innately sensible centrist approach. “I don’t want to be getting in the way of business,” he said.

Mr. Gottheimer believes that there have to be clear lines between church and state, “and part of the job is making sure that the government ensures that people can practice their religion freely.” Part of that, he added, is to be sure that government continues to give shuls grants to improve their safety.

As for him, “my Jewish background has had a deep impact on me,” he said. “Everything I learned, growing up, both culturally and in Hebrew school, affected my values. It’s how you treat each other, how you talk about each other. It’s always been about social justice, and also hard work and decency and respect. There’s the idea of making your family proud, and of doing right by people. That’s had a big impact on everything I’ve done.

“Religion has taught me not to leave out hope, and to be very careful about what happens when you get into the business of judging others.” Self-righteousness is a snare, he warned.

Bucking his party, even as he worked to raise funds for his election, which at first was an uphill climb, Mr. Gottheimer came out strongly against last summer’s Iran deal. He is also strongly against the Boycott, Divestment, and Sanctions movement, which, in a surfeit of self-righteousness, is trying to strangle Israel’s economy. “Israel is a beacon of democracy,” he said.

Mr. Gottheimer minces no words about the Republicans’ presidential nominee, Donald J. Trump. “He represents exactly what is wrong with government,” he said. “People have lost faith,” but Mr. Trump does not offer them realistic hope. “Two things in particular deeply concern me,” he continued. “It’s how he talks about other people and how he behaves toward women. As the father of a young daughter — and I also have a wife and a sister and a mom — I am very concerned about his ability to lead, and to control his temperament.

“It’s very dangerous. I have worked in the White House, and I have seen how you have to stay even and make smart decisions every day, about domestic and foreign issues.

“You can’t take the bait when it is thrown at you. You have to stay steady.” As Mr. Trump has shown, he cannot do that, Mr. Gottheimer said.

“It’s all about hatred, it’s about how we treat people, and about the disrespect for our institutions. I believe that people want someone who will go and fight for their district and their institutions.

“When you get to Washington, you have to be willing to sit and talk to people who don’t share your point of view. That takes extra energy, more than you need to spend time with just your amen corner.” But that’s necessary energy, he said.